We’ve been controlling game characters as an industry now for around forty years, and while it’s arguable that even the earliest protagonists packed enough character-per-pixel to inspire empathy, playing out the pathos of game characters – let alone relating to them – is still a comparatively recent innovation. While adding voice and reaching towards more cinematic storytelling has allowed for even the most basic NPC model to emote with some degree of conviction, most narrative relationships play out tangentially (or wholly separate from) the minute-to-minute gameplay.

To a more relate-able end strides Lo and Behold! Games’ Mental Drift, the first title to be published under Extra Credits’ Indie Fund. Drift attempts to bridge the gap between character and gameplay by making the thoughts of its protagonist into tangible in-world mechanics. Will making the inner workings of the mind literal offer a new perspective into the relationship between play and emotion? We sent some questions to the desk of the game’s Creative Director, Richard Weschler, to get the early details. 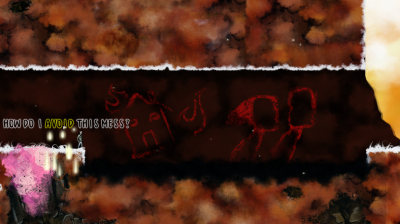 Elder Geek (EG): Let’s begin with a bit of an introduction to Mental Drift, how would you describe the nature of the project and its intended final build?

Richard Weschler (RW): Mental Drift is a puzzle game that combines platforming and adventure elements.  Like an adventure game, the player can press a button to show the main character’s thoughts and learn more about the world around them. Those thoughts show up as text, and each word of that text becomes a tool that can be used to impact the world. Drag a word to use it as a platform, apply the meaning of a word to an object, and so on. The narrative is key to solving puzzles and overcoming obstacles.

EG: That central component has been demonstrated fairly linearly up to this point. In how many different ways will players be able to

interact with their character’s thoughts?

RW: We’re trying many different ideas. Some examples you can see in the game now apply the meaning of the word to an object. For example, you can apply “bounce” to an object and it will bounce. One puzzle that’s been popular in our play-tests lets you make a thought solid, so it has physics and can shatter when you drop it. We have more ideas along those lines, and the more we try out the more we’ll decide which ones we like. We’ll definitely have a lot of variety in the game.

EG: Is this something that can be utilized at any point in the game, or only at pre-determined obstacles/narrative points?

RW: Both. There will be some mechanics that work right off the bat and you can use them throughout the entire game. Others you will discover at certain points and be able to use from that point on. And then there’s very specific mechanics that may only appear once.

EG: Liam appears very small against the game world and his own thoughts, is there any narrative significance to this design logic, and how does it factor into the gameplay?

RW: The narrative’s still developing but we definitely want to bring in themes like that. From a mechanical standpoint, we wanted the player to be able to see a lot in order to manipulate Liam’s thoughts in an open environment. The bigger the character is, the less you can see, so we deliberately designed for a small character.

EG: Were there any direct inspirations involved in the environment art process? The warm palette and pastoral setting of what has been previewed so far speaks a bit to Jonathan Blow’s Braid, but it sounds like that will only be one example of the types of environments we’ll encounter.

RW: We wanted the world to have a dream-like atmosphere. Our artist, Shannon Meissner, comes from a traditional background that inspired her to try hand-drawn watercolor, and we all agreed that it created the right “feel” for the game. It also helps Mental Drift stand out from what is typically a digitally painted medium. The first environment turned out great, and the plan going forward is for every environment to have a unique color palette that will change as the player progresses and digs deeper into the story.

EG: You define your intended genre at least partially as “discovery”. Could you explain what that means in terms of player and game aesthetics?

RW: Every time you turn a corner in Mental Drift, there’s something new to discover – new mechanics, new environments… an overall

new way to play. Players are not used to taking hold of a thought and moving it around, so right off the bat you’re discovering something. As you play, you’ll find different ways to use that basic mechanic to do more complex things. That feeling when you grab hold of something you’re not used to, when you discover new possibilities, is what we want to capture in Mental Drift.

EG: You are the first project announced as part of the Extra Credits Indie Fund publishing effort. How has the process been for you, up until this point? How was working with the Extra Credits team been from a development perspective?

RW: It’s been awesome. I knew James Portnow from DigiPen [Ed’s Note: DigiPen is a Washington-based computer science/engineering focused campus with a video game development emphasis], where I had taken his class, and I wanted his opinion on a new personal project. After he looked at it, he said, “You know, we’re doing this Indie Fund thing, and I want to put you guys in the running for it.” A while later, after reviewing lots of projects, he came back to me and said, “You’re the game.” It was a great feeling.

As far as development goes, James keeps an eye on things, but for the most part he lets us do what we want, which I think is really important for an indie game. He looks at new prototypes with us and he’s a great person to bounce ideas off of. Plus, the general presence Extra Credits has with the community and at conventions is all really helpful for us. We’re really happy to have them on board. Hopefully they’re happy to have us on board, as well.

EG: Lastly, the eternal question. When can gamers expect to play Mental Drift, and what platforms are you releasing on?

RW: We will release the game on PC, Mac, and Linux. We’ll release the game when it’s ready, but we want to keep the community informed as we go along. We’re going to be posting many updates and be very open about our progress. We’re also going to film the whole thing. We want to show people what it’s like to be part of the Extra Credits Indie Fund: the good things, the bad things, the things that we’re new at. We already started filming when we brought the game to PAX, so it’ll be good insight into the creation of an indie game. Right now we’ve got updates on Facebook and Twitter, and we’ll launch a blog soon where we can talk more about development.

More information on Mental Drift can be found at the game’s official website.