Back in the day when 3D gaming was making its way into the mainstream I couldn’t afford to purchase my own consoles, or even fathom having that amount of money at my disposal. Because of this, I missed out on the Sega Saturn and the noteworthy titles it offered like NiGHTS Into Dreams, Panzer Dragoon Saga, and many others I’m sure. I was excited when I learned that NiGHTS Into Dreams was getting a makeover because there’s a lot of love for it all over the Internet and the only experience I have with the game is the faint memory of briefly playing it at a demo station in Sears while my parents looked at dumb grown up stuff. 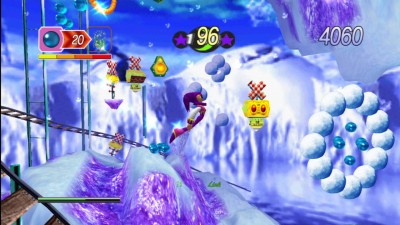 At first NiGHTS looks like a crude 3D platformer, but as soon as you direct your little nightmare having character to the flying guy in the jester hat the whole game changes. After you take control of Nights (the flying jester), the game takes a swerve and turns into a 2D side-scroller where you race against the clock to rack up as many points as possible by collecting orbs, going through rings, and doing tricks until the game gives you a grade that you don’t feel bad about.

The story of NiGHTS is almost nonexistent unless you really look for it. You can go through the entire game not knowing what is going on, and the only way to find out is to wait on the “press start” screen until a video starts. Even then it’s hard to tell exactly what’s happening, but from what I gathered you play as two kids, Claris and Elliot, who have just gone through minor childhood shortcomings (losing at basketball and blowing an audition) and are having nightmares because of it. They travel to a different land that is being ruled by Wizeman the Wicked… yes, that’s the antagonist’s name, and they have to stop him from taking over the real world with the help of Nights. In the end I think I liked it better when I had no idea why I was flying around. 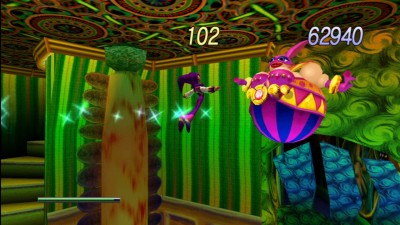 After reading through the tutorial and playing through the first couple levels of the game I was still a little stumped on what I was supposed to do to get higher than a D rank. You complete levels by collecting a certain number of orbs in a certain amount of time, so I would do that and finish the level. However, it took me a while to figure out that after you collect the orbs you go into “Bonus Time” and at that point you have to rack up as many points as possible to get your grade higher. The only problem is that the stages in each level are relatively short and go in a circle, so you are flying through the same hoops and collecting the same items over and over again. 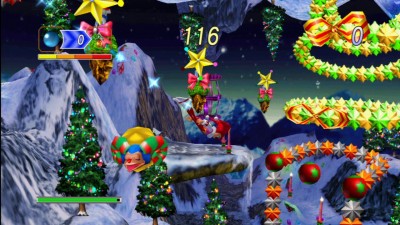 If you’re still playing NiGHTS during the holidays, you’re in luck!

At the end of every level you will fight a boss, and each boss is defeated in a different way. Like the levels, the bosses have to be beaten in a certain amount of time, and if you don’t defeat them you have to play the entire level again. Odds are you will be playing most levels at least twice because if you don’t figure out the boss the first time the game flat out tells you its weakness like it knows that you’ll never figure it out on your own.

NiGHTS comes with the HD remake, and the original Sega Saturn version. There is also a two level Christmas themed version. The remake looks great in HD, and it will blast your face off with color. However, after a while the overall design of the levels start to fade into the background making every one feel very similar. And since every stage is in the same level they end up intertwining, so sometimes the depth perception can get a little wonky and other times it’s difficult to tell exactly where you’re going next. The music makes up for it a little by being very upbeat and fanciful. For me, the soundtrack was one of the best parts of the game.

If you enjoyed NiGHTS Into Dreams on the Sega Saturn, then odds are you will enjoy this remake. However, if you have never played it and are just starting now, you might want to give it a try before you commit to it. The levels feel too similar and that doesn’t help when you’re already going around and around in a circle trying to get the most points on every stage. NiGHTS is also pretty short, so if you’re not interested in high scores and going back to play through the levels again and again you might want to skip it.