It’s really hard to talk about Ragnarok Odyssey without making allusions to other action RPG’s like Monster Hunter. I mean, Developer GungHo Online Entertainment’s newest game is basically the love child of Monster Hunter and Phantasy Star Online. With that being said, I won’t shy away from the relationship. Personally, I am a huge fan of the Monster Hunter series and, like a lot of Monster Hunter fans, am disenfranchised by the direction the series has taken. I feel like RO is targeted toward this group of people and I can say that ignoring these similarities is crazy. So the real question becomes, is this game a new addiction and will it be the system seller the Vita is waiting for?

At its surface Ragnarok Odyssey is a typical Japanese Action RPG. You’ll start up the game and be able to create a character from either a bunch of over the top male anime body parts ranging from stupid to unbelievably stupid, or from a set of female parts that have obviously had way more attention paid to them. The character creation is lacking, which is disappointing since that is usually one of my favorite parts of these types of games.  You’ll also pick your class here which will only matter for the first chapter of the game as you’ll be able to switch at will from there. 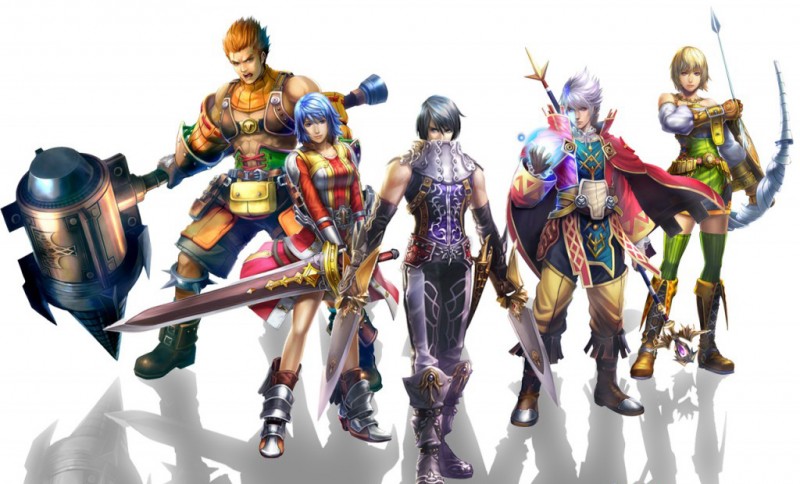 Most of the missions in RO are the same. You’ll navigate around a hub world with all your necessities available (item shop, weapons shop, ect.) and pick your quest from a familiar looking quest counter. These quests usually consist of finding and killing a specific number of monsters or gathering a certain amount of a specific item —which is exactly the same as the first type of quest considering almost all the items you need to find are held by monsters anyway.

Luckily, the combat in RO is fluid and engaging. Each weapon has its own set of both air and ground combos. The weapons include sword, hammer, dual blades, cleric staff, bow, and wand. Each of these weapons  perform significantly different and each offer special sets of combos that can trend off one another. For instance, with the dual blades I can run a combo that ends in a flurry of quick stabs or I can end by popping an enemy into the air, following him with a quick jump, and starting a whole new air combo to add some more damage away from the attacks of other ground based enemies. Likewise, many weapons have moves designed for handling the large groups which tend to crop up more often than you may like.

The game really picks up when you reach one of the many boss monsters. These creatures require some quick thinking and timing to destroy. It’s dangerous to go in and fight an agile wolf boss with a slow hammer or a plodding, heavy-hitting giant with something like dual blades. The variety here is where you’ll decide if RO is worth your time.

The leveling is handled differently as well, mostly in the way that there isn’t any leveling. Each class has its own set of base stats and those will not change except for a small boost after you complete each chapter. Not even specialized armor will increase those. Instead, you must equip cards dropped from defeated enemies in order to beef up your warrior. These cards are where you’ll find your defense up, attack up, and any other stat you would possibly want to increase.  Where armor does come into play is allowing you to add more slots to carry more cards. However, any armor set can be upgraded to carry a ton of cards. So really, you could get through the game by only using the beginner armor. The same can be slightly said for weapons which can be purchased or dropped randomly from monsters. The attack and stats on these vary, but every weapon can be upgrading using materials found in the field to increase damage output.

RO comes to the table with some great ideas. In fact, I’d say it brings some revolutionary ideas for the Vita system and its user interface. Three item shortcuts can be equipped to the bottom corner of the touch screen and make fast use a snap—it’s something so simple and something I pray other games will adopt. The colorful graphics look outstanding and the load times are almost nonexistent. I was happy to see the absence of rear touch or motion controls, as I’ve yet to be pleased with either. I’d go as far as to say that RO uses the Vita hardware better than any game that has come out on the system previous to this review. 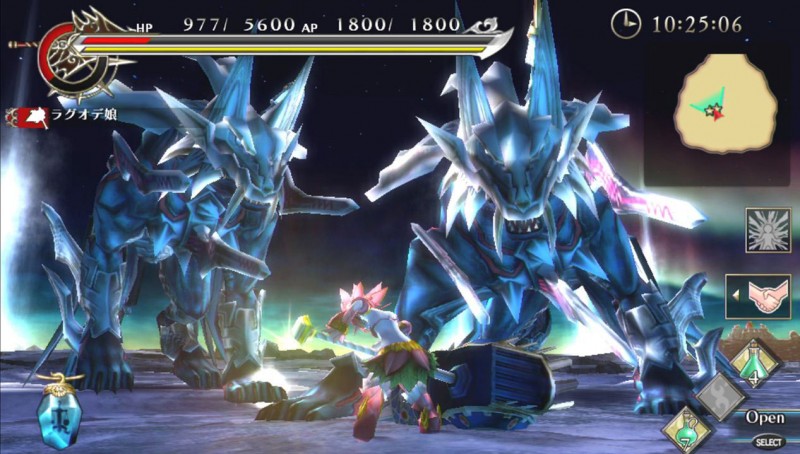 Bosses like these are why you want to have a friend.

So, is Ragnarok Odyssey the Vita’s killer app and an alternative to those of us who loved the Monster Hunter series? Sadly, no. While the game is quite good, it is lacking on some key issues, particularly motivation.

The main quests are boring and the bosses are really where the game shines. The problem is that even the huge bosses boil down to basically jamming the attack buttons as fast as you can and running before they slowly telegraph their next attack. While Monster Hunter prides itself on a skilled player’s ability to avoid any damage by smart playing, RO has instances where it is just plain impossible to avoid getting hurt. There’s no real “skill” involved outside of knowing the combos and how to run effectively.

Additionally, the armor system actually makes the game less playable. I never really found the need to go back and farm an enemy. Because there are so many weapons dropping with random attributes, you rarely need to go down one path. The game could have benefited from enemy specific weapons with attributes that could only be gained from fighting a specific boss. Instead, you end up so inundated with random weaponry that frustration sets in and you never really have an idea if you’re carrying the best weapon for any one job.

It makes me happy to say that the online works well here, as this is how the game should be played. There is no invite system, which is a drag, but that can be outmaneuvered by simply letting your friends know where you’re going to be. Online players can only choose up to the farthest quest they’ve reached, which is unfortunate in some instances, but the entirety of the game can be played online.

Ragnarok Odyssey is a game that has many wonderful things going for it. It is a long, well designed, and has intuitive combat and excellent multiplayer. It’s a shame that the overall experience is lessened by some key design decisions that cripple the experience by confusing the user and limiting the actual amount of play options. As someone who has been looking for a great action, armor-based RPG, I can recommend fans of the genre to pick this up for a well made distraction. Anyone else looking for just a good Vita game to buy might want to give it a try before diving into the world. Ragnarok Odyssey a good start, but not what we’ve been waiting for.