Far Cry 3 is helping 2012 go out with a bang. A huge open world set on an island chain. Big guns. Big explosions. A new level of technical visual fidelity. And based on the buzz prior to release, Far Cry 3 also cures leprosy and brings the dead back to life. What can go wrong with a game so seemingly perfect?

But fear not, Far Cry 3 isn’t a gloopy mess either. It is an absolute blast to play, but has its share of blunders, some of which are surprising for a game of its pedigree. Don’t worry, you needn’t cancel your pre-orders, but for those of you still on the edge about Far Cry 3, here are the highs and lows and everything else in between from Ubisoft’s latest title. It’s a big game, so here’s our big review.

Far Cry 3 puts you in the shoes of Jason Brody, on the fictional Rook Islands. While whooping it up with his fellow Santa Monica tourists, things go awry and they all get captured by pirates to be sold off into slavery. Brody escapes captivity and joins the local freedom fighters in a civil war against the pirates to free his friends from their fates worse than death. For a shooter, the story is fairly decent with several nods to Hollywood and other video games. 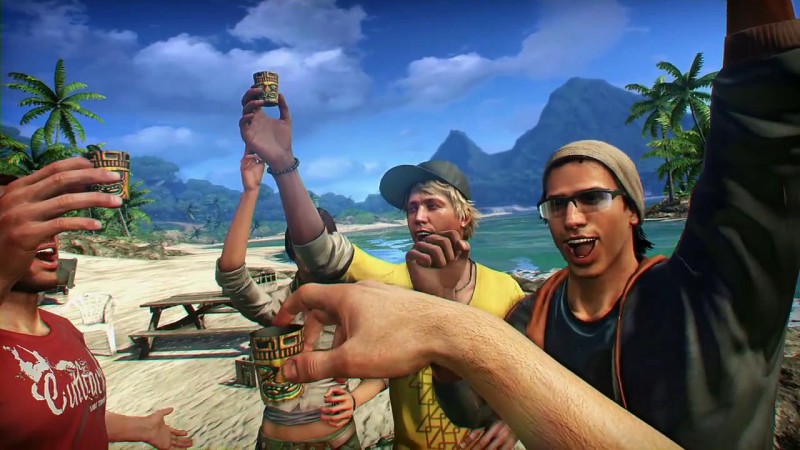 The single player campaign alone has enough meat on the bone to keep most gamers sated. The open world map is riddled with side missions, hidden collectibles to find, and of course, explorable real estate. Open world game fans who have had the itch for a first person shooter experience will spend days lost within the jungles. There is no one way to play Far Cry 3, either. If you love stealth, there is a nice system within the game, rewarding the player with extra experience for silently dispatching your foes. However, the game also rewards bombastic gameplay, doling out bonus XP for multi-kills and explosive kills. You can play the game with a full stealth loadout or walk into your enemies den with rocket launchers and flamethrowers, and Far Cry 3 will satisfy your bloodlust. Once the game is over, you can go back into the game and complete any side missions you may have missed, or simply explore the islands.

And it’s beautiful. It will make your graphics card sing sweet music to you in a language you didn’t know existed. From the vivid island color pallette, to the dazzling lighting and particle effects, to the character and gun models, to the high definition textures, everything about Far Cry 3 looks stunning. If you’re a graphics nut, and you all know who you are, this is the game for you.

The island itself is teeming with life, too. Animals and humans roam free together and they all interact with one another. Predators hunt prey both on ground and underwater, including humans, and the two sides of the civil war fight openly, whether you’re involved or not.

The voice acting is unparalleled, and like its visuals, raises the bar for the genre. Vaas, the mohawked pirate from the cover of the game and Sam the undercover German-American agent, particularly won us over, not simply by the delivery of their lines, but by the execution of their character. Of course, the highly-detailed, motion-captured facial models definitely helped sell their performance.

In terms of gameplay, Far Cry 3 stands on some sturdy legs. You explore the open world environment of the islands collecting guns, ammunition, and learning new and interesting ways to wipe out those who stand against you. Each kill and mission accomplished grants you experience points that can be spent to unlock perks from three different skill trees. New skills appear on your arm in the form of a new magical tattoo, giving the game a nice metaphysical twist.

Initially you can only carry one gun and a small amount of supplies. But by hunting various animals and collecting their skins with your machete, you can craft larger holsters, wallets, and bags, allowing you to carry more money, guns, ammunition, and medical supplies. It’s an interesting mechanic that gives you reason to explore some of the more remote portions of the islands.

Fallen enemies can be looted and treasure chests can be found, adding to your bank account. Cash can be spent on treasure maps, meds, ammunition, new guns, and what we loved, new gun customizations including silencers, scopes, and paint jobs.

If you’re looking for Skyrim with guns, go play Fallout: New Vegas. Aside from the open world environment, Skyrim and Far Cry 3 share very few similarities. If anything, Far Cry 3 feels more like an Assassin’s Creed game crossbred with the original Crysis with an added dash of Red Dead Redemption for good measure. Like its Ubisoft brother, you open up new large areas of the viewable map by scaling high towers and then–let’s call it–synchronizing the power flow to the radio tower. You can then find local enemy bases, and clear it of enemies, thereby forever liberating that section of the map from pirate control. Sound familiar? Because it should.

The more you accomplish in the game, the more guns unlock within the stores, giving you plenty of purpose for doing as many side missions as possible.

For PC gamers, you’ll be happy to note that Far Cry 3 has plenty of options to play with so you can optimize your performance. On our rigs, we found the game ran best with antialiasing at 4x or below, even when running the game on ultra.

Aside from the massive amounts of graphic violence and gore, Far Cry 3 also has some nudity, sex, and lots and lots of drug usage. This one is not for kids. 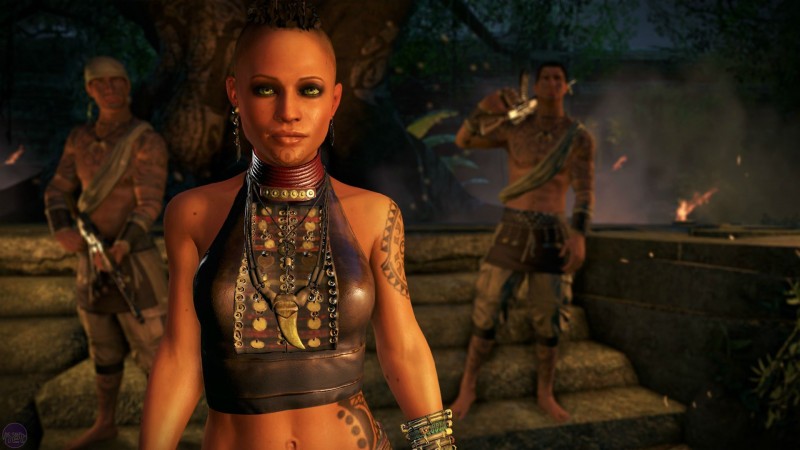 Far too much experience is handed out for far too little. By the end of the game, we had every skill unlocked, and there was still a huge slathering of side missions to complete.

The voice actor for Jason Brody, the protagonist, is terrible. He is miscast and his delivery falls completely flat compared to everyone around him, especially his enemies. He sounds like a squeaky teenager, instead of a seasoned warrior about to lead a bloody coup. Some may say that it sells his story as a fish out of water, but we’re not buying it. After murdering hundreds of people and leaving an equal number of animals in your wake, you’d think he’d guts up and quit complaining when he’s doing a fairly tame task like skinning another deer instead of saying things like “gross” and “disgusting.” We don’t expect a roid raging gun junkie to be the protagonist, but the scale between McLovin and Indiana Jones is tipped a bit far to the one side. On more than one occasion, his delivery pulled us from the experience. Never thought we’d say it, but we’re hoping someone whips up a nice silent protagonist mod.

At launch, the Far Cry servers used to compare stats with other players were very unstable, causing massive crashes and game stability issues. Playing the game offline worked as a temporary solution.

While looting fallen enemies, the game seems very excited about trying to swap your equipped weapon instead of searching the soldier at your feet. The primary option given to the player should be loot body and swapping weapons should be second. This gets particularly frustrating when you consistently drop your fully modded recurve bow for a generic AK-47 for the umpteenth time.

Far Cry 3 has the worst inventory and menu system for any AAA game that we’ve seen. Navigation is a nightmare when buying, selling, or trying to craft new items. Having one menu for everything including inventory, crafting, journal, game options, and skillsets is never a great idea, even on console titles. On PC, everything is done through the escape button. Out of habit, you’ll find yourself hitting the I key for your inventory, the K key for your skills, and the J key for your journal to no effect. Stores desperately need a “sell all” and “sell all junk” option (including skins that are no longer usable), especially since you’ll be collecting plenty of random odds and ends to barter with like playing cards, photos of dwarves, discarded doll heads and other valuable items. As a side note: most of the stores in Far Cry 3 are automated vending machines and it made us giggle thinking of someone jamming broken toys, animal skins, and crumpled porno mags into a coke machine and walking away with a .50 caliber sniper.

And as a few notes of mixed contention, the hunting system is great for crafting carryable expansions, but once you get all the expansions, there is little reason to actively skin for profit. It’s made too aggravating by the terrible store and inventory system.

And finally, we really wish Far Cry 3 had some destructible environments. Some small aerial vehicles aside from the hang glider would have given the game some legs, too. And speaking of exploration, Far Cry 3 is begging for a small submersible for underwater exploration. 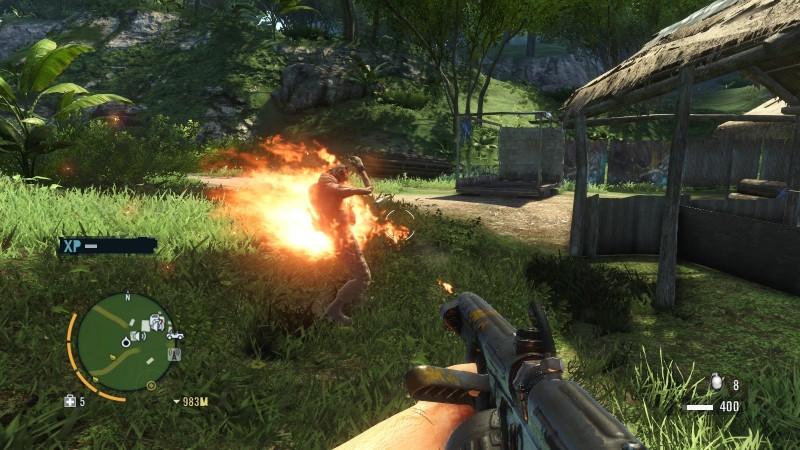 The multiplayer in Far Cry 3 is split into competitive and cooperative modes. Both are fairly standard fare with only a few original mechanics. While playing either you’ll earn experience points, and as you level up you’ll unlock more and more weapons and abilities along with bonus packages that house randomized rewards. Strangely, you’ll have to decode these packages which require you to stay in game for a set amount of time, anywhere between 10 minutes and several hours. We can’t help but wonder what good this delay does, as its seems like a completely pointless requirement.

The competitive mode ranges from four different game variations on Team Deathmatch, Capture the Flag and Search and Destroy. It’s very well rounded and more than a little reminiscent of Call of Duty. It even has killstreak abilities. Like in the single player all the guns feel great and there’s a good bit of fun and variety to be found in the level design. We had a surprisingly good time with the multiplayer, and it certainly doesn’t feel tacked on for the sake of checking boxes.

Sadly the same cannot be said for the cooperative campaign. Aside from an inexcusable amount of bugs and server issues, it simply felt bland and uninteresting. It seems very much inspired by Left 4 Dead, only with pirates instead of zombies. You simply walk from outpost to outpost killing hordes of identical pirates along with one or two armored heavies. At points the game will ask you to protect a generator or blow up a bridge, but it all amounts to the same gameplay: shoot the pirates. There are also a few vehicle sections where you get to compete against your coop buddies in friendly races and demolition derbies. Like the rest of the coop campaign, the vehicle gameplay felt underdeveloped.

Far Cry 3 includes a nifty little level creator that you can use to sculpt multiplayer worlds of all shapes and sizes. In it you’ll get access to pretty much all the models and textures the game has to offer along with easy tools to manipulate the terrain. It’s a nice addition that’s sure to spawn some really great and really strange user made maps.

Despite its venial sins, we really do love Far Cry 3, just know that it’s not as perfect as the pre-launch buzz may make you feel. The graphics are unrivaled. The gun and stealth play inside the lush open environment is ridiculously satisfying. The super long length of the single player campaign and the sweet level creator will keep Far Cry 3 relevant for years. But we can’t help but be irked by the abysmal menu system and the non-hardcore hardcore mode. It’s safe to load up your flamethrower and sniper rifle, but just be sure to watch out for those crocodiles.