Earlier this past week, the Obama Administration issued a break in the freeze on Congressional research into the effects of violent video games on children, suggesting $10 million be authorized to the Centers for Disease Control for that purpose. Part of his push for significant action on the country’s gun control policy, President Obama explained the call for research, “We don’t benefit from ignorance. We don’t benefit from not knowing the science.” The move is the most public example of the 14th of Obama’s 23 executive orders issued in addition to the legislation and signed this past Thursday, that puts into effect “a presidential memorandum directing the Centers for Disease Control to research the causes and prevention of gun violence.”

Typified by a controversial editorial from Gamasutra editor in chief Kris Graft, those against the summit claimed the issue already resolved, citing the Supreme Court’s 2011 decision in favor of the Entertainment Merchant’s Association, and the consumer rights inherent in the First Amendment. Other portions of the industry supported the meeting, the Independent Game Developers Association sent an open letter to VP Biden declaring a willingness to work with the Administration, while alleging a lack of scientific correlation between gaming and behavior. 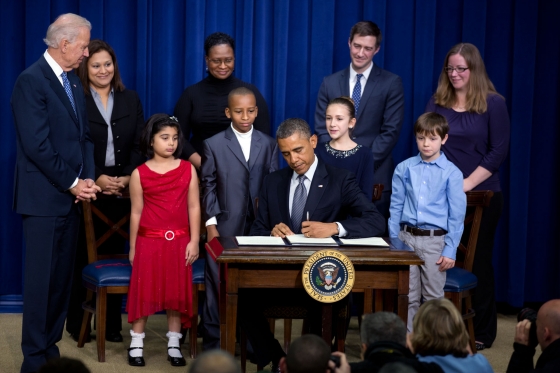 Such insistence was reportedly the crux of the industry’s argument to Biden, characterized by Ferguson as being “…a defensive posture. They wanted to emphasize [the Supreme Court ruling] over and over.” Following the meeting, the Entertainment Software Association released a statement (via Joystiq) praising the actions taken by the White House, and also insisting on a lack of scientific consensus in regards to video game violence.

Gaming’s place in the debate on gun violence began again after comments from the head of the National Rifle Association, Wayne LaPierre, in the wake of the school shooting in Newtown, Connecticut. LaPierre referenced violent media as a whole, but isolated the games industry as “…a callous, corrupt and corrupting shadow industry that sells and sows violence against its own people.” The characterization of the industry was emblematic in several pieces of legislation put forth in both National and State Congress. H.R. 287,  headed by Rep. Jim Matheson (D – Utah), would make the ESRB ratings become legally binding, while Rep. Diane Franklin (R – Missouri) introduced a flat, “sin” tax on Mature-rated games in H.R. 157. At the time of publishing, neither has passed.