Do you hear that grinding sound? That horrible screeching in your head from needing to play the same level over and over again just to progress every so slightly in game? That’s the sound of Primal Fears, a budget priced top down twin stick shooter inspired by Left 4 Dead and any number of games by Sigma Team (makers of the Alien Shooter and Zombie Shooter series).

In Primal Fears, you play the role of generic male, or hell, if you feel like it, you can play as generic female out to shoot bug people in a post-apocalyptic world. Primal Fears manages to accomplish what might be a video game first in that it has plenty of backstory, but absolutely no story in the present tense. Who the male and female characters are, where they are going, and why they are out shooting mutated humans instead of camping out in safety is completely unknown. But plenty of exposition can be found by reading discarded newspapers on the ground. 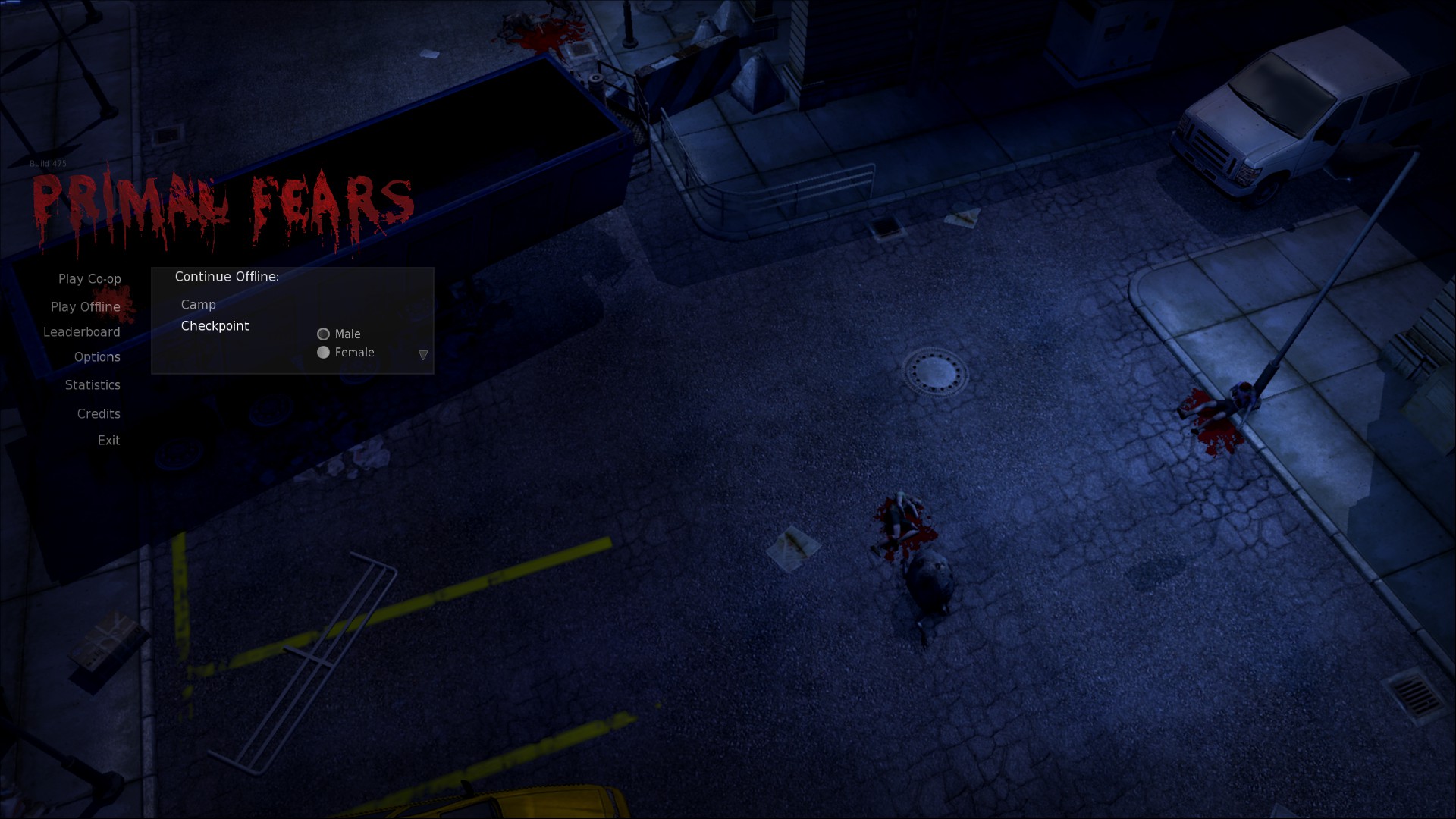 But most people who will pick up Primal Fears aren’t in it for the story. They’re in it for the shooting. And we’re sorry to say that it is bland, bland, bland. You start the game off with a simple assault rifle. Once you save up enough cash by slaying baddies or collecting loot in hidden stashes, you can upgrade your equipment or purchase new weapons altogether like flamethrowers, shotguns, taser rifles, nail guns, sawblade launchers, and more. While the variety of weapons has the potential of changing up the gameplay, the ammunition supply is disgustingly small because most enemies are bullet sponges, and you never get to play with one gun long enough to have any real fun with it. Most enemy encounters boil down to shoot enemy to draw its attention, backstep and shoot enemy until dead, reload, repeat.

Each successive kill grants you points and point multipliers. At the end of each stage, your score is tallied. If you managed to gather enough points, you can unlock another stage. This is a frustrating mechanic because clearing stage 1 doesn’t automatically open stage 2 and so on. We were short by 50 points to unlock the third stage forcing us to replay the entire length of an earlier level just to progress in the game. While midway through a stage, you can’t save your points and exit back to the main hub making the entire experience frustrating and boring.

The enemy AI is rock stupid as all enemies simply run right to your feet and swat away. It’s like they’re out to steal your sneakers instead of eating your flesh. Enemy spawn points are also ridiculously frustrating as teams of enemies will often come flooding out of areas you’ve already cleared. 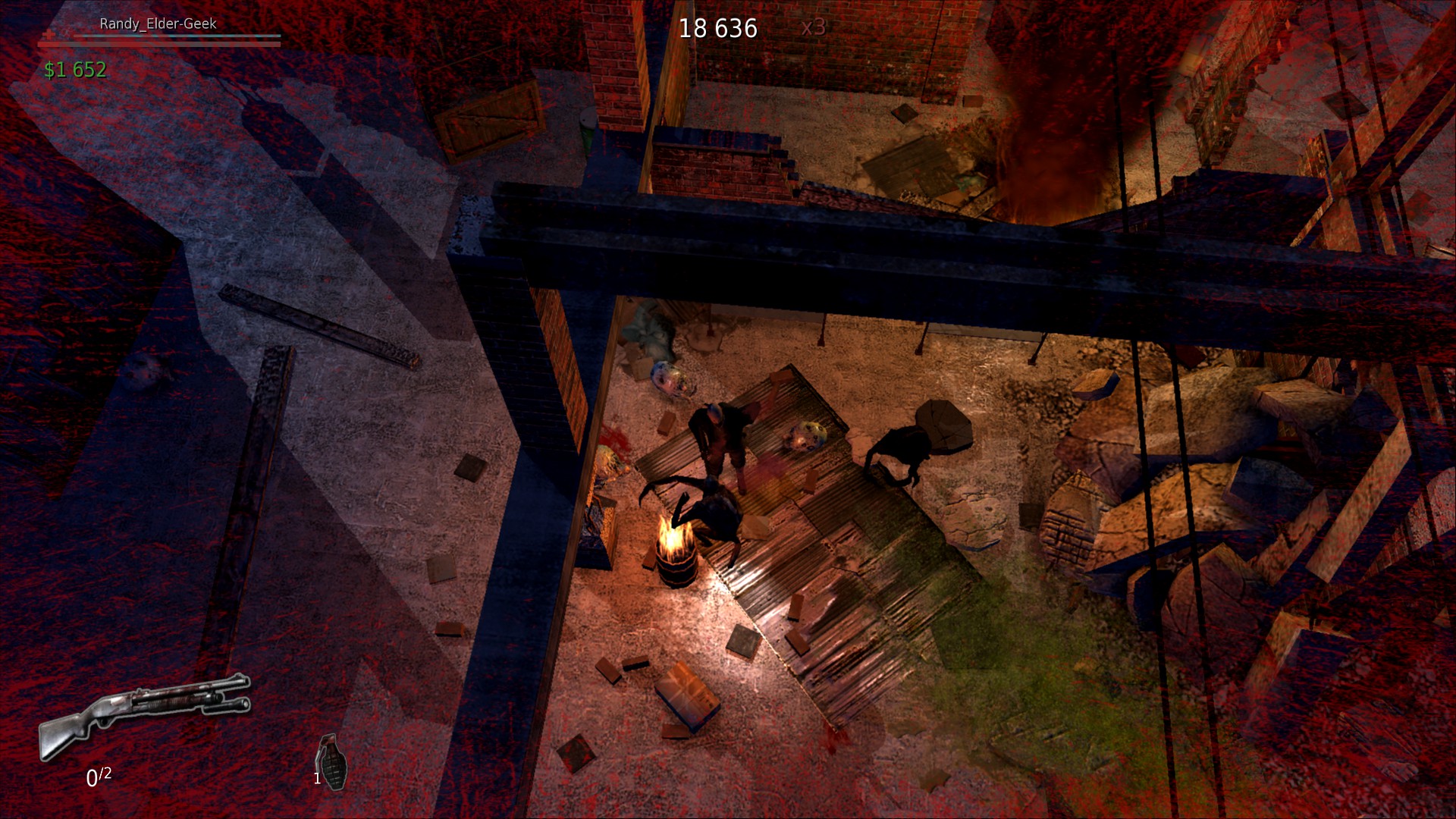 Visually, the game is OK and at times, it can be a bit spooky. While the flashlight from your weapon looks like it’s just for show, it serves some practical purposes, helping you spot some of the slower moving enemies that might be lurking close by. The enemy variety is sadly uninspired and most of the monster models look like they’ve been pulled out of other horror games like Resident Evil’s licker, Dead Space’s tick babies, and Left 4 Dead’s boomers.

The sound design is another low point for the game. The music is boring and loops far too often. The enemy moans and whistles don’t reflect the level of horror the game is aspiring for. And the reload sound for most guns sounds more like a someone flicking a light switch.

There is nothing mechanically wrong with the game aside from occasional clipping issues as enemies walk through obstacles and doorways. It’s a playable game and won’t crash much. But simply being “playable” and having a zombie-like setting aren’t enough to qualify as a “good” game. We would have loved to test out the game cooperatively, but didn’t find anyone else with the game to join us. Considering the number of times we had to replay the early levels in the game, we’re in no rush to go back and try again.

Primal Fears is average at best, and painfully frustrating at worst. It borrows a little too heavily from more successful games around it giving the false impression that it might be a worthwhile venture. But for your hard earned $10, you can find much better twin stick shooters.