The space shooter genre that was alive and well from the 1990s has been missing almost entirely from this generation’s line-up of games. Despite gamers cries for more Wing Commander and X-Wing titles, it has been harder and harder to scratch that space shooter itch. 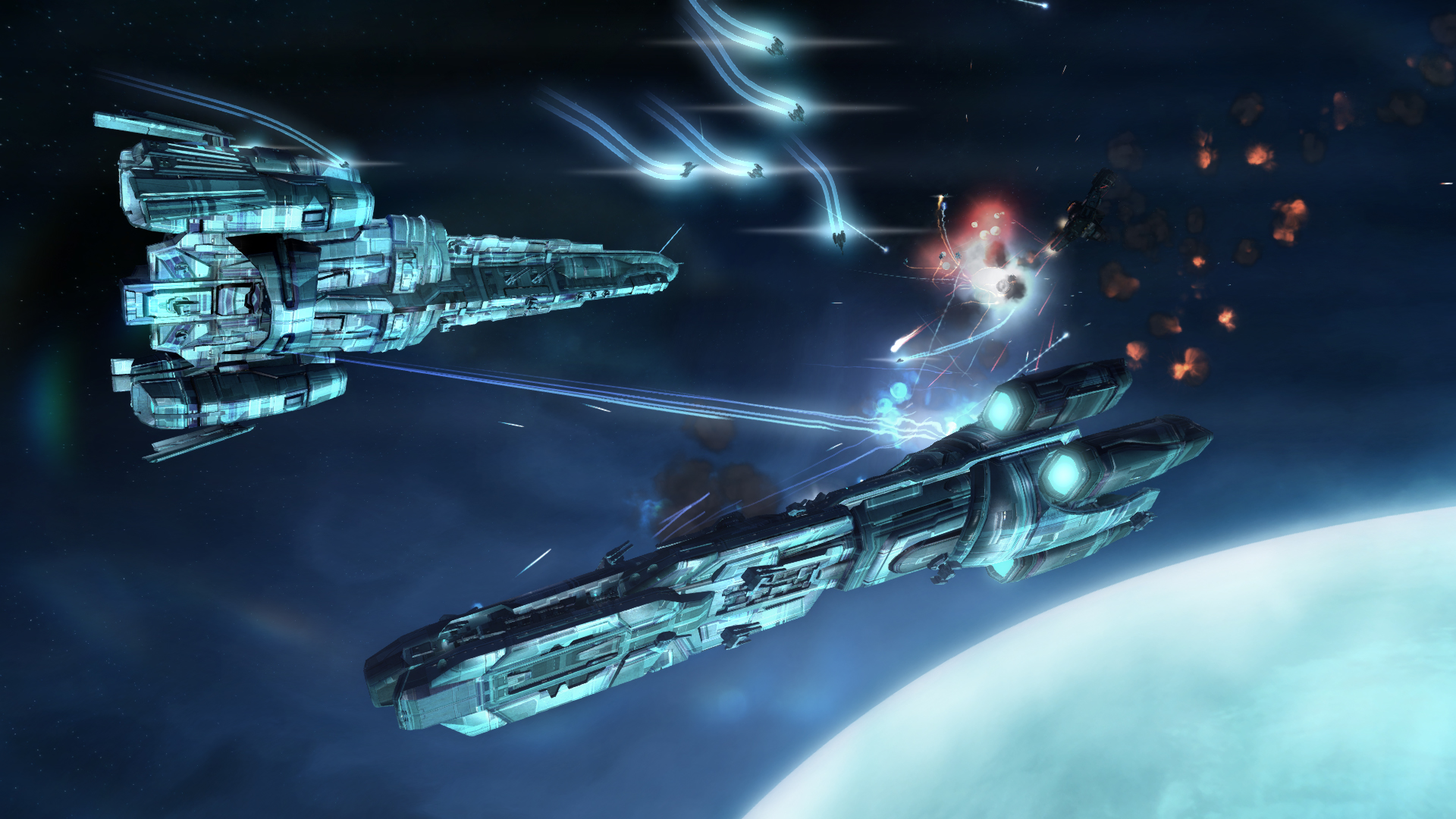 Available on PC, and soon on Mac and Linux , Strike Suit Zero successfully melds stylings of the Ace Combat series with the X-Wing and Wing Commander series, but also adds a nice Battlestar Galactica and of course, Gundam Wing flair to it as well. If you’re a fan of any of the aforementioned video games, movies, or television shows or even their subgenres, then we urge you to try Strike Suit Zero.

Set in the distant future, humanity has mastered interstellar space travel and space combat. As humans are colonized over dozens of planets, some have grown tired of the oppressive rule of Earth and they desire independence. As an alien technology is discovered on a newly colonized world, humanity becomes inflamed in a civil war spanning across galaxies.

You play as a star fighter pilot for the Earth as you undergo the game’s 13 missions. Each mission requires you to pliot one of the four different types of craft available to the player: the interceptor, the fighter, the bomber, and of course, the creme de le creme, the prototype Strike Suit. Once you clear the mission, you can replay it again to try and unlock some of the ships’ upgrades, or best your previous scores.

The gameplay in Strike Suit is massive, fantastic, addictive, challenging, rewarding, and probably a dozen other adjectives we’d love to slip in here. The scope of the playable space is like nothing we’ve ever seen in a space shooter before. And the amount of action going on around the player at almost any given time is unspeakably amazing. The galactic civil war comes to life around you and you play a small, but pivotal role. You will feel dwarfed by the space stations as you strafe their surface and dodge their defensive tower fire. You will become overwhelmed by the swarms of enemy fighters that move and hunt in squadrons. You will feel relieved as you narrowly dodge the beam cannons being fired from one massive cruiser to another.

Playing Strike Suit takes a small learning curve, but once you get the feel for the ships, you’ll be controlling them like you were born in them. Most ships fly similarly to Ace Combat craft, but of course, all concern for gravity and what is “right side up” is thrown completely out the airlock. The Strike Suit itself controls half the time like a standard fighter, and the other half of the time like a weekend-ruining war machine angel of death with massive forward firing cannons, and the ability to lock onto multiple targets at once and unleashing a hellstorm of destructive missiles. 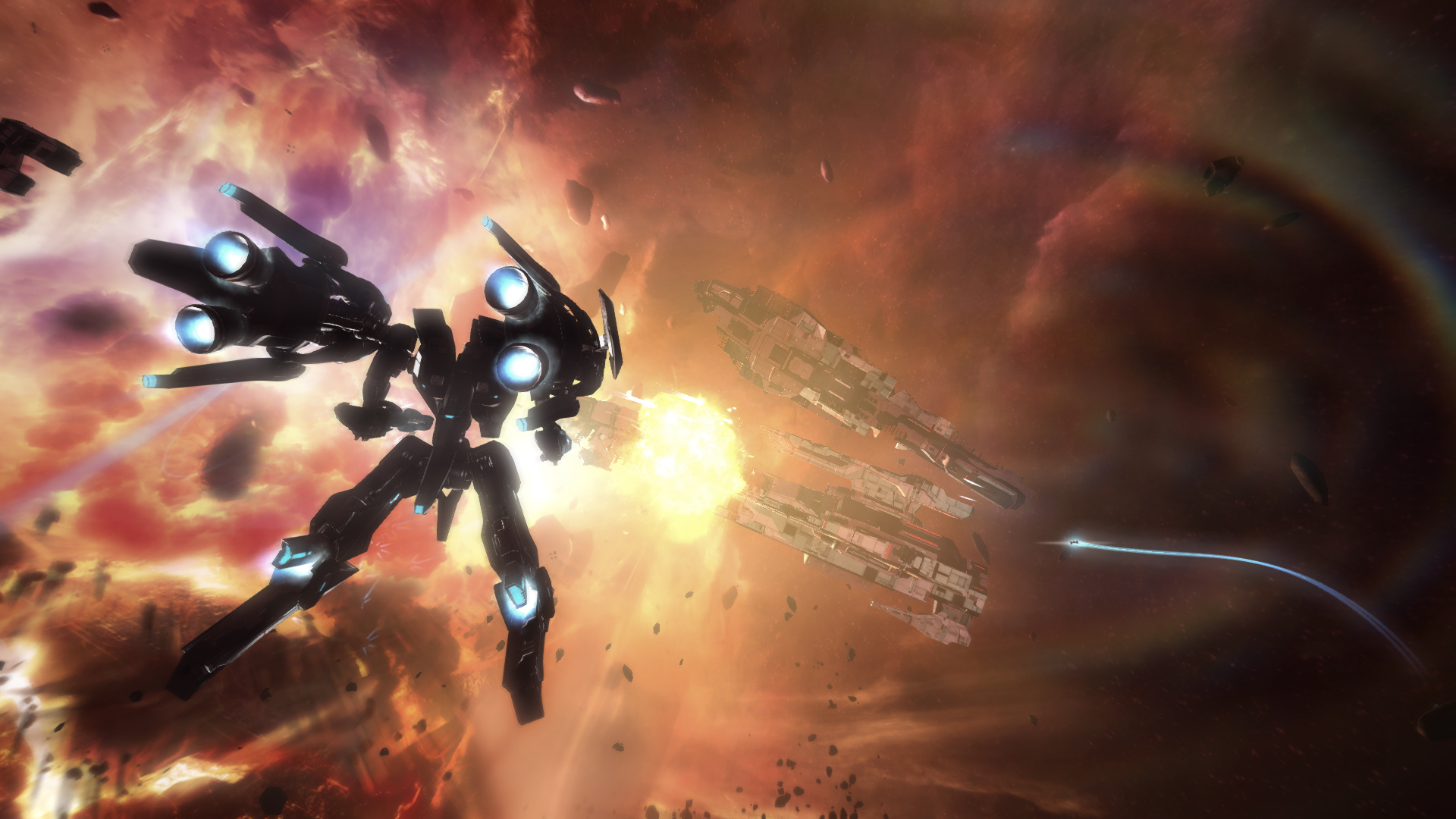 Visually, Strike Suit Zero is absolutely gorgeous. The space backgrounds will take a moment of your time as you mentally suck them in. And the starcraft themselves, from the small fighters, to the large carriers, to the giant stations, all feel organically obtainable, but appropriately science fictiony as well.

The soundtrack by Paul Ruskay who is noted for his work with Homeworld, has a Battlestar Galactica undertone to it. It is fantastic and only adds to the immersion of the entire experience.

We only have two problems with Strike Suit Zero. First, there is no way to have your camera turn around to see if someone is on your tail. This would prove immensely useful especially during the massive space battles. And secondly, we really wish there was a cockpit overlay when in first person mode, or at the very least, an option to turn one on. It would add to the immersion a little bit.

But that’s it. We adore Strike Suit Zero, and for it’s bargain price, it’s a game that no science fiction fan should pass up. As a fair warning, Strike Suit Zero is a brutally hard experience. Each victory will feel earned. So if you’re up for the challenge, then give Strike Suit Zero a go. But the game is so large, we would give anything to be able to play it cooperatively with a squadron of friends. Here’s hoping for a sequel.