The cave is good. There. If that’s all you came for then feel free to switch over to steam and start your playthrough. But that’s not why you watch our videos or visit our website. You come to get something more, and that’s what The Cave gives you. It’s not just a good adventure game drowned in beauty, it’s a story. It’s a tale that’s lived inside its creator, Ron Gilbert, for years. The result is a winding convergence of interactivity, storytelling, and sheer dark whimsy that reminds some of us why we’re here in the first place. Story.

The Cave follows 7 adventurers on their journey to find what matters to them most, but the main character is the talking, sarcastic cave itself–which is more the lion headed Cave of Wonders than the black and dangerous Mines of Moria. Throughout your journey The Cave will offer up commentary and quips regarding your adventure. In the long run, he will be the source of most dialogue as well as set up the dark tales that are about to unfold.  And when we say dark, we mean dark. 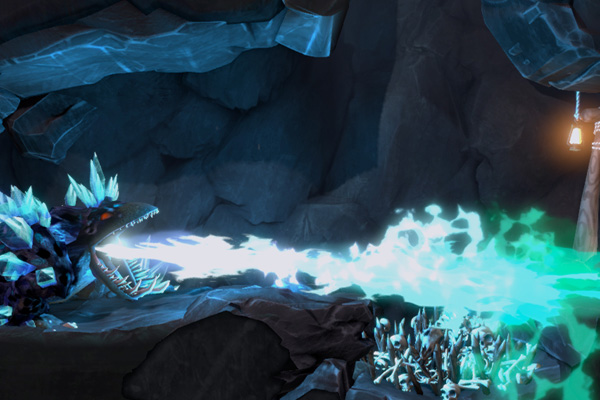 The crux of your journey will be discovering the morbid and oftentimes twisted paths that each of your adventurers have already walked. These story sequences are told through cleverly designed puzzles in which the cave takes the guise of your character’s sinuous past and forces you to solve puzzles that ultimately lead to some pretty despicable acts. The morality quandary of The Cave starts here, more testing you as the player than any of the characters. At times we had actual emotional conflict when forced into acts of revenge, deceit, and patricide.

These story arcs are the most intriguing portions of the game and the biggest reason to play through The Cave. While the humor is spot on, the voice work is fantastic, and the game looks beautiful–it’s reenacting each of the seven adventurer’s lives that makes you ache to go spelunking again and again.

The main gameplay of The Cave is where it both shines and fails. You’ll enter with three characters and start your journey exploring specific areas centered around the characters you picked. For instance, if you choose the Knight, you’ll end up in a distressed kingdom, and if you pick the monk you’ll end up in a high monastery. You’ll find yourself running into plenty atypical adventure game situations, but rather than letting you reach catastrophic levels of item hoarding, the Cave instead allows each of your three characters to hold on to exactly one item. This amplifies and streamlines the adventure game experience, extracting much of the guesswork and inventory management in exchange for a more puzzle centric alternative. Think Lost Vikings with way more murder, deceit, and stalactites. 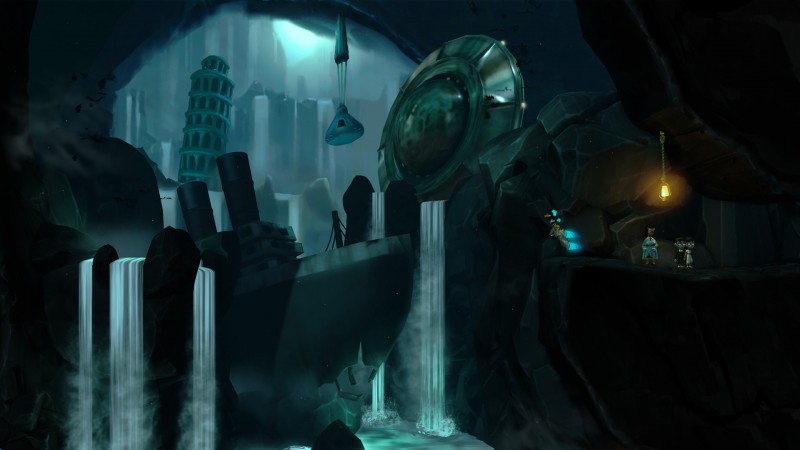 As much as we loved traversing the brooding ambiance of The Cave, it’s not without its considerable flaws.  Due to the “one character, one item” mechanic you’ll find yourself constantly backtracking across the large, complex set pieces to grab that one item you left behind, and your character will never move fast enough. That coupled with their tendency to die at the slightest fall leads to some extremely frustrating moments. Not to mention that every adventure comes canned with 4 mandatory story beats that you have to repeat every time you enter the cave. To experience all the characters unique stories, you must play the game multiple times and having over half the game be content you’ve already explored can lead to needless frustration and, worse, boredom.

The oddest choice from Double Fine is to only give us 7 characters. In a game that has to be played multiple times with parties of 3, why not just round the number of characters to 9 so that we can have 3 semi-unique experiences? Instead, when you’re ready to see that last character’s story, you need to bring along 2 other characters whose story you’ve already seen. It makes your last playthrough an insufferable chore and leaves you with a bad taste in your mouth.

Despite our complaints, The Cave still stands as an exploration of the mind through a medium that offers more advantages than any other. It reeks of Double Fine charm and will satisfy anyone looking for that good adventure vibe on PS3, Wii U, XBox 360, and PC. The puzzles require a good bit of critical thinking, but never so much that you’ll find yourself frustrated. Unfortunately, this pristine experience is marred by excessive backtracking, maddening repetition on multiple playthroughs, and an overall dismissal of what the player has to endure to reap the benefit of all the game’s charm.

The Cave is a unique experience that deserves to be played. It’s full of memorable stories, emotion, and intriguing situations. It’s a shame it’s tainted by some poor design choices, but even those can be overcome by taking it slow. We give the cave a worth trying.