Gamers have a love-hate relationship with the Crysis series, and with good reason. The series is eternally conflicted about its self identity, or lack thereof. PC gamers crave the original open map style of Crysis and Crysis: Warhead, but there’s no denying the sales numbers that Crysis 2 kicked up when the game attempted to reach a larger audience on consoles. Not wanting to anger their bread and butter and benchmark enthusiast PC market, Crytek has tried to swing the pendulum back a bit in the direction of the original. But it is enough to win back the hearts of some lost fans?

And of course, the first question on everyone’s mind is: can my rig run it?

The game ran fairly smoothly on our test PC with everything maxed out except antialiasing, steadily hold a framerate anywhere between 45 to 60 frames per second at 1080p, with an occasional hiccup at the end of load screens. There’s no denying it. Crysis 3 is the most beautiful game on the market. From the constant explosions both in the foreground and background, the amazing lighting and water effects, to the super sweet high definition textures. But the game does have some odd quirks, like capping your frames at 30 when v-sync is enabled. Do yourself a favor, turn off v-sync immediately.

But being the best looking game isn’t enough to win us over. A game needs to have substance, and sadly, Crysis has little. In fact, the campaign will rack you in anywhere from five to six hours, maybe a little more depending on if you complete all the optional side missions. The game was fun enough that we wanted a few more levels, but not enough for us to want to immediately replay it.

The main story teams up long lost super suit squadmates Psycho and Prophet as they attempt to destroy the mega-corporation C.E.L.L. and the Ceph aliens within the ruins of New York City. This time around, Psycho is stripped of his body gear, while Prophet’s has been jazzercised into what the game refers to as the greatest military machine of all time, surpassing all other nanosuits. With the exception of the ability to customize in-game perks for the nanosuit, like extending cloak length and increased reload speed, the suit hasn’t seen much of an upgrade on the player’s side. 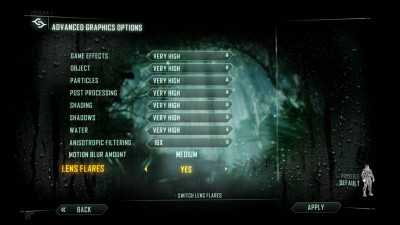 But the story itself is an improvement over Crysis 2, giving some much needed oppression for the heroes to triumphantly overcome. But the speed in which the story is told damages the overall package. We didn’t care about a single character in the entire game, except for Psycho, and that was more due to his presence in the original Crysis and Crysis: Warhead. If the game took its time and told its story properly, it would be a win-win situation. The game wouldn’t be so sardonically short and we might give a care or two about who we are rescuing in the side missions.

The game controls like a streamlined version of Crysis 2. All the same guns are back with nearly all the same attachments. We loved the delicious dichotomy of the high tech super suit with the low tech and ultra deadly bow and arrow, giving the game a bit of Rambo flair. But players will be happy to hear that the maps are a little more like the original. A little. Most objective points are far off in the distance, and the game doesn’t hold your hand to point out the direction you need to go to get there. The playfield is generally rather wide allowing you to explore the environment and pick your own path as you slaughter your enemies that stand in your way. It is definitely an improvement over many of the recent claustrophobia-inducing corridor shooters that have been hitting the market lately.

The multiplayer will extend the life of your time within Crysis 3, revisiting the perks and rewards system and blending it with your suits powers fairly well. The new Hunter mode is definitely worth giving an eyeball as two nanosuited warriors take on a team of C.E.L.L. troopers. But as fine as the multiplayer is in Crysis 3, it’s not hot enough to pull players from their standard addictions of Battlefield or Call of Duty. For most, it’ll be a temporary distraction and therefore, we can’t truly recommend picking the game if you’re solely interested in the multiplayer.

Crysis 3 is the best looking in the series. The campaign is laughably short. The multiplayer is noteworthy, but its longevity within the gaming community is questionable. If you loved Crysis 2 and want a more refined experience, no matter its length, than Crysis 3 is for you. If you were hoping for a revival of the first and wanting a mega-rewarding single player campaign, you might want to hold off until that hefty $60 pricetag comes down about half way before you think about hitting those purchase and download buttons.