Beautiful graphics, stunning set pieces, highly customization weapons, decent acting, a well rounded soundtrack,and a lengthy and admittedly fun cooperative campaign: Dead Space 3 seems to have it all. But the game is the anomaly that is somehow less than the sum of its parts. The reason: it sold its soul.

If you hold the original Dead Space and Dead Space 3 side by side, you’d realize how drastically different they are from one another, despite being set in the same universe with the same protagonist and even being released within the same console generation. The original was all about isolation, loneliness, fear, mystery, and getting out alive. Character development was handled gently through a haunted psyche and creepy audio logs. Weapons were of the kludge variety, slapped together from futuristic mining and engineering equipment. And ammunition was scarce. It was a devilish and horrifying act of subtlety.

Dead Space 3 is the exact opposite. As a cooperative experience, you never feel alone. Even if you play the campaign as a single-player experience, this time around, the main character, Isaac, is joined up with an entire crew that he engages on a personal basis regularly. Isaac speaks even more than he did in Dead Space 2, something we’re incredibly sad to report.

Subtlety is thrown entirely out the airlock. Instead of handling one deadly foe with precision, you now have to manage crowd control as you pour co 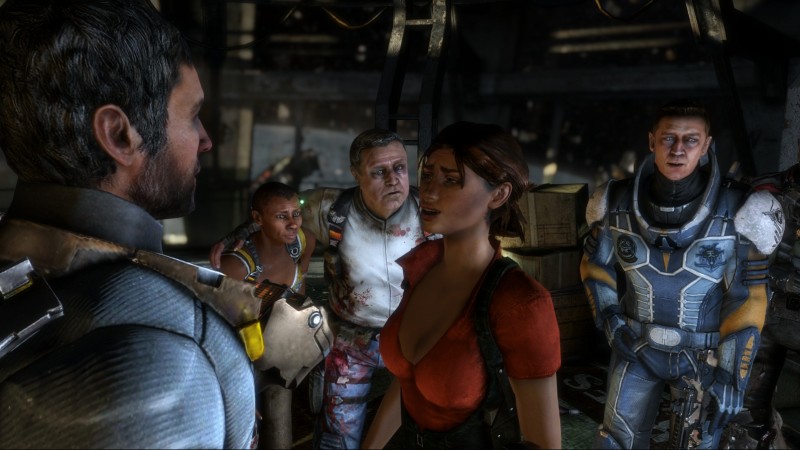 Oh good! You brought the whole gang. And here I thought this was going to be scary.

untless rounds into the waves of necromorphs that have come to eat your face. Weapons and ammunition are in a healthy supply. Now the guns are super guns, as you essentially glue one beastly gun on top of another gun of your choice.

There is nothing scary about Dead Space 3, except for the shameful amount of cosmetic DLC that was launched on day 1, and therefore, cannot be described as survival horror. Instead, this is more action/sci-fi. There are no jump scares. There are no psychological scares. There is no fear of running out of ammunition. Dead Space 3 is a far cry from the original, and purists who want more of the haunting atmosphere, story, and pace of the original will be disappointed. Severely. To properly wrap your head around 3, think Gears of War, but with a Lost Planet paint job.

But that doesn’t mean Dead Space 3 is a bad game. Admittedly, we had a very good time playing through the campaign. As we mentioned earlier, the graphics are quite beautiful. We tested DS3 on our PCs and none of us had a hard time running the game on maximum settings, and thankfully, the game has some nice PC customization options. It works equally well with a mouse and keyboard configuration or with a controller. The only truly negative performance issue we have to bring up about the PC version of Dead Space 3 is that while playing cooperatively, your microphone is always open and there is no way of muting it within game or by setting up a push to talk means of communication.

The story isn’t terrible either, but it is definitely not DS3’s strong suit. This time around Isaac is employed by what remains of Earth’s military to stop humanity from being destroyed by the necromorphs, and worse, religious nutjobs. Along the way he bumps into his X-girlfriend, her current boyfriend, and therein lies the personal conflict of the game.

The campaign of Dead Space 3 is surprisingly long. And as a cooperative experience, it’s worth the asking price if you’re looking for another game to slay hundreds of undead outer space baddies with a buddy.

You traverse through a multitude of gorgeously designed settings dispatching foes of both the human and the necromorph variety. The rules of the original still apply here. Necromorphs are vulnerable by having their limbs removed. By stomping your enemies’ remains and by scavenging through boxes and shelves, you can amass materials to craft and upgrade your own guns or upgrade your space suit.

Crafting guns is one of the games fine points. If you have the materials, you can essentially put any two weapons together into one uber gun. Assault rifle with a shotgun underbarrel? Of course. Want a cutter with a flame thrower? You can do that. Sonic blaster with a lightsaber-like melee attachment. Yup.

To help with the nearly endless ways of customizing your weapons and managing your inventory, Dead Space 3 has dropped type-specific ammunition and replaced it all with “ammunition.” What works for your cutter, works for your flamethrower or rocket launcher. Certainly, it cuts down on item swapping at the workbenches, but it feels pretty generic. 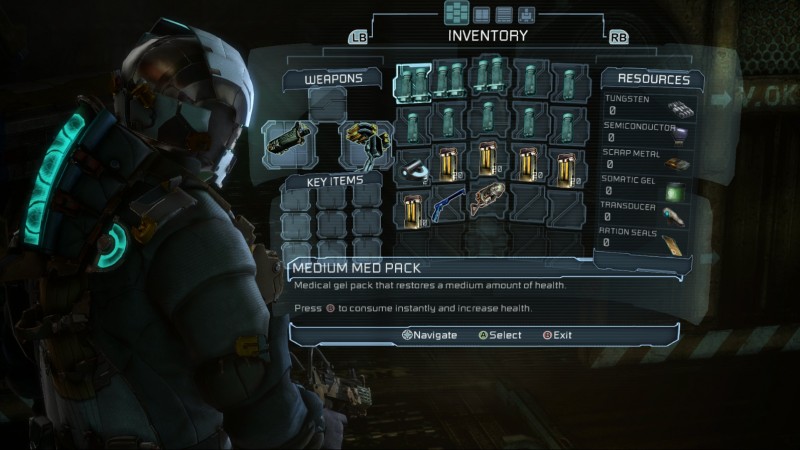 Still the best HUD in gaming.

The game also features a fair amount of easily trackable side missions to help fatten your wallet and expand your extensive arsenal or to beef up your suit.

Dead Space 3 also contains some rather thrilling set pieces and action sequences that surprised us. The zero gravity segments were far and away our favorite. And the repelling / wall running mechanic worked well too, but was definitely overused by the end.

There are very few boss encounters within Dead Space 3, and the ones that are present, are comically easy. Your bigger thrills will definitely come from the unexpected hordes of mobs.

In the end, Dead Space 3 is very well polished average game. It doesn’t do anything particularly wrong (aside from selling its soul) but it doesn’t do enough daring or new to be anything special. Mechanically, it is rock solid, sporting some great customization options, a rewarding cooperative campaign, and of course, one of the coolest HUDs ever in gaming. But the horror is absolutely weak and the story could go back to draft 1.

It is Michelangelo painting the Sistine Chapel with a roller. Sure, it might look better than if you or I were to paint it, but it lacks the subtlety to make it memorable or beautiful. Horror and survival horror fans will probably be disappointed, even if playing in “survival mode,” but shooter and action fans will enjoy it. Because of that massive dividing line, we can only rate it a Worth Trying because it may not be anything like what you expect it to be. If this was the first time we were to see a Dead Space game, we would easily grant it a Worth Buying, but it simply doesn’t live up to the excellence that was set by the original. The tonal change might not be a downgrade, but it’s certainly a misguided evolution. If you’re new to the series, we suggest you start with the original and work your way up from there.

Here’s hoping if we ever see another Dead Space, that Visceral Games will retire Isaac Clark, slow down the Michael Bay action, and relearn the gentle dance of fear.