Learning absolutely nothing from their 2011 cult hit Dead Island, Techland and Deep Silver give the entire gaming community a blueprint on how to not create a sequel in the 2013 gaming market. This one should have been easy for them to make. After two years of reviews and customer feedback, Techland ignored all signs that were available to make an even better game.

But before we get into the fun of reviewing bad games, for newcomers, here is what to expect from Dead Island: Riptide.

Taking place immediately after the events of Dead Island, players select a character from a group of survivors immune to the zombie virus and are set forth in an open world to slay baddies and find a way to freedom from the island they’re stranded upon. Throughout the environment, weapons can be found both of intentional and makeshift varieties. They can be repaired back to their original luster or upgraded with electrical, poisonous, or fiery enhancements. 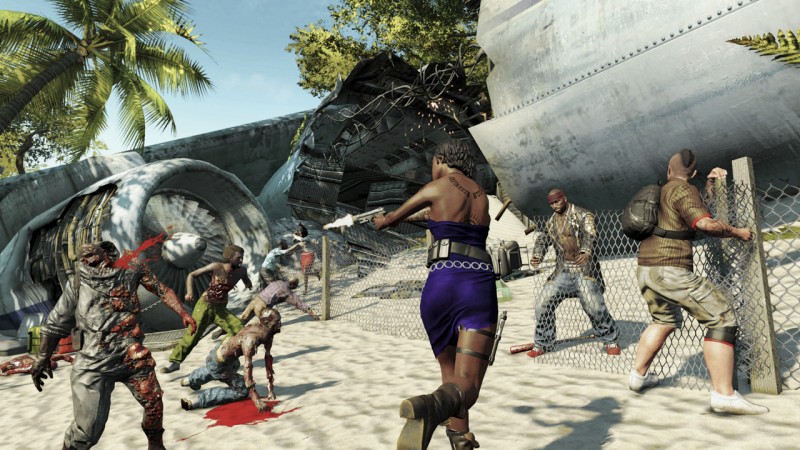 The original dead island was an enjoyable game in spite of its flaws…which were many. But now two years have gone by and it’s clear techland hasn’t been paying any attention.

After 13 hours of gameplay and leaving hundreds of undead headless in our wake, the only improvement we found that Riptide made was in the quality of the environments. Now there are beautiful waterfalls to gaze upon, murky swamps to wade through, and small caves to spelunk.

But the rest of the game is either a lateral step, or a giant step backwards.

To start, Dead Island: Riptide is remarkably easier than its predecessor. Money for upgrades is found in fist fulls. New weapons of all varieties are more abundant, giving you little incentive to either repair or upgrade what you found previously. And the zombies are even dumber. Most of them just stand there…. staring at you. You practically have to douse yourself in old bay to get them to shamble over and take a bite.

They are even easier to kill too. We could throw practically anything in our recently found arsenal at them and they’d fall to pieces as though they were held together by spit, gum, and scotch tape. We managed to complete most of the game without upgrading our weapons or tapping into our explosive ordnance. The only time we upgraded weapons was to see some new effects while killing zombies. We only used grenades and molotov cocktails out of boredom.

Speaking of molotov cocktails: their effects have been dumbed down… greatly. The beautiful charring effect that existed in the original Dead Island when a zombie caught fire has been removed. That’s only if they happen to catch fire in the first place. Throwing a fire bottle into a group of zombies that are busy eating can sometimes have absolutely no effect on them whatsoever.

The overpowered head stomp move is still in place (something we can overlook), but that combined with the overabundance of super effective weapons and the addition of a new insta-kill super move (where you jump off a higher platform than zombies and give them the ole’ flying kabaz), makes Dead Island: Riptide entirely too easy. And when a game gets too easy… it gets boring.

The mission structure is roughly the same as Dead Island. You’re given a task (mostly to find items), and return to the quest giver for experience and loot. Between the main quest, the side quests, and the recurring side quests, there is plenty to do. However, no matter how good you are at quest management, you’ll find yourself constantly trekking from one side of the map to the other through the same swamp, through the same forest, down the same roads, over and over… and over again. Did we mention that it gets boring?

Just for the sake of rounding out this review, the story is standard fare for a zombie game and the voice acting is of the same caliber as the original. Nothing else to see here. Move along.

A few bugs can be overlooked if a game is fun enough. Gameplay will always rule over graphics! But the only cure for a boring game, is to play something else entirely. We can say with all sincerity, this was the most boring game we’ve played and reviewed this year. It pains us, but the original is better in almost every conceivable way. We can never get back the 13 hours of game time we put into playing and completing Riptide or the time spent writing this review and editing together this video. The most we can do is help prevent another soul from wasting their hard earned money and time. Save your $40.