In what most gamers thought to be an April Fool’s Day prank from Ubisoft, Far Cry 3: Blood Dragon turned out to be true. Coated from head to toe with a faux-80s treatment, Blood Dragon is a love letter to gamers and geeks who grew up in the neon-loving, hair-feathering, Reaganomic, new wave, radical 80’s.

Blood Dragon is a standalone DLC. Meaning: you don’t need to own Far Cry 3 to play Blood Dragon. You don’t even need to understand what Far Cry 3 is about. In fact, if you disliked Far Cry 3, there’s a good chance you may love Blood Dragon. They’re two completely different entities, but of course, Blood Dragon borrows most of its mechanics and a ton of Far Cry 3’s assets.

Like Far Cry 3, Blood Dragon is an open world first person shooter set on a fictitious island. You’re given objectives to take over, and it’s up to you to decide how you’d like to approach your targets from the open map. Pocked across the island are multiple enemy bases, all of which can be brought under your control… through force. By conquering enemy territory, side missions are unlocked that grant access to special attachments to the guns in your arsenal. Once a territory is liberated, it is permanently freed of enemy activity for the rest of the game. 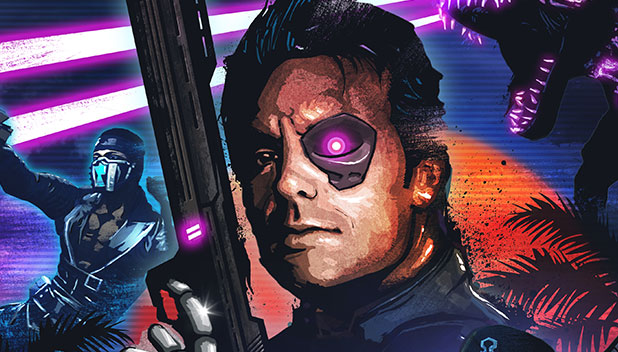 Health does not regenerate, but there is plenty of it. The same can be said for your ammunition. Do yourself a favor, and increase the difficulty right from the start to get the most reward out of conquering enemy bases. Like the core game, Blood Dragon is a bit too easy on the standard setting.

Of course, you have to worry about the game’s blood dragons, large dinosaur-like creatures that shoot lasers from their eyes. If you’ve got the stones, you can attempt to take them down with your weapons, but often the wiser route is to lure them away by throwing the cyborg hearts of your fallen enemies as bait.

You play as Sergeant Rex “Power” Colt, a cybernetic super soldier with an insatiable bloodlust in a fictitious 2007 nuclear wasteland. Physically, Colt looks like Kyle Reese mixed with the Terminator, which is a match made in heaven because he’s voiced by 1980s action star Michael Biehn. His personality is closer to that of Duke Nukem, however, and his jokes are often self-deprecating to the genres he’s hyperbolizing. His delivery is perfect and might be the best we’ll see all year. His lines left us laughing out loud more than once.

As a cyborg, you no longer run out of breath while running or swimming, and you no longer take fall damage, making you a true cybernetic super soldier. 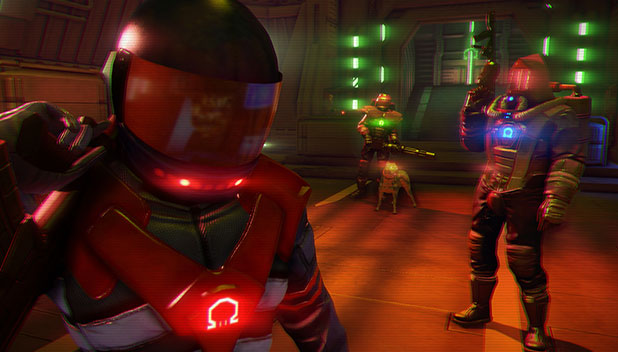 We reviewed Blood Dragon on the Xbox 360, which looked OK, great, even, considering the hardware. But since we reviewed Far Cry 3 on the PC, it felt like a giant step back. There’s some pop in at fairly close range, and there is a noticeable lack of detail in some of the terrain and underwater environments.

We’re anxious to play through the game again once it releases for PC. The game is definitely good enough to warrant multiple playthroughs. Visually, we had issues with getting used to playing in a dark pink environment. It got hard on the eyes, especially when playing at night. Other than that all the animals remained in the playable island, but with a new metallic coating, which felt slightly lazy compared to the treatment given to the rest of the game. The animals could have been replaced entirely with something more creative like robotic drones out to seek and destroy humans. But simply retexturing them feels like an easy solution to a more complex problem.

In hindsight, we feel Blood Dragon is a stronger game than Far Cry 3 as it addresses most of the issues we had with core game.

The wonky inventory system of Far Cry 3 has seen the axe, and everything has been streamlined into credits the instant you pick up loot. The whiny, wimpy main character has been replaced with the hardcore and hilarious Rex Colt. The weapon system has been streamlined into fewer (but way cooler) guns, so you no longer accidentally swap weapons when you loot bodies, you only pick up ammo. The tattoo system, which gave players the illusion of choice in leveling, has been replaced with a more classic leveling system, with perks automatically unlocking as you level up. 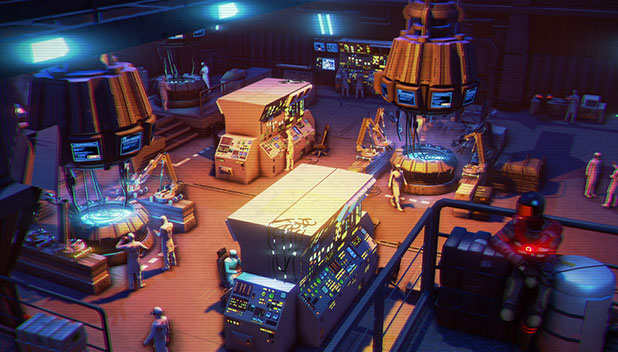 When you complete the game, you are given the freedom to go back into the map to pick up any hidden collectibles you may have missed, or to take over any remaining enemy territories.

Blood Dragon piles together as many 1980s action, science fiction, and pop culture references as it possibly can and holds it all together in the guise of a shooter. We found references to The Terminator series, The Karate Kid series, Star Wars, Star Trek TNG, Escape from New York, Teenage Mutant Ninja Turtles, Transformers, Max Headroom, Michael Jackson’s Moonwalker, Berzerk the video game, G.I. Joe, Stan Bush, and a ton more. Blood Dragon oozes personality. From the training montage, to the perfect soundtrack with 80s power chords and electric drums, to the flair in which Colt reloads his weapons, to the one-liners he accidentally repeats in front of his teammates, to the smartalec loading screens, Blood Dragon is unlike anything we’ve seen since the glory days of Duke Nukem. It’s one of the most potent doses of 1980s action sci fi you can get in video game form. You might actually contract boneitis.

Unfortunately, there is no cooperative campaign with Blood Dragon, which feels like an absolute tragedy. The 1980s arcade market was ripe with cooperative goodies that were eager to steal your quarters. It’s a shame Blood Dragon didn’t make that as part of their homage.

Blood Dragon is a great shooter, despite some noticeable but forgivable visual flaws on the 360 version that we tested. It is brimming with personality and feels like a breath of fresh air compared to most of the cookie cutter military shooters that we’ve been seeing over the past few years. Shooter fans old and new, children of the 80s, and anyone who has a hankering for some stealthy, open world, neon bow and arrow action should give Blood Dragon a try.