Summer is here… well, the heat at least. Usually that means a drought in gaming while we wait for the heavy hitters to release in the fall, but this year there are a decent amount of notable titles coming out in the summer. However, I’m going to use these hot few months to stay inside with my consoles, PC and air conditioning, and catch up on my backlog. This means another thrilling summer of voting on what games I play and seeing what I have to say about them. I’m excited, and you should be too. 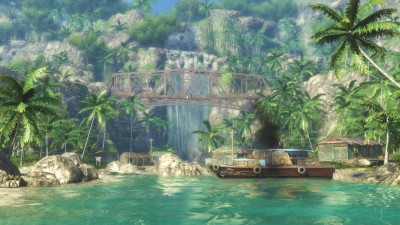 Looks nice and peaceful to me.

Let’s kick off the summer right with a game that puts you on a nice tropical island for a fun filled vacation full of beaches, parasailing, and drugged up pirates who kidnap you and your friends. Far Cry 3 it is! After the lackluster (in my opinion) Far Cry 2, Far Cry 3 goes back to its tropical roots, plants you on a fictional island and lets you do pretty much whatever you want, all in first person. You can explore, stealthily commandeer pirate bases, hunt animals, or just go guns blazing and burn everything in sight with a flame thrower.

I’ll be honest, I became horribly disinterested when the game started and I saw a bunch of college frat boys taking shots on the beach. You’ll see a couple stereotypes there including the preppy Wall Street banker, and the burnout stoner. I became even more disinterested when I learned that you play as Jason Brody, the one that complains the most, instead of his obviously superior, military trained brother.  Even though I’m playing as the person I hated in high school and saving even more of them, I pushed on. I’m glad I did because that frat boy turns into a tribal warrior killing machine after he joins up with the Rakyat, a group of natives turned freedom fighters trying to take back their island from Vaas and his pirate gang. 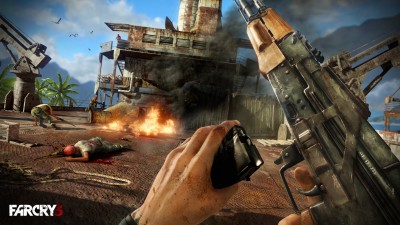 I just learned how to shoot yesterday!

Thankfully it doesn’t take Jason long to become an expert with guns, bows, knives, explosives and stealth techniques, because he will need all of them to save his friends and overthrow the pirates almost singlehandedly.  Throughout the game you will have access to more and more guns that you can either buy from the store, or get for free once you have explored certain parts of the island.

Pro tip: Save your money for the special weapons. Most of the standard ones are unlocked when you climb the various radio towers around the island and restore communications to open up more of the map. This sounds eerily familiar to another Ubisoft game that may or may not involve climbing to the tops of buildings only to jump off of them and land unscathed in a haystack.

The stealth aspect is also very entertaining. There is nothing more entertaining than running around a pirate compound secretly taking them out one by one while listening to the panicked cried of the pirates while you’re hiding in the bushes planning your next kill.

That came off a little more morbid than planned…

That being said, I also hardly ever felt like I was in any real danger throughout the game. Shark bites and komodo dragon attacks left Jason relatively unscathed, and bullets didn’t seem to do much damage either. There was one point where I had some trouble taking down armored enemies, but one of the upgrades took care of that problem. Also, once I got the special sniper rifle I barely had to confront enemies head on at all. 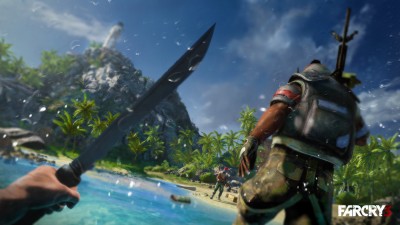 During your escapades you will gain experience which you will spend on skills such as better accuracy with your guns, or different types of stealth takedowns. The best part is that each upgrade comes with a section of a tribal arm tattoo that inevitably gets larger as the game progresses. I really enjoyed the upgrade system because even though the game doles out experience very generously, you will still be crippled in later parts of the game unless you explore, find animals to hunt, and use their skins to fashion various holsters and bags for your guns, explosives, and other loot. You’re going to want to get some of those upgraded bags early, because there was many a time near the beginning where I had to forego extra loot or money because my wallet was full and Jason wouldn’t put the extra in his socks no matter which buttons I pushed.

Far Cry 3 is a very good looking game. Odds are you won’t get tired of exploring  until you are well into the second island, and that’s just because we’re so used to 6-8 hour first person shooters. Our minds, or at least mine, have trouble staying attentive through a 20+ hour first person shooter. However, I still had fun just tearing across the island in my stolen jeep when I didn’t feel like navigating through the awful menu system to the map for fast travel. The only downside is that those run down jeeps and cars make similar squeaks and creaks as my truck… that can’t be good.

Disclaimer: Don’t let these guys bite you in real life.

While the voice acting for most of the protagonists is good (except for complainy Jason), the voice acting and overall personalities of the bad guys gave me the chills. One minor bad guy who had one of Jason’s friends had a pretty uncomfortable scene, but Vaas really takes the cake when it comes to crazy. Every time he showed up in a scene, mostly unexpectedly, I had a very uneasy feeling that I usually don’t get when I play a videogame. I felt like he was going to climb out of the screen and stab me in the neck.

Far Cry 3 is an entertaining game that will last you a while, especially if you are a completionist. In the end I’m glad I kept with it even though I wasn’t a fan of the main character. Both shooting and stealth feel rewarding, if a little easy, and the upgrade process makes you noticeably more powerful to the point where you can alter the way you play because suddenly you can sneak up on someone, pull the pin off of a grenade on his belt, and kick him into a group of other guys. Despite its shortcomings, I would recommend this game especially now that the price has dropped. You will definitely get enough bang for your buck, and then some.

Voting has ended and the winner is The Witcher: Enhanced Edition.