The story of Last Light picks up after Metro 2033, and gamers once again take control of Artyom as he travels around the nuclear wasteland of Moscow in this single-player shooter. This time around, Artyom is investigating the possibility of a surviving Dark One after he seemingly destroyed the species at the end of the original.

Metro: Last Light takes players on an incredibly immersive adventure through the tunnels and causeways below the city and through a few open areas above the surface as well. Players can carry three different customizable weapons of their choice of shotguns, sniper rifles, air rifles, pistols, and assault rifles, both of the pre-war mass manufactured and post war kludge varieties and face off against humans and mutants alike.

Last Light plays similarly to a Half-Life 2-type experience. Action sequences are broken down into linear levels with occasional visits to more populated human settlements to restock on ammunition, mod some guns, take a few shots of vodka, and absorb the culture. The story starts strong, but unfortunately, the pace and direction seem to go awry in the final quarter of the game.

When faced with confrontation, players can stick to the shadows and dispatch their enemies with stealth takedowns and throwing knives, or they can go in guns blazing and throwing pipe bombs. Occasionally, there are a few morality choices tossed in like saving the lives of hostages, but they’re never sticky sweet or overtly pointed out to the player. For the most part, they simply exist somewhere on your path, and whether or not the player decides to take part in them adds to the immersion. 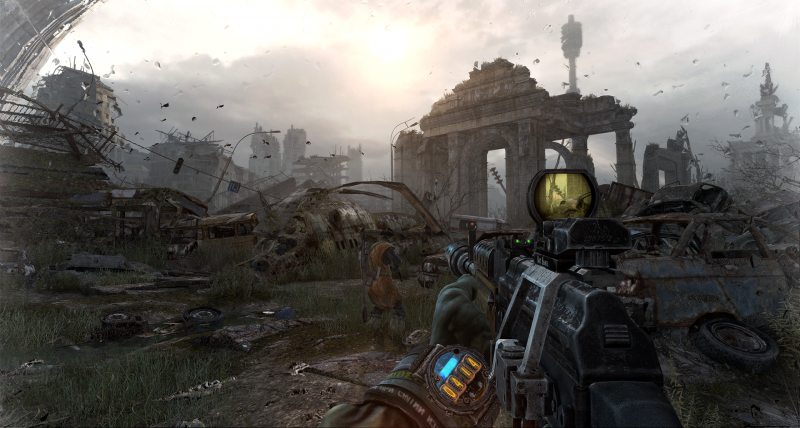 The stealth in the game has seen some tweaking from the original. Metro 2033’s stealth was tricky, forcing players to watch their every step for broken glass and other small objects found in the environment. In Last Light, the AI has been dumbed down quite a bit, and all you need to do to stay hidden is stand in some shadows. There is still some broken glass in some places you need to worry about, the but the human AI is so dumb and their reaction times are so slow, you can stealth kill them from the front, sides, and back well after t they’ve heard you coming. The easy stealth’ing has a domino effect. Stealth kills conserve so much ammo that by the end of the game, we hadn’t spent almost 1,000 rounds of our ammunition currency, and never used a single health pack.

But it’s nice that the stealth option is there. If you’re good enough, you can downright avoid some fights.

While the graphics are obviously a high point of the game, it is important to highlight the environment and the immersion of Metro: Last Light. Last Light has some of the most beautiful and believable environments seen in gaming. Each setting feels original and even though we were going down several tunnels, none of it felt like a copy and paste project. Unlike many games, the environment dictates what type of foes you’ll be encountering, and it all feels organic. Areas with open air overhead will have some demons flying around. Swamps will bring about shrimp and a few other water-based baddies. Abandoned tunnels and more cramped areas overtaken by horrific spiders while the more open spaces will typically be crawling with nosalis. And along the train tracks and more heavily traveled areas, you need to worry about looters, rapists, and ne’er-do-wells. The world of Metro: Last Light feels incredibly well thought out and alive.

There are some moments of what may be called “horror” on paper from a technical point of view, but we can’t say that Last Light ever scared us. There are a few moments of some minor jumps scares, but the dark and macabre tone of the game was more sad than scary. And we don’t mean that pejoratively. We felt genuinely empathetic to the deceased in Moscow, and we can’t really say that about many first person shooters.

We played through Last Light on PC where the customization options are pretty lackluster, leaving out some industry standard tweaks from the video options menu which is surprising considering the developer. Performance-wise, we saw around 45 frames per second average with some peaks around 90 in some tighter spaces and some very short dips slightly below 30 in large open areas with a lot going on. So, for the most part, we felt like it ran very smoothly even without the ability to personally fudge with some of the options.

Glitch-wise, we got physically stuck in a few places causing us to reload a previous savepoint. We had a boss freeze in a permanent state of undeath along with some smaller baddies that seemingly danced around it… all of which became invincible. And there is just something so unnerving about flags flapping in the wind… while indoors. But truth be told, we found most of these abnormalities to be funny and they didn’t happen enough to detract much from the game.

It took us 9 hours to complete the game on Normal. We aren’t going to rate the game with Ranger mode difficulty because it is sold as a separate DLC. Playing the original Metro on Ranger Mode was the definitive way to play. It is foolish that the DLC costs an additional $5 to those who haven’t pre-ordered the game.

Metro: Last Light is certainly an enjoyable experience. While not as original as its predecessor, there’s still a lot the game does right. The environment and atmosphere is perfect and we’ve never seen rain done better in a video game. It expands the physical location of dystopian Moscow and makes the world of Metro more believable and lived in. Like a good sequel, it seems to amplify the experience of the original and vice versa. There are a lot of nice touches with the animal AI, as well. Most animals are only aggressive when taunted or if you get too close instead of being pulled almost magnetically to the player.

We have absolutely no issue with nudity or sex, but the sex in Metro: Last Light felt completely out of place and a bit sophomoric compared to the rest of the game’s heavier themes. The game’s largest issue is in its difficulty: it’s too easy on the standard setting and the stealth is over simplified. Making matters worse, Ranger Mode, the game’s harder difficulty and the most immersive way to play the game, is sold as day one DLC to anyone who didn’t pre-order the game.

If you were a huge fan of Metro 2033, we can say it’s worth buying. But in all likelihood, you probably already have the game installed and completed by now. For everyone else you can wait for Last Light to go on sale, which might make the Ranger Mode DLC not sting so much, or try the original at a severely discounted price.