Thanks to the latest Humble Indie Bundle, I have a slew of new games on my backlog. Your votes are in and Hotline Miami was the big winner.

There aren’t many ways you can make a setting like Miami in the 1980’s appealing to gamers short of making the next Grand Theft Auto: Vice City. While there is no carjacking in Hotline Miami, there is certainly plenty of killing. In fact, that’s pretty much all there is. 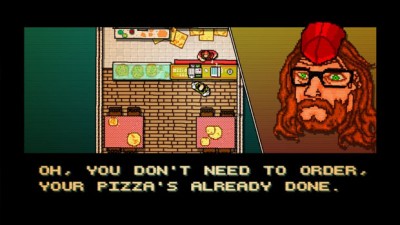 This kind of thing happens after every level… it’s strange.

In this top down beat-em-up style game, you are tasked with going from level to level killing enemies by any means necessary. This means wildly punching, stabbing, slashing and shooting your way through homes and office buildings, and watching your back for ambushes at the same time. The catch? There’s no health meter. One hit and you’re dead. This inevitably leads to repeating the same levels over and over again, but after awhile it didn’t seem worth it.

You play as an unnamed character who receives phone messages asking him in roundabout ways to go to a specific location and kill everyone inside. I can’t really tell if he’s a hit man, a psychopath, or both, but it is apparent by hallucinations and other odd happenings that he is stupid wasted on drugs. The story is a little difficult to follow because of the unreliable narrator, but it gets pretty interesting, especially when you see it through someone else’s perspective. 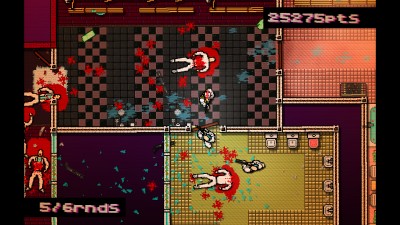 Sure is bloody in here

Every level in Hotline Miami is pretty similar. You start outside a building, walk in, kill the first guy, take his weapon, and assess the situation if another guy just out of your line of sight doesn’t blow you away with a shotgun. There are usually a number of different weapons lying about, so it is up to you whether you want to go melee, or guns blazing. Gunshots will attract enemies, but at a certain point I preferred that because there were too many times where I would try to sneak up behind an enemy and he would turn around with absolutely no warning and shoot me dead. I ended up going through most levels hiding behind a doorway and blowing enemies away one by one, Thermopylae style.

A game like Hotline Miami is difficult to balance. The first comparison that pops into my head is Super Meat Boy. It has the same kind of tough-as-nails playstyle that will have you frustrated to no end, but always wanting to come back for more punishment.

This comparison was in my head for a little while, at least. After a few respawns I realized that the game randomizes the level every time you die, so it is very difficult to fine tune a strategy. When you do finally conquer the level it feels more like luck than anything else. This throws a wrench into the whole system because if you’re expecting an enemy to have a silenced pistol and suddenly he has a loud rifle it completely throws off your run. If Super Meat Boy randomized the levels every time you restarted I think people would be much more frustrated with it.

Controller support would have worked great with this game. Controlling with the keyboard and mouse is ok for the most part, but when you get in a particularly hairy situation there is a very slim chance you will get out alive. A dual stick setup would have helped with the precision aiming and made the movement controls much smoother.

Note: Sometimes when I started the game error messages would pop up and the game would either crash, or start without music (the best part). Other times it would start up just fine. 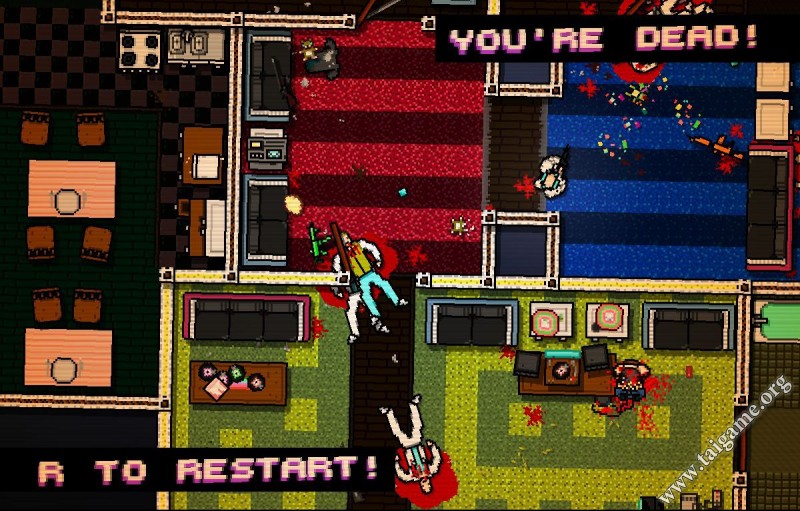 Get used to this, especially during the boss fights.

One good thing Hotline Miami has going for it is its overall look. The old school 8-bit style has become pretty popular with indie games these days, but Hotline Miami pulls it off well with its neon lights and gruesome deaths. The soundtrack brings it all together by making it sound like you’re in an 80s themed Miami crime show. It is entertaining to listen to, but my overall frustration unfortunately made it fade into the background most of the time.

I want to like this game, but I just can’t get beyond the wall of aggravation I’ve built up while playing it. Sometimes I felt like a complete badass after frantically finishing a level using whatever weapons I could scrounge up, but other times I felt lucky that I barely got out alive. After seeing the “enemies are predictable” loading screen and having the enemies do completely different things every time, I had to calmly quit the game and walk away from my computer.

With the addition of Oracle of Ages & Seasons on the 3DS Virtual Console, I now have 5 different Legend of Zelda games in my backlog, so I’m making this next one all Zelda all the time.

The votes are in, and the winner is The Legend of Zelda: Minish Cap.