Game of Thrones ended two weeks ago, and I’m still having withdrawal symptoms.

If you’re like me and can’t get enough of this series that is ever-growing in popularity, you will understand why I bought a game with mediocre scores on the cheap. The one thing that most people seemed to agree upon was that the story in the Game of Thrones game was pretty dang good. I’m caught up with the books as well as the TV series, so the next obvious choice is to get the game because I need to hear more about the backstabbing and treachery that happens to the poor people of Westeros. 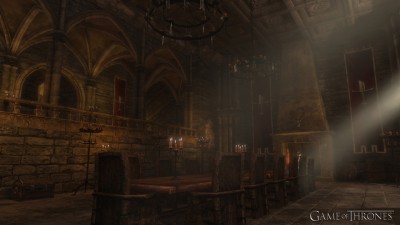 The locations are incredibly detailed

Game of Thrones takes you back to right around the beginning of the first book, but instead of following the Starks, Lannisters and that whole lot, you get some fresh new faces. This is great because odds are fans have already been through the story in the first book at least once and in some cases twice, if they have both the book and the show under their belt. You flip flop between the views of Mors Westford, a black brother exiled to the Wall for not doing what he was told during Robert’s Rebellion, and Alester Sarwyck, a red priest journeying back to Westeros for the first time in 15 years to assume control of the Sarwyck house. Fans will no doubt recognize some characters from the books and the show, but a majority of them are absent from the game.

The story runs on the dialogue choices you make, and it is easily the high point of the game even if some of the choices you are given sound exactly the same. You can shape both Mors and Alester in a surprising number of ways, so I made Mors a hardnosed, by the books member of the Watch, and my Alester was a fanatical servant of R’hllor. I would immediately jump on any religious comment Alester came up with, whether it was denouncing the Old Gods and the Seven, or giving props to R’hllor, and it was quite entertaining. The story takes a couple chapters to get going, but once it did it had the same affect on me as the books. At the end of every chapter I said something along the lines of “Oh man, this is getting crazy!” aloud, and like the books, I rarely wanted to put it down… unless I got to a Sansa chapter. 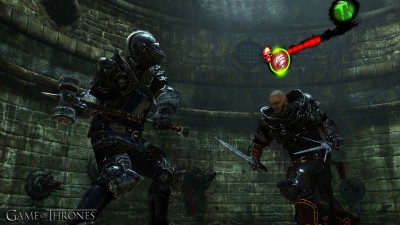 Tis but a scratch!

When you’re not deciding your own fate through words, you’re deciding it through exploration and combat. GoT is a mostly linear game, but you still have to explore nooks and crannies to find treasure. Apparently people just like to leave coins sprinkled around and they are free for the taking. Combat is similar to Dragon Age where you start by picking select moves from a wheel and watching your character perform them. And, of course, when they are dead you are free to loot their bodies without anyone judging you at all. Combat can get a little tricky when you’re still figuring out the skill wheel and which weapons do well against certain armor types, but in the end it boils down to knocking an enemy over and kicking him while he’s down. Still, that is fun in its own right.

Mors and Alester have their own special abilities. Mors is a skinchanger and can look through the eyes of his dog. This makes combat even easier when you can jump on enemies from behind as the dog and rip their throats out. He can also find items he might not have been able to find on his own. Alester’s ability is much more theatrical. He can summon fireballs in his hands whenever he wants, and with a foreboding gesture that involves his arms slowly rising with the fireballs in his palms, he can detect secret items and passageways. Obviously, this meant that I now had to do this every few steps so I could find everything. 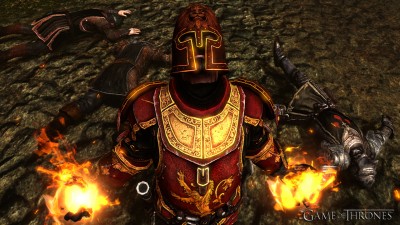 When you start your characters you are able to shape them into exactly what you want. You choose what kind of weapon style they use, what skills they have, and what various strengths and weaknesses they have. There are a lot of choices to make and I’m already tempted to go through the game again with completely different builds to see if it affects the game enough to warrant a second playthrough. Odds are I’ll just go through the skill trees until I find the skill that knocks whoever I’m fighting on his ass long enough for me to kill him.

Before I wrap this up I have to say I noticed that the equipment was rather strange. The main issue I had with it is that each armor piece has its own unique look and some of the more rare pieces are named after famous characters from the series. This idea is fine in theory, but I don’t think Mors would elect to wear a piece of wildling armor complete with a necklace of ears and severed heads hanging from it. I also don’t think that Alester would wear “Loras Tyrell’s cloak,” complete with the rose sigil, on his back. And what the hell is that merchant doing with Ilyn Payne’s gauntlets?! 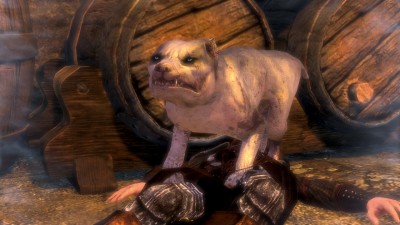 Oh god… what the hell is that?

The big elephant in the room here is the graphics. As you have probably noticed, they’re not so good for this day and age. You get used to most of it after a while, but the worst offenders are the characters themselves. Most of them look stiff and odd, and there seem to be a crazy number of passersby that look exactly the same. Mors’ dog is the worst of the worst though. It looks deformed; like the texture has been stretched in such a way that he looks almost like a terror dog from Ghostbusters. The locations look nice though, especially the Red Keep, as long as you don’t inspect the textures too closely.

Sound was another oddball; specifically the voice acting. I didn’t have much of a problem with the conversations in the game, although some of the actors sounded like they were phoning it in. My main concern was with the overall populace of Westeros. Sometimes I would walk through a bunch of people on my way to a quest and they couldn’t stop talking to the point where I would stop delaying my journey to hear them out. Other times it was quiet and absolutely nobody would speak up. The people would just stand there, unmoving, and it got really creepy.

If you’re a fan of Game of Thrones and need your fix as badly as I did, this game will do you right. You will be able to look past the awkward graphics and the exploitable combat and thoroughly enjoy the story of Westford & Sarwyck, Attorneys at Law. If you’re not a fan of the series, go read it or watch it first and come back to the game, because if you play this first you will probably take one look at it and not want anything to do with the series, and that would be such a waste.