Lets get the obvious out of the way. Magrunner looks a whole lot like Portal. But is that such a terrible thing? Portal is one of the most groundbreaking games of this generation and truth be told it has no real competition.

But the similarities right off the bat are a bit hard to ignore. The stark white testing chambers. The use of boxes to remotely hold switches. The gun-like device that controls the environment. All it needs is a story about a snarky robot who wants to destroy humanity. However the story is…. Absolutely bananas, but we’ll get to that in a bit.

Unlike Portal where you create dimensional shifts in flat surfaces, the basic premise of Magrunner is simpler to grasp, but much harder to master. Objects of a similar color are attracted to one another while objects of different colors push away from one another. You use this basic principle to push and pull platforms and boxes to reach the end goal. A cluster of similarly colored objects create a stronger magnetic field and of course, you always need to keep momentum in mind. It’s hard to get your head around some if the puzzles and admittedly, the game almost defeated us. While Portal holds the players hands to make sure they understand the basic principals of the game, Magrunner is much more devious leaving a great deal of discovery up to the player. The puzzles are downright diabolical. 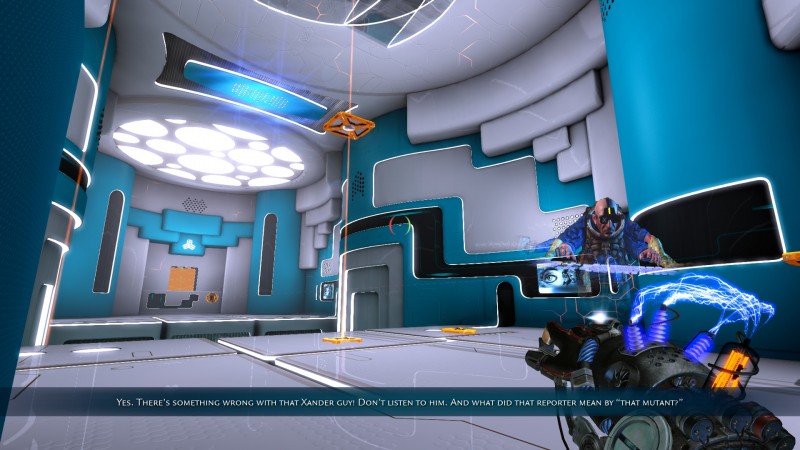 Left clicking changes an object’s polarity to one color while right clicking changes to another. Later in the game, players can fire into blank flat surfaces to summon your robotic companion who comes with his own magnetic charge, good for offering an additional boost or for fetching blocks from hard to reach or dangerous areas.

Now… For the story…

You play as Dex, a boy raised by a six armed mutant after his parents were purportedly killed. You enter as the underdog into a social media contest among seven strangers to compete in a giant testing facility to win a chance to go to space. Lost yet? Good. Hold on tight.

Things go awry as it becomes clear that the contest is simply a farce put on by a mega-billionaire to resurrect the almighty Cthulhu and his evil army to destroy the planet. Also your parents were Cthulhu cultists. Why is Cthulhu in a three dimensional puzzle game? Because magnets.

It’s perfectly natural if you need to reread all that again. It’s a lot to take in. The question “what?!” was raised with more than a few expletives several times during our playthrough.

But clearly most people don’t play puzzle games because of their story. It’s the puzzles they’re after. And Magrunner delivers some absolute brain ticklers. This is not for the casual market. 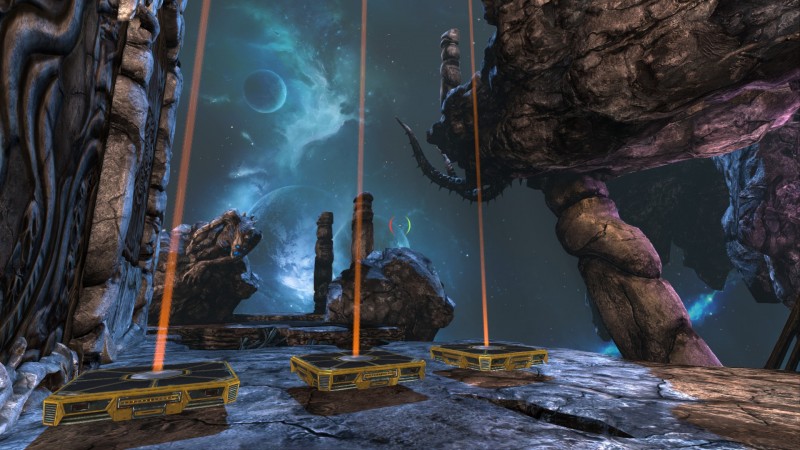 A few monsters come into play later in the game and most can be destroyed with explosive boxes or evaded through some nimble platforming. The monster models are ok, but their animations leave much to be desired.

Graphically, the game is no powerhouse which is both good and bad. It won’t take much to run the game on max settings, but occasionally some low resolution textures will stick out like a sore thumb. The pc options for the game are a little light, but the FOV slider reacts in real time which is a nice addition.

The sound design could use a boost. Picking up objects sounds great, while most of the rest of the sound effects feel pretty generic. The voice acting is fairly average, but the story is so bonkers is soars into the “so bad, it’s good” category.

We rounded out our brain busting playthrough at a very healthy 10 hours which is great for a mid range developer with a budget title. Sadly there is no cooperative campaign, nor is there a level editor.

Final verdict: we loved Magrunner but recognize this is not for everyone, but the budget price should make it attractive for the curious. The Saturday morning sci-fi story took us by surprise and the puzzles are so hard, we can’t help but feel some pride for finishing it (an emotion lacking in many modern titles). There are some edges that could use some refinement like the occasional unexplained death from monsters and objects that seem very far away. And the time spent in elevator rides used for exposition between levels could have been shaved in half or more.

Neither amazing nor a disaster, Magrunner is sure to find a cult following. If you find it on sale or if you’re a hardcore puzzle fan or if you’re a fan of Portal but you found the puzzles to be too easy, you shouldn’t hesitate to hit the purchase button. For most of the gaming world, this one gets a worth trying.