What happens when Capcom develops a Disney game not modeled after a movie but instead an amusement park? Well, the result is 1990’s Adventures in the Magic Kingdom.

In Adventures in the Magic Kingdom, the player takes control of an anonymous young boy and his hat which answers the question, “What would happen if Indiana Jones went to the old west?” You name the boy anything you want (try to be mature, it’s a family park) before taking him around the Magic Kingdom in pursuit of 6 silver keys. One key you can get by answering trivia questions and the others are found on five of the attractions. That’s right, you go on Disney rides! The only difference here is that while on the ride, you fear for your life. So in a way it’s exactly like going to Disney.

The game starts with Mickey asking Goofy for the golden key which, being Goofy, he left in Cinderella’s castle. And how do you get into the castle? Why, you need six silver keys and as Goofy explained, they are “somewhere in the Magic Kingdom.”

If you’re like me and grew up playing video games instead of watching Disney films, you will find the trivia section long and tedious. Sure, these days you can look up Cinderella’s last name or which character appeared in the most Disney movies on Google, but without that commodity the game can take a while. Get enough questions right and you’re ready for the rides. The remaining five keys can be done in any order. 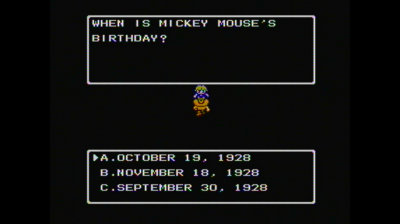 If the game deserves credit for anything, it’s the gameplay variation. Two levels play like platformers; one a car racer, one a train on the tracks where you control the speed and which path to take and one is a series of what we would now call quick time events. The genres meet with their aligning attractions and clearly some thought was put into the gameplay. The musical scores also fit each level’s atmosphere. This should come as no surprise as the composer is Yoko Shimomura who later scored tracks in Street Fighter II, Super Mario RPG and the Kingdom Hearts series.

The Haunted Mansion plays almost like a Castlevania game but instead of whipping candles, you just chuck them at zombies and vampires. A boy pelting vampires with candles until their heads pop off may seem out of place for a Disney game, but believe it or not the level never manages to lose the campy, family-friendly horror feel. 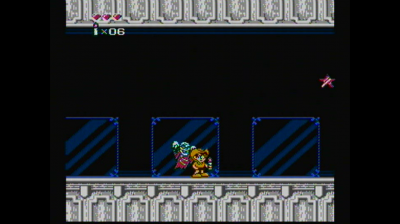 Pirates of the Caribbean plays similarly. The level is, however, not as linear as the Haunted Mansion and is too cryptic at times. You do not get a weapon until the level is already near completion and jumping on the pirates’ heads will only hurt you. The objective is to rescue six hostages–this is where a strange inconsistency will leave you scratching your head. Throughout the level you rescue six damsels in distress, all of them virtually identical to each other. When you complete the task, you are shown gratitude by a big bearded fellow who rewards you with a silver key. I don’t know who this guy is but I sure wasn’t the one who saved him. Something else interesting is part of the level really looks like the cave board in Aladdin for the SNES. Both games were made by Capcom.

Another strange aspect of the game is that it’s supposed to take place in the Magic Kingdom which is exclusive to Disney World in Florida. The overhead map, however, resembles more closely Disneyland in California. The resemblance is not only in the placement of the rides but also where the ice cream store and first aid station is which, as far as I can tell, don’t do anything in the game. 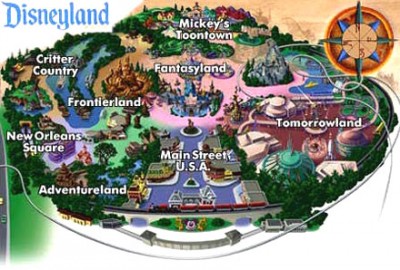 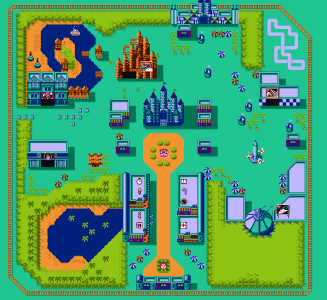 Space Mountain is a test of reflexes. You find yourself at the controls of a spaceship while a screen in front of you tells you what button to press; whether it’s A or B to shoot obstructing meteors or using the directional pad to dodge. It’s not difficult, but you blink at the wrong time and you’ll take a hit. Three hits and you have to start over. I counted 60 interactions until you beat it. Boring.

Autopia is a driving game where you have to race against Panhandle Pete for the silver key. Although there are other cars on the track, you actually just race against the clock. Beat the level in time and you win. There are obstacles that slow you down and at one point you actually have to stop and wait for a bridge.

The level based on Big Thunder Mountain has you in control of what feels like a runaway train. Mickey explains that you want to end at the second station. In order to do this, you have to slow down to avoid obstacles and choose the right paths while simultaneously praying you don’t hit a dead end. This level has a big luck element to it.

Throughout the levels you collect stars which can be used to buy more health, temporary invincibility, another life, or you can use the stars to briefly freeze time. Very briefly. Getting a game over will not erase your progress through the game. You will still have the silver keys you collected. Unfortunately, your stars will be gone.

The graphics are good. Coming from the 8-bit era, that pretty much means the objects resemble what they are supposed to look like. There is, however, an instance where your character, the background and flying objects bent on killing you are all the same color. You have to watch very closely for movement and you’ll find yourself wondering if they could have at least used some different shades to make it less bland and frustrating. One hit in this area will send you off a ledge and back to start. 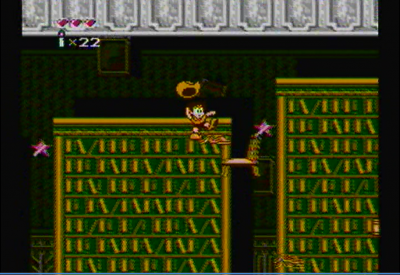 Honestly. I didn’t see it coming.

Adventures in the Magic Kingdom is a very short game. It is not, however, an easy game. The levels take practice before you can really master them but once that is done, blowing through it in a matter of minutes will prove very possible.