It’s nothing new — two incompatible monsters fighting for superiority. The public had their opportunity to play favorites between Stoker’s Dracula and Shelley’s Frankenstein in the 1971 film. Likewise, in 2003, slasher legends Freddy Kruger and Jason Voorhees  had their battle on the silver screen. But somewhere between those horror movie rumbles, the world’s favorite big screen automatons went at it in a blazing hell of robot carnage on the SNES. But can Robocop Versus The Terminator really be as epically action packed as it sounds? Unfortunately, the answer is no. 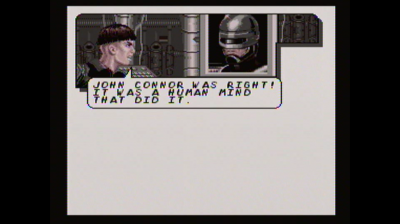 Robocop Versus The Terminator is based on the comic book series by the same name. The story panels in the game reflect that.

In my opinion,Virgin Interactive of the 1980s and 90s was a hit-and-miss developer which happened to make some of the best licensed games of the time i.e. Disney’s Aladdin (1993, Genesis version) and The Lion King (1994). Still, where those games became classics, Robocop Versus The Terminator faded.

The plot opens with a resistance fighter, Flo, going back in time to destroy Robocop because he, apparently, holds the founding technology for Skynet. Skynet learns about Flo’s time traveling and sends terminators to stop her and she’s killed before completing her mission. Robocop falls for a trap when he hears of a terminator infiltrating the Omni Consumer Products headquarters and becomes digitized, his body then used for Skynet purposes which is exactly what Flo was trying to prevent. His consciousness stays alert on some plane and he is well aware of Skynet’s coming to power. After Skynet’s takeover, Robocop manages transfer his consciousness into a robotics factory and rebuild himself in order to stop Skynet and save humanity.

Yes, even for a science fiction crossover of this magnitude the story is far fetched. Still, all paradoxes and machine-possessed factories aside, it is at the core interesting to see the juxtaposition between OCP and Skynet but only for those who really care about both Robocop and Terminator.  For most players, I imagine the story is just a formality that stand between the player and the game.

The 1993 title lacks visually. Most of the levels are too dark to see anything. I get it, they were trying to achieve a gritty look that might be expected from a movie in the Terminator series. Still, moving Robocop around the city can be frustrating when I’m constantly falling off of a building due to an indistinguishable break in the path. Other levels are like walking around with the lights off.

Another visual problem is the unbelievably large foreground. Most things in the game, including bullets, move very slowly but they are hard to see when a railing or part of a structure will take up most of the screen. Between that and the darkness, just being able to see is an issue.

At first sight I thought the game will play like Contra but I quickly learned this side scroller is much too slow. Robocop, who, by the way, is the only playable character (sorry Arnold fans), creeps like a sloth and jumps almost like he is in outer space, but still not able to get any height. Aiming at an angle is possible but Robocop’s ability to shoot downward is random and he usually won’t cooperate. This is a problem when there are so many low to the ground enemies, which I realized are much better jumped over. 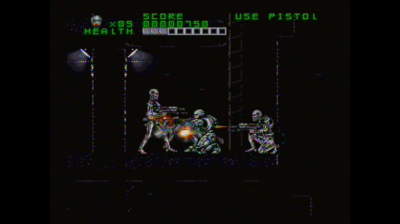 You better hope you have the plasma gun when you face these guys.

Every once in a while I encountered terminators which can’t be beaten with normal weapons. In order to defeat the invincible enemies, I had to shoot them many times, pushing them backwards with bullets onto a conveyor belt which sends them off a cliff or into an electrical current depending on the stage. This takes countless hits until the goal is reached. It is not difficult nor is it interesting, nor really entertaining. Luckily, all guns have unlimited ammo.

The game breaks its own rules when the terminators are downgraded from boss to enemy and can suddenly be defeated with bullets; lots and lots of bullets. They take huge amounts of hits and will constantly be falling to the ground and getting back up. Often times I was fending off three or four at once. Again, not too difficult with the right weapon, just tedious. However, due the maze element of some of the levels, I was visiting the same areas several times. This becomes a problem because the enemies regenerate. I can’t think of anything more frustrating than putting that much effort into killing the terminators only to have to repeat it over and over again when opening doors and backtracking. It took tons of patience.

Virgin Interactive took a concept with potential and delivered a mediocre game. The gameplay is slow and not nearly explosive enough for the respective namesakes while you are confined to controlling the less interesting of the two bots.

Game: Robocop Versus The Terminator