Hang it all up. The job, the house, the neighbors, and head to the tropics. That’s the dream, right?

Well, escapism has always been The Sims’s vocation. Island Paradise is the most recent, and final expansion pack to the game that keeps on giving. Compared to some Sims 3 expansion packs, Island Paradise is bigger and better than we ever expected. In fact, it’s far more ambitious than anything that has been attempted yet with the game and gives us great hope for The Sims 4.

But let’s not get ahead of ourselves just yet.

Having already lived successful lives within Sims 3, Island Paradise didn’t appear to add much to the core experience of the game while living in Sunset Valley. Certainly, there was a healthy slathering of new women’s clothing, a few new duds for the dudes, and some new building options, and the ability to snorkel and go wind surfing in the bay, initially our thoughts were “so what?”

Unlike other expansions like University Life and World Adventures, the massive benefits that Island Paradise adds aren’t immediately apparent.

Having a few maps already installed, we didn’t immediately notice the brand new Island Paradise map from our dropdown menu. But when we were tinkering with the real estate options on our PC, we finally found the game’s new location. Island Paradise isn’t a temporary vacation. It’s a permanent relocation to a tropical island chain, complete with new places to explore, people to chat up, skills to perfect, and entirely new gameplay mechanics, making Island Paradise the most drastic expansion of them all.

We sold everything in our home and relocated to a rather luxurious house boat full of all the modern amenities: television, master bedroom, full kitchen, office, jacuzzi. Of course, we did some remodeling of our own and added a washer and dryer, a small gym area, some new all in one bathrooms (shower and toilet in one small space saving unit) and of course, a kung fu training dummy.

The benefits to the houseboat were immediately apparent. Explore the new open world without needing to leave your home base. Paint new landscapes direct from the deck. Have your sims go swimming right from their back door. You can upgrade the houseboats with an autopilot, foghorn, and increase their maximum speed if you have the tinkering skills to do so.

Swimming, by the way, has been expanded with snorkeling and scuba diving, both of which result in new precious items like seashells, sunken treasure, and treasure maps to reveal hidden locations in the overworld. The sharks, at first, we thought were docile, until we got into a tussle with one. And then, of course….. there’s the Kraken which we’ll leave as a surprise for Sims players. As you get better and better at scuba diving, more and more dive spots become available to you. 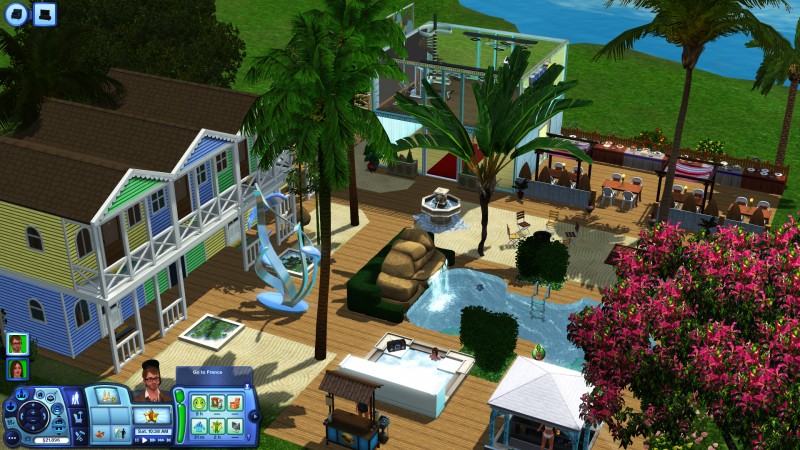 But you don’t need to own a houseboat to enjoy the exploration (it just makes it more convenient). You can purchase a number of boats, jet skis, and windsurf boards to get around. If you can’t afford your own wheels or flotation devices, you can always take a cab which come both in the street and water varieties.

The exploration within Island Paradise is extensive and will take players dozens of hours (if not more) to complete, but that merely scratches the surface of what can be done in Island Paradise. The new build options are impressive to say the least, letting virtual architects out there really stretch their creative muscles. There are glass bottom and sided pools to build, piers to construct, and more. For the ambitious, Island Paradise has a lot to do.

But why stop with just building a mega structure? Why not build an entire complex? And then turn that complex into a resort. And then staff that resort. And then customize the entire visitor experience at that resort from what is served at the buffet to what your staff wears to what types of relaxation packages your resort offers.

Yeah, you can do that within Island Paradise. The new mini game is hardly mini. It could become your Sim’s full time career as they maintain the property, balance the budget and staff to maximize customer experience and still turn a profit. But it’s not cheap. Building your own functional resort takes a lot of seed money, giving long-term sims players some more end game time to their Sims experience.

Like most Sims expansions, Island Paradise adds a new supernatural Sim: mermaids and mermen. You can meet this species underwater, chat them up about kelp, fish, and sharks, and if they like you enough, you can invite them on land where their fish parts turn into scaled legs. And yes… you can have relations with them. If you become good enough friends with them, they can even teach you how to become one yourself. 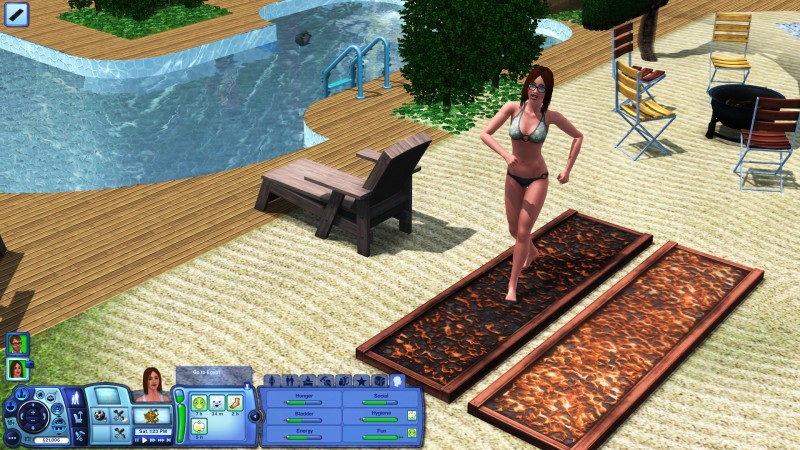 But, all this ambition, open world space, and new forms of transportation come with bugs… some big, some just plain annoying. At launch, Island Paradise needs a solid patch to cover up a few of the holes. Water taxis, while convenient, can be quite annoying, not just within Island Paradise, but in the expansion worlds as well. They can get stuck in the smallest spaces, and sometimes sims will hop into them when only needing to travel a few feet in the water, instead of swimming the distance. Calling for a recurring maid service on your houseboat will have the maid only appear once, and you need to call daily if you want them to return. And most annoyingly, 50% of the time if you send a sim into an underwater cave to explore, they’ll automatically glitch out of the ocean and reappear on the beach (sometimes pretty far away), reading a book in their scuba gear.

But those growing pains aside, it’s hard to deny how absolutely addictive Island Paradise is. The new world dusts off some of the games older mechanics and makes the place feel new again. If you’re a Sims 3 owner, we can say it’s worth buying, just know there are some wrinkles that need some ironing out. It’s worth either sending your current sims on a whole new adventure, or creating a brand new sim and starting everything again from the ground up.