Set in the fantastic world of Dunwall, Dishonored told the tale of Corvo as he rescued the Empress’s daughter Emily after her mother was assassinated at the hands of Daud, the leader of the assassin group known as The Whalers. It’s a tale of retribution from the victim’s point of view.

But with the completion of the game’s DLC extras, The Knife of Dunwall and The Brigmore Witches, players will finally know both sides of the story. 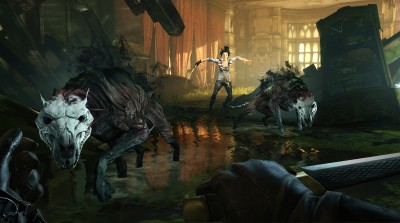 As Daud, you need to wriggle your way through some of Dunwall’s warring factions, The Dead Eels and The Hatters, to make your way to the Brigmore mansion to stop Delilah, the leader of the witch coven, from weaving a spell that may doom all of Dunwall.

Brigmore Witches uses the same mentality as the core game: accomplish your mission however you see fit by means of stealth or force. This basic gameplay concept opens the DLC to multiple playthroughs to experience the game in its fullest. High or low chaos, silently or ostentatiously. Like the main game, we found most enjoyment by playing as a ghost, never spotted, and never killing anyone, but then again, we’re stealth junkies.

The newest adventure in Dunwall spans across 3 ½ levels. The reason why we say “half” is because some instances are painfully short, especially compared to the super beefy levels the standalone game boasts. In the end, the game will clock you in between three or four hours which isn’t too bad for the $9.99 price tag. If that pill is a little too big to swallow, we’re predicting a complete edition in Dishonored’s near future, based on Bethesda’s recent track record with DLC.

The final level in Brigmore Witches is one of Dishonored’s finest, touting a large mansion in a gigantic open environment with multiple entry points. Without a doubt, it is also the creepiest setting to be found in all of Dunwall. The other environments within Brigmore Witches hold up Dishonored standards with the exception of the prison level which is partially recycled from the core game. But this time, instead of breaking out, you’re breaking back in…. and then breaking out. 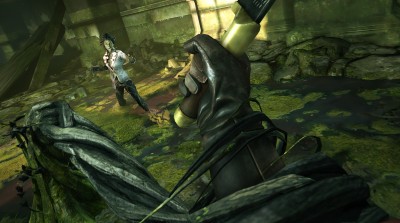 The voice acting holds up wonderfully, and we were happy to see more female enemies skulking around which cuts down on some of the repeated conversations that you’d hear from the standard male guards as they interact with one another. There are no tallboys or anything like them… so… that’s kind of sad. The super-enemies are the witches themselves who act like a more powerful version of Daud’s assassins, teleporting from point to point, but able to take and deliver more punishment. And now there are also some demon dogs that can only be killed by destroying their skulls.

If you’re a Dishonored fan we can recommend Brigmore Witches to practice your digital ninjitsu. It’s wonderful to see this dark tale told from the other perspective. We do wish, however, that it was a bit on the longer side especially for that price tag. If you happen to find Brigemore Witches bundled with The Knife of Dunwall for a discount, it’s a good buy. But as it is, it’s enough to hold us over until our wishes come true and Dishonored 2 is announced.