Ittle Dew looks like a clone of The Legend of Zelda. It’s a top-down adventure. The protagonist wears a green tunic and she has a little winged companion. You beat up baddies with your sword and solve environmental puzzles. Even the story cuts it close to Link’s Awakening.

But while the similarities are there, the end result definitely feels original enough to not call Ittle Dew a “ripoff.” Ittle Dew is a beast of its own, complete with its own triumphs and failures. 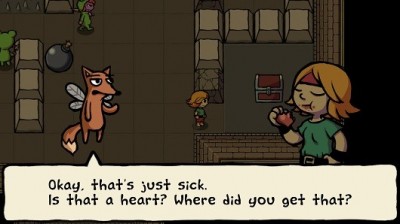 Gamers start their tour by crashing their raft on an uncharted island and immediately begin seeking adventure in caves and castles. Ittle Dew fights baddies with her stick, but eventually upgrades her arsenal to include a flaming sword, a portal wand and a freeze spell.

And that’s it. Her inventory is pretty light. But using these three items often in combination is the only way to bypass the tiny island’s brain-busting puzzles. The puzzles themselves ramp from fairly simple tricks like defeating all the enemies in the room or lighting all the candles, to some pro-level conundrums that will stop and make you scratch your head for a bit. The change happens pretty early on in the game, so it won’t take long before you’re engaged in the game’s key feature.

But shortly thereafter, the game ends. It took us a piddling four hours to complete Ittle Dew’s main story, but of course, there were still some collectibles to find dotted across the island. Even so, that time frame felt too short for the amount of potential the game shows.

And Ittle Dew is absolutely bursting with potential. The writing had us cackling at our desks on more than one occasion. Ittle Dew the character is a sparky irreverent little girl who loves to beat stuff up, make snarky comments, and eat things she finds on the floor.

The animation is top notch as well. The style of each character is perfect for the genre and the time put into every drawing really comes through in the final presentation. However, we do wish just a little more time was put into Ittle’s turning animation (which is nonexistant) and the swinging motion which stops midway through her swing. She swings her sword like anyone else would snap a wet towel and it feels unnatural. 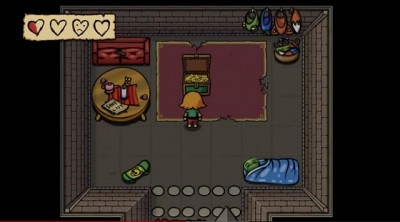 The exploration is sadly on the super light side. While Zelda games focus a little more on adventuring to find the next dungeon and battling baddies, Ittle Dew focuses almost entirely on solving those aforementioned brain busters and almost no time scouring the world for secrets.

But between the great visual style, cartoonish violence where the enemies explode into confetti, pitch perfect writing, and the simple game concept, Ittle Dew makes a remarkable kids game, a phrase we don’t get to say enough.

On the other hand, the adventure ended entirely too prematurely. We couldn’t help but think “oh that’s it?” when we were finished, especially for the price tag which we feel should land in the sub $10 range. Ittle Dew is just brimming with possibility and we hope to see her return for a longer adventure in a larger world with more items. So, if you’re an adult looking for a Zelda-sized game, you might want to wait for the game to go on sale, but if you’re looking for something for your kids to play, Ittle Dew will probably last a little longer giving you some more bang for your buck.