Mappy-Land is an NES exclusive and sequel to the arcade platformer Mappy. The player takes control of a mouse named Mappy who, since his first appearance in 1983, became a lesser-known but always prevalent video game mascot. 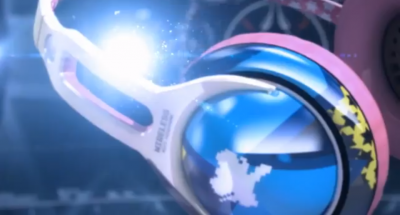 Mappy makes an almost subliminal appearance in a teaser for Ace Combat: Infinity

What I have always loved about Mappy is that he has refused to fade into obscurity. For instance, the Ridge Racer series features numerous cars named after Mappy and the Japanese title Donkey Konga 3 lets the player play the Mappy theme on bongos. More recently, a teaser for Ace Combat: Infinity flashes a digitized image of Mappy on a pair of headphones after a mysterious woman can be heard humming the Mappy theme. But is this mouse worth all these enigmatic references?

According to the Mappy-Land manual, Mappy is a vacationing policeman who is on the search for a stolen engagement ring he got for his girlfriend, Mapico. And who are Mappy’s foes? A rough band of cats and humans aptly called the Guchi Gang.

Most NES games have simple gameplay but have a high difficulty. Mappy-Land, however, has incredibly simple gameplay and it’s pretty easy. Well, it’s easy at first anyway.

The game has 4 different stories. First, Mappy is collecting stolen cheese which he is bringing to Mapico for her birthday. After completing that, Mappy must collect engagement rings in the same manner. This just left me wondering why anyone would need so many engagement rings and why were the rings bigger than Mappy? In the third story Mappy must collect Christmas trees for the holiday bash the newlyweds are throwing.

I know it’s just an old video game and we are all just supposed accept this kind of thing but why do they need so many Christmas trees and why is a pine tree smaller than a piece of jewelry designed for a mouse to wear on her finger?

Well apparently Mappy and Mapico had too much eggnog at their Christmas party because now there is a little Mappy Jr. running around which leads to the fourth story: Finding a ball for him to play with which, again, for some reason, amounts to many. 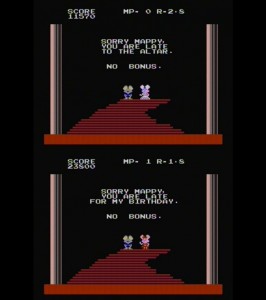 So is the game as repetitive as it sounds? As I played over the same worlds I noticed the levels growing in difficulty and small changes to the environments. Some levels have bonus stages and sometimes I had to collect a special item in order to move onto the next board. This adds more variation to the game but it still has a lot of repeating scenery and music.

In addition to collecting the levels’ objective items there are also weapons and traps. Cat toys can be used to distract the Mukies (what they call cats) and humans (called Nyamco) are distracted by currency in the form of gold coins. The Mukies are also thwarted by fish and pots.

To be honest, I think what the game manual calls “pots” and actually catnip. In the manual it definitely looks like a pot but in the game it appears to be a red bag tied at the top. In the manual it is written that the cats faint when they go near it and they do, which is the opposite effect of catnip so I guess I’m wrong on this one. Still, if I were a mouse being chased by cats the last thing I would want to do is give them what is essentially kitty cocaine.

Likewise, the gold coins in the game look nothing like their game manual counterparts. I had no idea what they were supposed to be before reading the manual. For one thing they are white and not gold and much too oval shaped to be coins. If I had to guess I’d say the gold coins look much more like a white cheese grater.

A huge problem with using these otherwise helpful items is that there is no way to queue them. If I’m being chased by a Nyamco and drop a cat toy, it will have no effect but the game insists on dropping the items in reverse order in which they were picked up. For example, let’s say I gathered gold coins, and three cat toys, in that order. Well I now have a Nyamco closing in on me so in order to get him off my back I have to waste my three cat toys just to drop the coins so I can get to safety. That’s what the “select” button should be used for; to select the appropriate items. 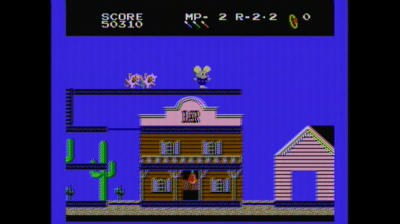 In addition to these items, most levels have traps lying around that may be used for Mappy’s benefit. These include fireworks, cannons, punching bags, bowling balls, pulleys, horizontal bars (used for swinging into enemies) and sticks. Timing is everything when using these largely stationary weapons and getting a combination kill not only racks up the points but is largely satisfying and makes navigating through the level easier.

The music in Mappy-Land would be more bearable if it wasn’t on such a short loop. The average theme loops about every 35 seconds and since the game repeats worlds, the same songs will come up again and again in all their familiar piercing, high-octave melodies.

Occasionally in the land of Mappy I was thrown a wildcard and put into a level with unfamiliar scenery. One such level has invisible platforms so I could not see where I was going. I could not tell if there was a wall between the enemies and me and it just came off as more of a lazy attempt to add difficulty as opposed to creatively challenging the player while adding nothing but unrewarding frustration.

Mappy-Land has a limit on lives but continues are infinite as long as the game stays on. Continuing from the game over screen erases all gathered items but will start Mappy off on the beginning of the last level he was on. Fairly generous for a game of this time.

Mappy-Land is a long game but is fun only for a short time. The incentive to complete the four stories wears off about half-way through.  It is a game out of place since it was designed in an arcadey fashion but available only on NES. Perhaps it would have been better enjoyed on a large cabinet.