Roguelikes (games where rooms, enemies, missions or scenarios are randomly generated, death is permanent, and are typically turn-based) are becoming more popular. But more importantly, they’re becoming more sophisticated and their mechanics are spilling into other genres in some pretty exciting ways. Rogue Legacy takes a rogue-ish formula and mixes it with some heavy Castlevania: Symphony of the Night inspirations. The results are fantastic.

Rogue Legacy is… hard. It’s very very hard. Depending on how refined your sidescrolling skills are, Rogue Legacy could take you anywhere from a few hours to never being able to finish it ever. 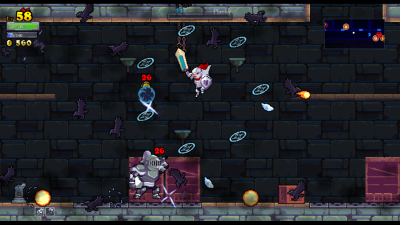 You play as a knight set to clear your besmirched family name by conquering a demonic castle. To make the game a little easier as you go along, you can collect cash by defeating enemies and bashing up the furniture. Money can then be spent to purchase new levels, and unlock different knight classes and abilities or purchase upgraded weapons and armor if you happen to have found the blueprints hidden in the castle.

Death for your character is permanent. Once Sir Bartleby dies, he’s gone forever. But another family member will take up their place and try to conquer the castle. Each family member is unique with their own skills and maladies. They can be giant or dwarf, suffer from irritable bowel syndrome, dyslexia, colorblindness, stereoblindness, ADHD and a ton of other mixable and matchable traits that grant each character their own unique bonuses and hardships. It’s this genealogical touch to the ever-changing skills of the protagonists that keeps the game interesting, challenging and humorous.

But with each death and new character, the castle changes its layout. To prevent this, you can promise a percentage of your precious income to the castle mechanic who can lock the castle layout down. This comes in handy once you finally find a boss and are a high enough level to beat it down.

Before you enter the castle, Death demands a tithe starting at a whopping 100% of your coins which makes stockpiling your cash between generations almost impossible. Eventually, you can have death take less and less cash by upgrading specific (and very expensive) level upgrades.

Rogue Legacy is fun. There’s no two ways to cut it. The controls are precise enough to play with mouse and keyboard, though we do recommend connecting an Xbox 360 controller to your machine for better results. The music is great and artistically, the sprites look fantastic. We love the jaunty march of the knights as they constantly hold their swords up high. 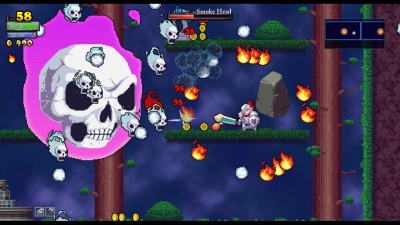 But, there are some downsides to the game. Rogue Legacy could use some more enemy variations to give the castle and its quarters a little more personality. As we mentioned earlier, the game is very punishing (which we’re not holding it against it), but if you’re not fantastic at sidescrollers, the game can become a real grind fest to raise your stats high enough for you to play at a comfortable level and finally conquer a boss or two.

For $15, Rogue Legacy is still a triumph. It’s quirky, humorous, challenging, and you’ll get your money’s worth before you complete the game. In fact, the game will call for replays with New Game + and New Game ++, or if you simply want to challenge yourself by completing the game with lower and lower levels. Despite its obvious inspirational roots, it still manages to show off a surprising amount of creativity. If you’re a fan of roguelikes or Castlevania: Symphony of the Night and its offspring, then we wholeheartedly recommend checking out Rogue Legacy.