After ping-ponging between EA developers, the NFS series may have  found a home with Ghost Games, a new company formed mostly by Criterion staff members. So did Ghost do well enough with Rivals where we’d want the long running series to find a permanent shop with the Swedish developer? Or is this title better left for the scrapyard?

With gameplay that borrows from both 2010’s Hot Pursuit and the more recent Most Wanted, Rivals is set in a cops versus racers open world with nothing separating you from single and multiplayer (unless of course you’re not connected from the internet). While driving around Redview County, you will encounter other players. You can challenge each other to races or bust one another depending on your respective roles. 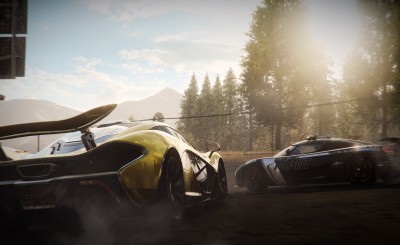 It will always be us versus them

Redview County is a varied landscape. With open seas splashing against the bordering sea wall, snow covered windy mountain roads, wide-open dry deserts, forests and farmland, you probably won’t get tired of seeing the same ol’ thing again and again. There is however a lack of the urban scenery that is usually associated with street racing and the amount of debris or leaves being blown around at any given time in Rivals is too exaggerated to be convincing. Busting through roadblocks and catching air looks as good as ever. Civilian traffic is so light it is practically nonexistent so head on collisions with a slow moving SUV or truck while taking a blind corner are rare. Your car will start to show damage but it’s mainly cosmetic and inconsistent to the crashes. Sometimes after a particularly bad crash your car will appear destroyed on the side of the road with a detached bumper appearing and disappearing on the pavement.

Customization is back… at least somewhat. Racking up Speed Points allows you to buy cars, performance upgrades, and weapons. You can also use the points to purchase decals with predetermined designs and placement. As a cop, the cars are free and Speed Points are spent solely on weapons.

Racers have hideouts and cops have command posts. These are essentially garages found all over the map and you are never more than a mile or two away from one. This is where you can buy and switch cars, purchase upgrades, look over objectives and make the move between cop and racer.

When playing as either cop or racer, your objectives are permanently fixed on the right side of the screen and the Easy Drive feature makes it simple to find where you are going.

Using weapons, or Pursuit Tech as it’s known, is important to your success in Rivals. This is true for cops and racers. Among them is the Elecromagnetic Pulse, which shuts down the electrical equipment in a targeted car; the ability to call in road blocks; spike strips; turbo boosts; you know, the NFS usuals. Some Pursuit Tech overlaps to both sides while others are found on only one side of the law. Racers can use Pursuit Tech to best the cops but also to slow and disable fellow racers. Rivals proves there is no loyalty among criminals.

There is always something going on in this open world and a moment of rest is hard to find, especially without a pause feature. As a racer, completing tasks can be made a bit more difficult when a cop wants to bust you for Speed Points and a great deal of satisfaction. This adds to the excitement of Rivals but it can also be frustrating when all you want to do is finish a time trial and the other players won’t leave you alone. 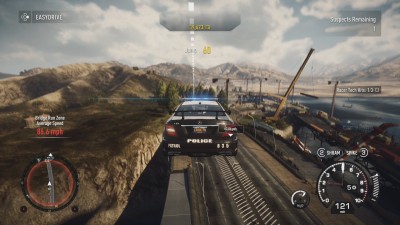 While roaming around Redview County, Head to Head races can bust out at any time. Get close enough to another racer and all it takes is for one of you to challenge the other. There is no loading screen, no delay, no hiccup. The race starts right then and there and the adrenaline isn’t interrupted for a second and it’s great. Head to Head races have a determined route that you follow on the GPS and cops will often get involved giving it the insane NFS feel that kept the series fun and alive for so long.

As a member of the Redview County Police Department your mission is clear: bust racers and get Speed Points. Busting a racer either by disabling his vehicle or pinning him against the wall long enough will grant you all the Speed Points he has earned so far in that session. This can lead to a huge payoff or a disappointment. Regardless, busting racers comes with a satisfaction that is scarcely met in video games. Losing your Speed Points to a cop is a lousy feeling and forces racers to balance out risk and reward. Rivals did not go the story route this time as they did with the Run and that’s ok. What they do give you is brief dramaturgy and the tension that exists between racers and cops through faceless cut scenes and disembodied voices. If nothing else, it gives the scenario a sense of purpose.

The amount of cars is ample on both sides. It is not overwhelming as it was in last year’s Most Wanted nor will it leave you wondering where you favorite make is. The cars sound great too and if the game’s soundtrack doesn’t get you in the mood for racing (and it most likely won’t) you can substitute it for your own tunes. Force can be heard behind the crashes and the screeching of tires while executing a drift add to the overall experience.

Constantly having to be connected to the internet is risky. Getting disconnected from the server is rare but it does happen. Luckily migrating to a new host is quick and, even more of a relief, your progress is not lost.

Repair shops are found all over the map. They have the appearance of gas stations and a skilled driver will be able to drive right through one without missing a beat. They fix any damage to your vehicle as well as resupply your weapons.

Rivals offers maximum thrills without being overly dramatic. The camera will not slow down no matter how much air you can catch. Remember, Rivals is set in real time. It’s a game that lives for the here and now.

If you’re a fan of realistic racing with down-to-earth specs and physics, this game may not be for you. But if you’re a thrill seeker who is constantly looking for a challenge and risky payoffs, you’re going to want to pick up Rivals at the starting line.