I can’t even tell you how long it has been since we were promised a machine that can play NES, SNES, Famicom, Super Famicom, GBA and Genesis. Over the past year we’d get closer to the dream only to have it torn from us time and time again. After the second or third delay, blogs sprouted all over the internet asking Hyperkin for answers and bloggers even showed skepticism that the system would be released at all. The tone is changing, however, and it feels as though all of that (plus a last minute $40 price increase) is forgiven and Hyperkin’s Retron 5 is being met with excitement from fans of classic gaming.

Half emulation machine, half clone console, the Retron 5 boasts a 720p output, save states, periodic console updates and the ability to use the ACTUAL ORIGINAL CONTROLLERS on the system, just like nature intended.

The overall design is nothing fascinating.  It is made of a shiny plastic and feels very flimsy. Shoddiness is something that is expected for all clone consoles but for one with a $140 price tag it is disappointing and a little infuriating considering the original 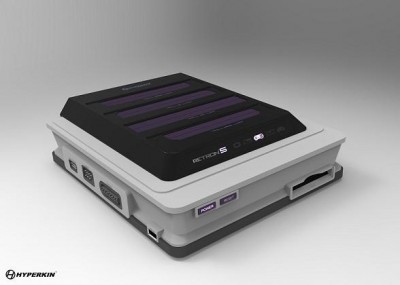 goal was to keep it under $100. Sometimes just removing a cartridge from its impossible grip makes you feel like the casing is going to break.

Famicom, NES, SNES and Genesis games are loaded on top so this is a very long console and it takes up a lot of room. The GBA slot is on the front of the console where one might imagine a controller port would be.

It should be known that this is more of an emulation machine than anything a straight up clone console. Insert a game and it loads in seconds, allowing you to backup game data within the system’s 1.2 gb internal memory or to an SD card. However, playing a game requires you to have the cartridge inserted at all times and, unlike a clone console, only one game may be inserted at a time. Games can be removed while on the main menu screen and a new game can be inserted and played without having to turn the console off and on again.

The Retron 5’s looks and sounds are spectacular. Retro games look great in HD, displayed with superb, vibrant colors and gives the player video filter options which can be used to fine tweak a game’s appearance to one’s own liking. There also exists an audio enhancement option which makes the music and sound effects sound almost as if you were playing a more modern remake. Any video lag can be remedied by adjusting the console’s settings and making sure your TV is in video game mode. 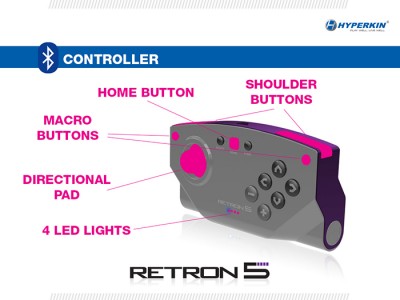 One of the greatest selling points for the Retron 5 is the fact that there are two controller ports for each system and the original systems’ controllers are compatible. The ports are on the sides of the console.  Bundled with the system is a Bluetooth controller. The controller design is good enough for casual gaming sessions: 6 face buttons, 2 shoulder buttons and a micro chipped joystick whose constant clicking is more annoying than it is satisfying. A d-pad is lacking from the controller design which is unfortunate because it is preferred over the joystick for almost all games the Retron 5 supports. Unless you don’t own the proper controllers or are forced to sit far away from the console, the original, old controllers are your best bet. Turning on the console with the bundled controller is unfortunately a feature left out.

Hyperkin’s goal was to make the Retron 5 as close to %100 compatible as possible and, for the most part, it is. There is a lot of talk that it cannot play unlicensed games but I have tried it with four different Wisdom Tree games and they all worked without issue (a miracle?). Hyperkin wanted us to be able to play 8 and 16 bit era games on our HDTVs in a way that we could not before and this was achieved impressively. But in this achievement lies a big compatibility problem. It ONLY plays in HD which it does via HDMI. There is no AV output. This means that light guns which rely on CRT TVs for their functionality are useless. For the layman: You can’t play Duck Hunt with a Retron 5. SNES’s Super Scope is useless as well.

Each game loaded into the Retron 5 has the ability to use save states. There are ten allowed save slots per game which can either be loaded from the system’s internal memory or an SD card. This feature works flawlessly.

Since the platform does not connect to the internet, updating is a little bit of a chore. It requires you to load an “update request” from the Retron to an SD card and downloading the latest firmware update from your computer, saving it to the same SD card. You then have to put the SD card back into the Retron and install the update. Overall, it’s a simple procedure with only a little bit of running back and forth. It is well worth it.

Retron 5 gives you the option to use cheat codes by downloading them from Hyperkin’s website onto an SD card and inserting that card into the back of the system. It’s a lot like using a Game Genie. The cheats work, however, sporadically. Sometimes they work fine and other times they don’t do anything. On a few occasions all they did was cause strange and bizarre glitches.

A gaming purist may insist these machines rob us of something intrinsic, something that can only be experienced through playing the original games on their original platforms. When considering the Retron’s abilities and add the original control pad support, it is clear that this machine takes us as close as we can get in this an age when the NES in the attic has more issues than a simple pin connector can solve. Not to mention the fact that CRT TVs may only be in antique stores one day soon. Ultimately it is up to the consumer to decide whether or not it is worth it to drop such a heavy price on an emulation machine.

The Retron 5 is far from perfect but a lot of bugs managed to get fixed with the first update. Hopefully, with more updates to come, Hyperkin will allow the newest Retron to live up to its hype and we won’t feel cheated for having waited so long.