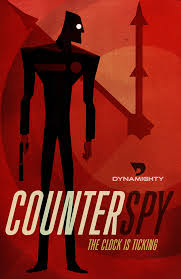 Counterspy, the first project of the new development team comprised mostly of LucasArts veterans, Dynamighty, is a mixed bag of simple game mechanics and some relentless difficulty. Taking place in an alternate Cold War era history, Counterspy’s protagonist is an anonymous agent working for C.O.U.N.T.E.R., an agency whose mission it is to keep the feuding superpowers at bay. You switch between infiltrating both American and Russian bases in an attempt to gain intelligence and stop both powers from blowing up the moon. With its cartoony graphics and humorous dialogue, Counterspy satirizes the Cold War, American and Russian life and in many ways the espionage genre as a whole.

Counterspy is a colorful 2D side scroller which switches to a 3D perspective when taking cover behind walls and boxes. Being able to shoot down corridors but not being able to actually explore them as you are constantly on a 2D grid can be a bit of a mind tease but it becomes second nature.

Weapons can be bought from the money you earn while gaining intel and from uncovering blueprints. Ammo is somewhat scarce and may be purchased between levels at a steep price so being conservative is important. Obviously, remaining stealthy is always the best strategy but that is much easier said than done. Enemies are plentiful and taking out one without others noticing is next to impossible in most situations. 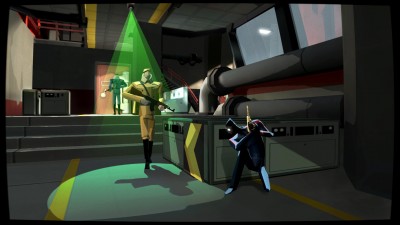 Headshots have never been as important as they are in this game. Shoot an enemy in the body and prepare for frustration. It takes an overwhelming amount of hits but you yourself can go down quite easily.

The game’s simple graphics play off the satirical feel quite well and are actually visually impressive at times. This is especially so when switching between 2D and 3D. My only real critique here is that the enemies look incredibly blocky up close like a mixture of Team Fortress and Goldeneye.

Keeping the DEFCON levels low (or is it high?) is a huge part of the mission but also a difficult part. The DEFCON level changes by a point when a camera sees you, upon death, or when an enemy suspects you and radios for help. That one is the worse. Even if an enemy soldier doesn’t see you he can still pull out a radio and inform others that he suspects a spy has infiltrated the base. The only way to stop him is to take him out which will most likely alert the others anyway. If the DEFON level reaches zero you must run to the end of the level while dodging bullets in an attempt to outrun the clock. If the countdown reaches zero, missiles  trained at the moon will launch and it’s game over.

Levels are generated randomly so when replaying missions you won’t have the same exact experience twice. Some rooms will however remain the same and it can lead to redundancies in the levels.

Counterspy is at the end of the day an average game. It will frustrate you but don’t be surprised if you get the inkling to play it randomly throughout your day because it does offer a satisfying experience at times. It is a short game with a $15 price tag but its difficulty will keep it around for a while.