Located in Sweden, independent developer NightNode Software is just entering the video game market, and have burst on to the scene with an incredible game that is an absolute joy to play. The developers themselves take pride in their product and it shows – when I was having difficulty finding a match to play in, they offered to join me in a game to really show off what this game feels like at critical mass. And the hour or so I spent playing with them was genuinely some of the most fun I’ve had playing video games in a long time.

The game, dubbed Orbital Gear, is a 2.5D multiplayer arena shooter with the visual eye-candy of Geometry Wars matched with the frenetic gameplay of Unreal Tournament, all wrapped up in the side-scrolling simplicity of Contra. In Orbital Gear, you control a mech wielding incredibly powerful weapons and abilities as you navigate a field of planets and structures, each with their own gravity well for you to slip into and out of. The game is extremely fast-paced, and learning to control your avatar as they slingshot from one celestial body to another while still managing to aim a weapon at your enemy is both challenging and rewarding.

But before I really dive into the gameplay, I want to take a moment to briefly go over just how aesthetically pleasing Orbital Gear really is. The backsplash in each level is gorgeous, giving the impression that these battles are taking place in a distant nebula, really solidifying the deep-space feel. Vibrant colors are a clear motif in the game, to its credit, and the high-contrast between characters, planets, and weapon fire is welcome in such a high-intensity environment. Once you get to around 6 people playing on a given map, the action starts to look more like a laser-lights show than a battleground, which is highly appealing visually. 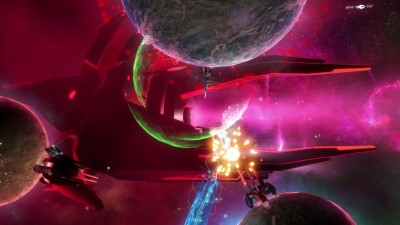 The sound design is also masterfully done. With each weapon being so unique, it was good to hear that the time had been taken to make sure the firing sound really matched the visual, and made it feel like you were really firing a destructive energy laser, or a sort of futuristic napalm launcher. One weapon, called a “Pulse Rifle,” fires a wave of energy that extends until it hits a planet or other surface, where it then explodes, and the sound this gun makes was enough to make me continue using it over the course of several lives in a game.

It’s also worth mentioning that the music really fits in well with the overall theme of the game. While I’m not usually a big fan of electronic music, in this particular case it emphasizes the style of gameplay perfectly, and really doesn’t come off as too wub-wubby.

But the gameplay is what really makes this indie game shine. The incorporation of gravity as a main mechanic in the game is done with incredible skill. Guiding your mech from planet to planet and learning to use the effects of their gravity wells to your advantage is easy to learn and difficult to master. One problem that previous games I have played that have incorporated this mechanic seem to have – even Super Mario Galaxy, to an extent – is how it handles changing directions once you’ve landed on a new sphere. In Orbital Gear, this was never in question. I was able to fluidly navigate through the map without ever having my character switch directions on me – even if that meant I was often holding the “A” key when I was running to the right. This kind of intuitiveness is rare even among triple-A games, and speaks volumes about the developers.

The game is also incredibly responsive. Because it is so high-octane, there is no wait time between moving your mouse and your character taking aim—you simply point and click to kill. Combined with the gravity mechanics and the staggering variety of (incredibly unique) weapons, each fight brings a new experience that will leave your blood pumping. During my matches with the developers, I was able to test out all of the weapons, and they are all just ridiculously fun to use. A few of the weapons include:

Added to these weapons are your mech abilities, which include a directional shield, deployable mines and turrets, and a booster to help you move around the map with more efficiency. I used the shield constantly, and it was such a joy to block a discharger bolt with perfect timing, and strike back with a blast from the flak cannon. It’s these kind of exchanges that kept me coming back for more. 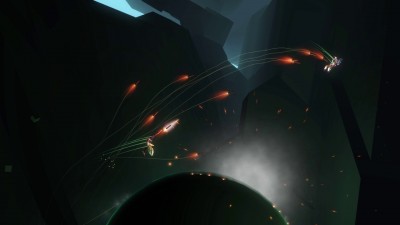 There are two gametypes in Orbital Gear. Obviously you have a classic deathmatch mode, however the developers are waiting for the right audience before launching a team deathmatch. There is also a mode called “Orbital Warfare.” I was skeptical of this mode at first, but after playing around with the devs in it, it is actually incredibly fun. Each team has a superweapon that can be charged by killing enemies and collecting their dropped energy nodes (which also return health and ammo) and returning them to their base – once at 100%, the weapon fires and victory is won. You can also win by destroying the buildings at the other team’s base. This mode is where the game truly shines, giving each team clear offensive and defensive fronts, and making for a very interesting match.

There are very few faults that I can find in Orbital Gear, but the one that is there currently is rather glaring: the game is multiplayer only. The multiplayer may be the only thing worth playing in this type of game, but without the right amount of exposure, an indie game often does not get the community following that it needs to have even a single game in progress. It is entirely likely that after purchasing this game, you will find that there are only a handful of players – if any – playing at a given time. I truly hope that this is not the case in this particular instance, because what Orbital Gear does, it does masterfully, but the audience simply may not be there. That’s the risk you take when making a multiplayer-only game as an independent developer. The developer has expressed interest in adding bots and a single-player experience, but it’s just not quite the same. At the time of writing, the game looks pretty lively, with several game sessions and a decent amount of players, but these things tend to fall off rapidly.

Regardless, if you are looking for a game that really gets your blood pumping with unique style and gameplay, Orbital Gear is for you. Just don’t be surprised when a few weeks after release, you don’t have anyone else to play with.