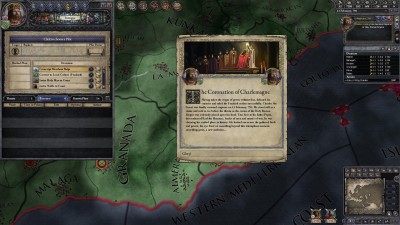 When Crusader Kings II first came out in the fall of 2012, the campaign noticeably began on the benchmark year of 1066, the year when Duke William the Bastard of Normandy crossed the English Channel, conquered England, and became King William I “the Conqueror.” Conspicuously absent from the game was one of the most influential figures in the early Middle Ages, who also became the father of France and Germany and became the first emperor in western Europe since the fall of the Western Roman Empire, and that man was Charlemagne.

Crusader Kings II: Charlemagne, along with the free Patch 2.2, is the latest of seven major DLC expansions, providing a series of new features to the main game, including new gameplay mechanics as well as a new campaign benchmark start year of 769. One of the additions immediately worth mentioning is a more interactive sandbox learning tutorial that combines many of the elements from the game’s original tutorial into an actual tutorial scenario that provides new players with a more immersive and executable learning experience than just simply reading massive amounts of information.

As the DLC title suggests, the new campaign has a more historical focus on the rise of Charlemagne and the creation of the Holy Roman Empire in the late 700s. Although the campaign centers on Charlemagne, players are still able to play as his rivals and are not by any means constrained. However, for players looking to get a more historical storyline experience, the expansion provides many unique narrative events pertaining to Charlemagne for those that want to play as him, but at the same time, the game does not force players to make historically accurate choices, keeping to the sandbox nature of the game. A chronicles text was also added which tells the history of your dynasty as the campaign progresses. 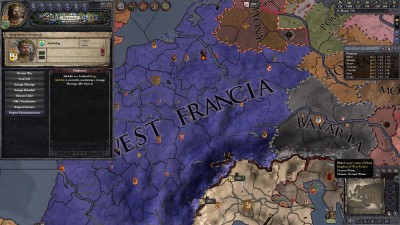 Several new major gameplay mechanics have also been introduced with Patch 2.2. The first one of note is a new vassal limit system, which works similarly to the demesne limit. This mechanic really forces players to slow down expansion and to make sure to delegate power to vassals to keep from exceeding the vassal limit, which could mean penalties in the amount of troops that vassals would contribute to the realm, hindering further conquests. To complement this new feature, the ability to create minor kingdoms as well as empires in addition to duchies allows for more decentralization of power to vassals as well as preventing players from creating massive blobs very quickly. Although the game also added centralization laws, which allow players to expand direct control, the amount is very minor. Bottom line is that the new mechanics force players to essentially devolve and share power and to strategize more on how it is shared, making the game more restrictive unlike before.

The patch also provided tweaks to pagan ruler mechanics by including tribal holdings, which are buildings built by prestige rather than money. Also, vassals act as independent allies and have to be invited to join wars and do not automatically contribute levies upon request in contrast to Christian feudal kingdoms. Pagan succession also received an overhaul with the addition of Elective Gavelkind, which is perhaps one of the most complex succession laws in the game; titles are essentially divided up between your primary heir—who is elected by members the dynasty—and your other children, which could mean the collapse and division of an entire kingdom.

Within the diplomacy feature, Patch 2.2 also eliminated Assassination of characters as an option and made it exclusively in the Plots where you would need the support of other characters in order to generate the necessary plot power to execute an assassination plot. This is a disappointing omission from the game as it takes away some of the RPG-esque direct action feel from the game.

Overall, Charlemagne and the corresponding Patch 2.2 have made Crusader Kings II feel like a new game with new features that expand on the main aspects of the game. The addition of an extra century of campaign playtime is always a welcome plus. Albeit, there have been some bugs that were encountered, mainly regarding some AI behavior such as the occasional stray allied army that refuses to merge with your larger army as well as occasionally not being able to cancel certain plots. Bugs aside (an inevitable patch is already in beta), this is definitely a worthwhile add-on to the main game.