Most of us are familiar with hack and slash games. I’d be willing to bet that most of us are also familiar with anime and how most of them have at least one overly sexualized female character with exaggerated proportions. I never thought I would see a game that combined these two completely unrelated things, but here it is: Senran Kagura Shinovi Versus. 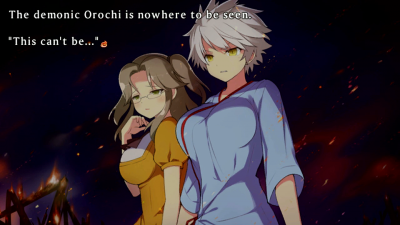 How most of the story is told, but usually with less boobs.

I wasn’t quite sure what I was getting myself into when downloading this title, but when I saw that the icon for the game was just a pair of boobs I knew it was going to be interesting to say the least. The closest thing I can compare Versus to is Dynasty Warriors. You face off against groups of weak enemies or one to three “boss” type enemies using combinations of light, heavy and special attacks to take them down. The only difference in Versus is the characters’ clothes falling off when they get hit, but more on that later.

Versus revolves around four shinobi schools and their interactions with each other. Two schools are good and two are evil, which means they cross paths often and fight. Surprisingly, the characters are all fleshed out (no pun intended) and each one has a different personality and struggle. Unfortunately the overarching story doesn’t have much substance. It’s mostly told through cut-scenes where characters are just standing around, or by walls of text in front of drab backgrounds. On the bright side, all 20 playable characters have their own side stories which are short, but engaging because of the non-stop action.

Speaking of action, I was pleasantly surprised by the actual gameplay. Versus is mission based and missions usually involve fighting a few hordes of standard enemies and then one of the other shinobi girls. The standard combinations of light and heavy attacks are used, and as you attack a meter that allows you to perform powerful special attacks fills up. Each character is different and it is genuinely fun to figure out the best way to fight with each one. 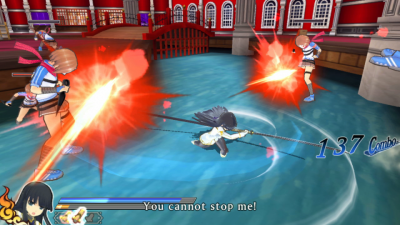 The unique aspects of this game are the air attacks and the forms the characters can take. When you knock a character into the air you can dash after them DBZ style and continue your combo. You can even chain these air attacks together and have some pretty epic battles without touching the ground.

Each character has three different forms. You start out pretty basic, but at any time you can transform into your shinobi form which gives you a boost in your stats and access to your special moves. The last and most revealing form strips your character down to her skivvies (because fan service) and gives you a huge boost in attack while sacrificing defense. All of these forms can be very useful in certain situations, but at times they do feel overpowered against boss characters.

There is one other aspect to Versus that tends to overshadow the gameplay. The fan service is so off the wall it gets comical at times. Here are some examples of what this game has to offer:

I’m no prude, but is this something you really want in a handheld game that is meant to be played on the go? Personally, I always chose to play this in the safety of my own home. 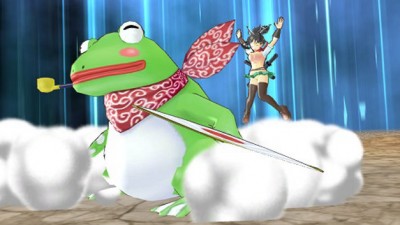 Special attacks are unique and some are very interesting.

Versus boasts a lot of content. In addition to the story and side missions you can jump online for competitive multiplayer for up to four players. There are also crazy amounts of items to buy with the money you earn in the game. Most of them are different clothes for the characters, music tracks and things like that, but if you like to 100% finish your games you will be here for a while.

Versus doesn’t offer the best graphics the Vita can put out, but it doesn’t look bad by any means. All of the characters have their own style and you fight in a decent number of stages. The fighting almost always looks flashy and the special moves are fun to watch. On the downside, there are times when the frame rate drops drastically, usually when a lot of enemies are on screen.

The soundtrack has some catchy tunes, but nothing you’re going to want to seek out after you’re finished playing. The voice acting is entirely in Japanese, but each character sounds like a different personality. On the battlefield things start to sound pretty sexual, especially when the characters get hit, but I guess that’s just the nature of the game.

If you can get past the over the top fan service and the dull story you will find a fun and engaging hack and slash game. Versus goes a little deeper than other games in the genre by offering up air combat and multiple changeable forms. If you like games like Dynasty Warriors, you will find something to enjoy here. While I can’t recommend a purchase at full price, keep an eye out for a sale or price drop.