If you think Flyhunter Origins resembles movies like A Bug’s Life it’s because the development company is composed of past and present Pixar employees. That company is called Steel Wool Games and Flyhunter is their debut title. After being on the mobile market for a couple weeks Flyhunter has made its way to the Vita as a budget downloadable title, but can it stand out against the plethora of indie titles already out there? 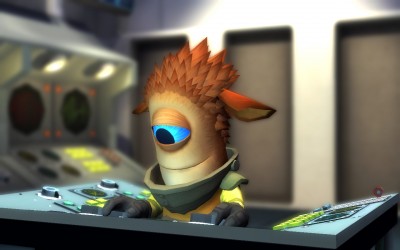 Flyhunter is a basic platformer aimed at a younger audience. You play as Zak, a bumbling, one-eyed, janitor on an alien ship who suddenly finds his life turned upside-down after accidentally ejecting the ship’s crew and cargo full of precious insects. Since he is now the highest ranking crew member on the ship it is up to him to get the flies back. The story is straightforward, but it is funny and overall enjoyable.

You will quickly realize that this alien race is much smaller than humans. Everything from beetles to frogs to venus fly traps pose a threat to Zak, but he is not defenseless. He has what appears to be a lightsaber/flyswatter combo and a stun gun. The platforming is simple and works for the most part, but there are a few hiccups every now and then. Usually the problem is determining if something is a platform, or a hazard. This isn’t a huge issue because of the forgiving checkpoint system, but there were a few times where a thorny branch was blended into the place I was trying to jump to. 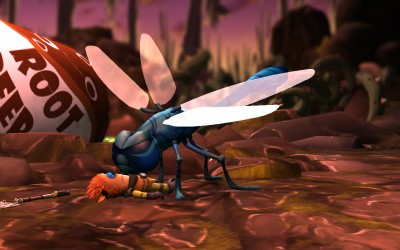 One of the “flies” you will come across

The combat mostly boils down to stunning enemies and swatting them. It’s easy to master, but that’s not a bad thing considering the target audience. There are a good amount of different enemies and most of them are unique in the way they attack. You can also upgrade your weapons with insect eggs you find throughout the levels, but the upgrades are so cheap you will be done halfway through the game, and collecting the eggs after that becomes pointless.

The last aspect of the gameplay deals with the flies you have to track down. At the end of every chapter there’s a different bug, and you suddenly go from a platformer to a flying game akin to Star Fox while you chase them down. When you catch up to the fly you swat it a few times, it flies away, and then you repeat the process until its health is depleted. These sections are a bit of a letdown because it took me about 30 seconds per battle and there is no variation between the different flies.

While the game itself is a passable platformer, its biggest downfall is the frame rate. The entire game was always a little bit choppy and never ran quite right. I doubt if it is utilizing the Vita’s capabilities, so it’s disappointing to see these technical issues. 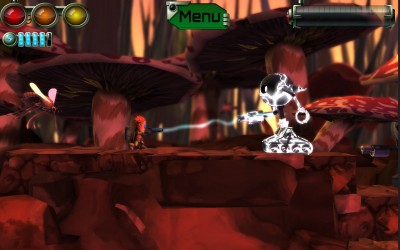 On the bright side, the character and level designs are where the creativity flows. The aliens are charming and the levels have a lot of cool little touches. For example, you don’t just jump on the same old leaves and branches to progress. There are pitcher plants, garden gnomes, and even some underground segments. Also, the background frogs being a hazard are a nice touch. Just don’t walk in front of them.

The audio, while not bad, isn’t very memorable. The soundtrack consists of a few songs that are repeated often, but for such a short game I can understand wanting to focus resources elsewhere.

Flyhunter Origins isn’t a bad platformer by any means, but it doesn’t do anything other games haven’t previously done better. At the end of the day, the fun main character can only do so much to combat the abundant framerate issues in this game. While I can’t recommend Flyhunter, I’m looking forward to seeing what Steel Wool Games’ comes up with next.