Lost Dimension makes the worst first impression of any game I’ve ever played.

The PlayStation 3/Vita tactical-RPG from developer Lancarse via publisher Atlus begins with an incomprehensible, stilted anime cutscene.  An impending apocalypse, a group of frightened leaders, the sudden appearance of an evil-looking tower, and the recruitment of a group of psychically-gifted anime stereotypes to infiltrate and destroy it on a timeline. All that in just a few minutes of scared-looking anime faces delivering tortured exposition, and still only about half as clearly as I have just written it. The first few, slow hours don’t do the game any favors either. But what comes after this nose-breaking stumble out of the gate – against all apparent odds – is one of the most tactically satisfying games I’ve played on the Vita. 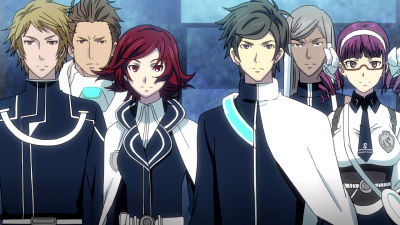 Lost Dimension starts out making zero sense, only to dive head-first into the worst kind of bland, narrative oatmeal. The main thrust of the story is delivered in narrative text boxes between character portraits. Progress is measured by your ascent through the aforementioned foreboding tower, with vague promises to reveal more intrigue after rung is completed.

The threat of having multiple traitors in your party, introduced right after the tutorial, is an interesting idea: making talking to your fellow SEALED members (the acronym is never explained in any capacity I could manage to be interested in) an in-progress mystery. It works in theory, if not in practice. Being a purely story-based conceit was a particular mistake. On occasion, finding the traitor also requires slogging through a devastatingly pointless mini-game of running toward a suspect in the void of their mind.

The actual plot to Dimension is minimal, and given its script and translation, that is most certainly for the best. Without fear of hyperbole I can say that 90% of the narrative consists of being directly told by the cast why each of them are apprehensive – in this and a hundred other different, equally anxious moments – at any given time. The main villain, called The End, because Anime, throws in a few extended cameos in each chapter to pompously effuse about emotional conflicts made tangible and his hatred for the protagonist, and then you kill one of your party to move upward to the next floor. Rise, repeat five times, roll credits.

You can’t even experience the full story in a single playthrough. Getting a relationship with all of your SEED co-patriots – an impossibility the first time around – is bluntly stated as a requirement for the “true” ending. The one you just watched is a hackneyed sneeze of a conclusion, where the protagonist openly wonders about how he is missing the bigger picture. Not often a game straight up mocks you for your expectations.

What little nuggets of interest nestled deep in a subterranean, forgotten layer of Dimension’s story are marred by the decision to make each traitor randomized. A mechanically sound concept, giving you the additional challenge of having to paste the skills of a lost comrade onto a different party member and incorporate the change into your tactics. But in narrative practice, you wind up with interchangeable sob stories delivered in vague soliloquies with each death. No character has a strong reason or secret motif to betray you, because everyone is designed to possible betray you at any moment, depending on the playthrough.

If I were a betting man, I’d have a few chips on the theory that Dimension was an empty, faceless tactical playground up until the last stretch of development. Then, and only then, were the trappings of a story farted out to tie everything together. This, for reasons above, can be a thing of fetid boredom. But that’s why the good gaming gods invented the “Skip” button. And when using that most splendid creation, you quickly see why it was good the developers may have focused where they did. 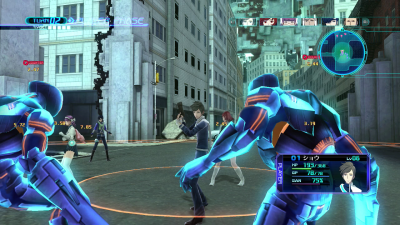 A thin majority of your time in the Tower of Generic End-of-the-World Badness is spent in battleground plots, trading damage counters with an ensemble of mechanically-inclined enemies. Each of your anime crew has a suite of skills ranging from the direct and powerful to the teleporting and sneaky. Movement is limited to a sphere of mobility exhausted at the start of each character’s turn, after which you can select a straightforward attack, or use a combination of your magic (or Gift Power) and psychic (or Sanity) bars to deliver anything from a rather exhaustive web of abilities. Some may specialize in low-damage status effects, others may utilize elemental damage for strong but unrepentant area-of-effect damage, and others are best relegated to supporting your front line with buffs and healing.

Sanity plays a unique role in the Tower of Infinite-And-Erroneous-Exposition. Depleting a character’s mental health meter does not kill them, rather sending them into a berserk state where they do extremely high damage to anyone in their path. A potentially useful state, if you don’t mind the hit it takes to your battle grade, but a potentially compounded risk. It did not factor into much of my playthrough, but I could see a more savvy general than I could sacrifice the sanity of one of their party for some serious devastation.

Upgrading each of your party’s skills and equipment is a lengthy but rewarding endeavor. While new weapons tend to become available in straight line of damage increases, accessories and barrier armor can offer multiple kinds of protection. When paired to fill in the gaps of each SEALED member’s stat sheet, it can be immensely satisfying to watch the improvement of your squad from battle-to-battle. But all that careful preparation does not negate the importance of on-field strategy. Unlike in many other tactical-RPGs, items like grenades can be devastating, cutting through your and your enemies’ defenses like cheese-paper. 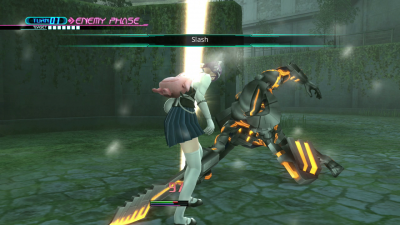 There is nothing truly new or revolutionary about the suite of skills and effects at your disposal (fire burns, poison sucks out damage), but the tide of battle can still turn at any moment. Your placement in relation to your target dramatically alters your effectiveness, and there are no useless abilities or buffs. Each of your character’s stats carry weighty significance, and the management off and on the field is the key to survival. Lost Dimension is not outright difficult, but it certainly has no trouble disintegrating any front-facing assaults. And outside of some annoying movement issues around corners and enemy AI fond of getting stuck behind their fellow units, the controls maintain an excellent standard of reliability throughout.

Dimension aspires for a solid foundation rather than a brain-melting complex and/or accurate simulation of warfare. Where it fails in this ambition is largely negligible, with far too generous accuracy percentages being the most reoccurring annoyance. I missed more 80% to hit shots here than in all other games I’ve played combined.

On the scale of enjoyable interactive chess battles, Lost Dimension is just beneath the XCOM/Valkyria Chronicles grade. Fights here don’t carry a very widespread amount of battle conditions or objectives – side damage, elemental weaknesses, and ground levels aren’t taken into account – but what is here is utilized fully, and mechanically smooth. An initial first act tutorial hump gives way to a steadily increasing addictive quality. It is not the most muscular of tactical-RPGs, but it knows how to flaunt what it’s got. 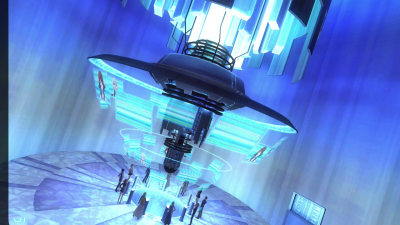 The PlayStation Vita promises console-quality experiences on a small screen, a PlayStation Portable inheritance. Lost Dimension is a superb reason on why such a promise is a faulty one. Each battle in the Tower of Limp-Apocalyptic-Promises lasts between 10 and 40 minutes, in between offering an equal (if not greater) amount of time surfing through upgrade charts and equipment menus. The latter is reinforced by a rather brisk leveling system that sees at least one of your party having the possibility for advancing after each encounter.

Battlefields feel a little vacant, even on the smaller screen version of the game, with only a sparse smattering of objects and effects scattered in each arena. Despite shifts in color palette and greenery, the focus of the fight tended to blend everything into a background of vague boxes in my memory. And the in-environment dialogue interactions, rare as they are, look like cheap puppetry. Speaking to your foes and friends outside each arena is a much crisper, cleaner affair, with pristine anime stills minimally animated and rotated for emphasis. Enemy variety is where the art design most impresses, with a large amount of detail and attention paid to each variant model.

And it is all perfectly timed and structured for a train ride or doctor’s appointment. Short bursts of compelling action effectively packaged tightly into bite-sized chunks. The story, if you can stand the flavorless chicken stock, shows up in routine sections of each stage, and you only need speak to characters you’d like to between fights. If you have more time, you’ll likely want to use it. But for those on a schedule, there is finally a handheld experience that plays like the format it is on, not the one in the living room. And at an average playtime of 20-30 hours, these tiny battles add up to a serious investment. 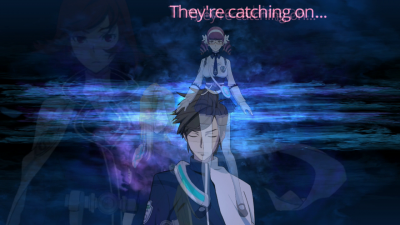 You are thoroughly encourage to outright ignore Lost Dimension’s story. This is a first recommendation of the kind for me, but take it as the opinion of a dedicated anime-lover and RPG-nut. If you ignore the sorry excuse for a set-up and the emotional white noise that makes up Lost Dimension’s talking bits, what you are left with is a strategically nourishing experience expertly designed for portable play.

Just seriously, use the “skip” button when people start talking.

This game was played for review on PlayStation Vita, with a developer-provided code.