It’s no secret that I am a sucker for hack and slash games. Generally it is fun and cathartic to turn off your brain  and decimate hundreds of foot soldiers, zombies, or what have you. Onechanbara ZII (Z2) Chaos is the third game in the Onechanbara series that debuted on the Playstation 2 in Japan. Known in the US as the “Bikini Samurai Squad” and the “Bikini Zombie Slayers”, Chaos makes its way to the West on the PS4 to give us more of these scantily clad, corpse fighting ladies whether we want them or not. 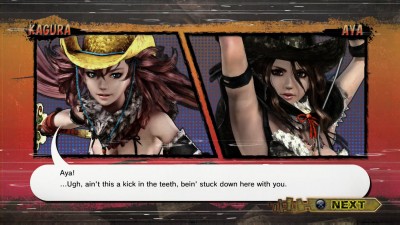 Chaos revolves around four professional zombie killers from two rival clans who come together to destroy a common evil. The story is mainly told through comic book style frames with the occasional cut-scene. Overall, it is lackluster at best, and hard to follow at its worst. You’re basically traveling across the world fighting zombies while trying to find the person who wants to turn Earth into an undead wasteland. There never really seems to be any motivation for this, but given the over the top nature of the game that doesn’t really surprise me. Evil is as evil does.

Chaos is a hack and slash through and through. Similar to Dynasty Warriors, players will make their way through mostly linear levels battling hordes of zombies with swords, fists and even chainsaws. You have your standard light, heavy and special attacks along with a pretty extensive combo list that tries its best to spice up the gameplay.  As you progress through the levels you are presented with waves of enemies to fight until the game lets you continue on to the next area. The more efficiently you kill these enemies the more money you will receive to buy things like weapons and additional combos. 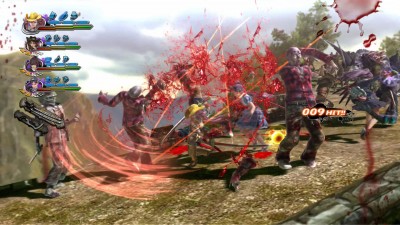 This is all pretty standard fare, so Chaos throws in some extras to try and keep things fresh. By far the most useful mechanic is the “chase” feature. This lets you shoot through the air towards an enemy and unleash a long combo. This proved especially useful on bosses when I figured out that you could switch between the girls mid-chase and chain combos together until the boss decides to move out of the way. The only time I really stopped chasing was when my weapon was too bloody and had to shake it off to keep doing massive damage. A bloody sword is an ineffective sword.

You also have “Cool” combos which are achieved by timing your button presses correctly. When I went to practice them in the tutorial I found that every single hit in a combo has different timing and it seems like it takes a lot of time and effort to memorize specific timings for 12 hit combos for four different girls who all wield two different weapons. I understand that people want some sort of challenge, but the only way to master these combos is by chance or painstakingly repeating them in the practice mode. Some sort of weapon glow or other on screen indicator would have been great for these, but in the end I just went back to the chase move. 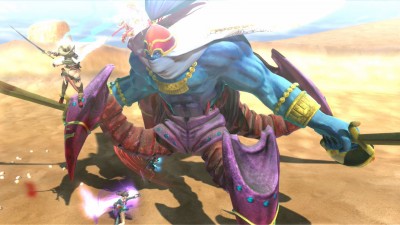 The rest of the features are pretty common among action games. You can switch between the girls at will and the characters you aren’t using will slowly regain health. If you’re in a tight spot you can summon the other girls to fight alongside you, which can be pretty cool. Each character also eventually gets a crazy overpowered transformation move that seems to last as long as you want it to. Your health is supposed to steadily decrease while you’re in that mode, but I never really noticed it. Lastly, the QTEs in the game utilize the touchpad, and they are actually entertaining.

If you’re a completionist, Chaos will keep you busy for a while. The main campaign is really short, but after you beat it you can play it again on higher difficulties, or tackle the mission mode which only lets you kill zombies in specific ways. There are also a lot of unlockables that usually come in the form of skimpy clothing to take to the dressing room *ahem* character customization screen.

When it comes to visuals, Chaos doesn’t really impress. The characters are all super over the top and flashy, but even though it looks like the developers tried to put life into the environment it all comes up flat. Everything basically boils down to running down a hallway, killing zombies in an open area and going through a door to what looks like the same room you were just in. The positive thing is I never noticed any lag, and that’s pretty impressive given the number of enemies on the screen at once.

The best part about this game is the soundtrack. The music is just as over the top as the premise with fast paced guitar riffs along with some really atmospheric ambience tracks. The voice acting is hit or miss. Sometimes it sounds well done, but at other times it sounds like the actors are reading it directly from the script for the first time.

Despite its crazy premise and energetic music, Onechanbara ZII Chaos never hit the right hack and slash notes for me. The story never kept me interested in seeing what happens next and I never really found a practical use for the extensive combo list since the chase move was the key to getting things done fast. If you’re a hack and slash fan there are better options out there, and if you’re looking for something with sex appeal the Internet is at your fingertips.