I’d like to start this video off by saying that, like many geeks my age, I am a gigantic Star Wars fan. I grew up worshiping the original trilogy and up until I was about 21 I read as many books and comics and video game from the expanded universe as I possibly could.

I’m also a long-running fan of the Battlefield series though I’m not the best at multiplayer shooters. But there’s nothing better than getting together with a bunch of friends from across the world catching up and shooting the breeze… and your enemies on a Friday night.

My first impressions of the Star Wars Battlefront beta were not that great. Aside from the graphics and sound–which are likely the best we’ll see from any game this year–the gameplay ranged from “really nice” to “totally disappointed.” After my first few rounds, I felt like I had my fill of the game, but like a good little internet critic, I stuck with it and played it as much as possible over the weekend to give a fair shake. My experience with Battlefront is a stark contrast to most of my Battlefield experiences where my first thought was always “oh, I’m going to be playing this for a while.”

Starting with the “really nice” I’ll say that the standard infantry combat, that is to say, the running and shooting your base weapons, feels pretty good. The guns sound awesome. Look perfect. Give a nice kick, and their extended blaster travel time adds a nice mix of shooting gameplay when compared to other shooters with much faster bullet travel times.

A case could certainly be made when discussing the amount of guns that are available to the players, but it’s important to remember that this is just a beta, and DICE has likely left a good number of them for the full release. Guns like Han Solo’s and Luke Skywalker’s sidearms are missing. Scout troopers and imperial officers also had some really cool pistols.

Despite the fever pitch anticipation surrounding this game, it is, at its core, a licensed game that is intentionally released at a specific time to get people excited about the upcoming film. It’s a $60 commercial that also happens to earn revenue on its own. The film is also going to drive more casual gamers (and I’m not using that term in a pejorative form) to go to their PCs and consoles and look for the latest and greatest Star Wars game. This will be their go-to game. With that in mind, DICE is definitely catering to a less hardcore crowd. Battlefront will never be a game seen in competitive world.

Is that a bad thing? Definitely not. But when sliding their scale from “challenging” to “approachable” I think DICE moved the scale a little too far in a lot of cases.

For starters, traditional Battlefield games have classes. Assault, support, sniper (or recon), and engineer. Yes, I know this isn’t a Battlefield game, but Battlefront has no classes. Everyone is the same, except for a customization of “cards” allowing players to equip different grenades or powerups for your blasters. Nothing really game changing. Despite what someone is holding, the playing field is relatively level. There’s even a sort of sniper rifle option that requires a rather lengthy cooldown time between sniper shots, that prevents games from being crowded sniper matches. It’s smart. 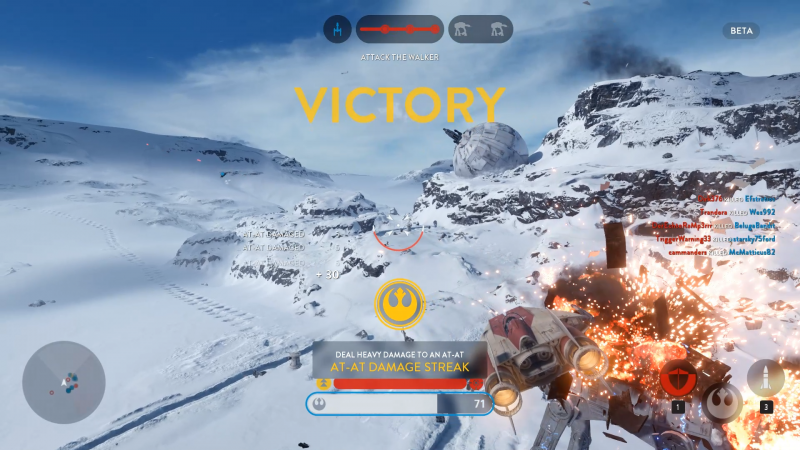 Sniper vs. sniper gameplay has its place, but I personally don’t think it fits in the Star Wars galaxy and removing the option to have a sniper class really does make it more welcoming to newer and less hardcore players.

However, removing the other classes, does not. Again, speaking from the point of view of someone who still loves multiplayer shooters but isn’t very skilled at them, I greatly miss these three other classes. Those classes gave me things to do that were still helpful for my team’s overall success. Though my aim is horrible, I can still repair tanks, heal teammates, resupply them with ammunition. And though I can’t headshot someone who is jumping through the air, I can certainly nail the broadside of a slower moving vehicle.

What’s left is a twitchier mode of gameplay that lacks variety in some areas.

But moving back to the game’s problems as they currently exist.

Spawns in the game are absolutely atrocious. You’ll appear in the most vulnerable places and there are already players who have memorized the terrible spawn spots and exploit them.

The game will not have server browsers, which I don’t mind as much, but what saddens me most about this is the fact it means there won’t be alternative modes of gameplay provided by the developer. There is no chance of a hardcore mode where infantry aren’t bullet sponges for one another, and there’s no toggling friendly fire. I personally prefer a hardcore mode. It prevents an all too common situation for me where I could get the jump on someone, shoot them several times in the back, just to have them turn around and one-shot me in the face.

Vehicle gameplay is almost all-around disappointing, especially on PC which is really weird coming from DICE. While aiming with an AT-ST or an AT-AT walker, your rounds don’t go anywhere near where the reticle is pointing. And it’s really sad there’s no first person point of view for the them. I want to play from the cockpit of the walkers.

The controls for flying the ships are just a mess. Either your mouse is entirely too sensitive or not nearly sensitive enough which results in you rocking your mouse over and over again just to be able to make a tight turn and not die immediately.

Speaking of dying immediately. When you first spawn as a ship, you fly in a straight line for a solid 3 to 5 seconds without being able to maneuver or return fire, but during that time, you can take damage. I have been shot down and have shot down other players during this time of absolute vulnerability. Ship spawns need to be redone.

The game needs bots. Badly. For a few reasons, too. For starters, the Battle of Hoth’s environment looks outstanding. Simply stunning. But it’s also a giant open snowfield. Even on a full server it can look pretty empty vs. the crowded battlefield of the film. Bots are great for not only adding much needed flair, but again, they cater better to less hardcore players. You might not be amazing at killing human controlled characters, but taking down a few bots lets players feel helpful without having the experience feel too “dumbed down” for the people who take the game more seriously.

There are powerups on the field that infantry can pick up. They can be vehicles, hero units, or specialized grenades, shields, or even calling in orbital strikes. At first, I didn’t like the idea of random drops, but the more I thought about it, the concept grew on me. In some shooters, the game rewards players who are on a killing spree, giving them ridiculous powers to extend their reign of terror. This levels the playing field. Anyone can be the hero. Anyone can pilot ships or vehicles. Anyone can call in the decimating drops and you don’t have to be a reflex player to be able to enjoy it.

I am honestly stunned, absolutely stunned by two omissions from this game. The first: there’s no single player story. For a Star Wars game, I think this is the greatest missed opportunity. Obviously, they’d need two small campaigns, a rebel one and an imperial one. The survival mode presented in here simply doesn’t cut it. At all. One playthrough of that and you’ll be done and you’ll never feel the urge to replay it.

And second, there is no Battlefield 2142-inspired Titan mode. Two gigantic capital ships in the sky raining death down below. Ground troops fighting over control points while mech walkers duke it out against aerial fighters, topped off with a climactic conclusion in narrow corridors trying to destroy the a capital ship from within. That is what I expect from a Star Wars game from DICE, especially since they created 2142 almost 10 years ago.

Finally, a good number of people will leave in a few weeks after launch. It’s the typical cycle of modern first person shooters. However, there is a chance that a devout crowd may stick around with this simply because of the Star Wars name.

It is nice DICE let people try out a Beta this extensive. People got figure out on their own if they REALLY want to buy the game or if their machines can run it. Personally, the things that disappoint me about Battlefront outweigh the things that impress me. The sound and graphics are amazing. As a Star Wars fan, it’s really wonderful to explore the world in such an immersive way. But as a gamer, there’s too much wrong with Battlefront that goes beyond what can be fixed with a simple patch. From where I stand, this looks like a cash-in on a hot licensed franchise. It’s a super polished and gorgeous cash-in, but after my free weekend with the game, I don’t feel the need to go back to my favorite galaxy far, far away. Not at full price, anyway. I don’t expect a Star Wars Battlefield game, but I do want a game that is built on the lessons learned from the dozens of games that came before it.