If you’ve been anxious for a vacation where you can kick back with a bottle of whiskey on a lonely beach and watch some boat explode off on the horizon, Just Cause 3 can’t really help you get there, but you can watch someone else live that reality. Over and over again. And again. Every time you start the game, you get to watch this unskippable and unbearably long splash screen. The first time I saw it, I laughed and thought to myself “wow! What an original and funny way to show off the company logos before the game.” And every time I watched it thereafter it just made me more and more frustrated. And once the wait for this super long intro is finally over, I had to wait more while the game took an unnaturally long time to log into its servers. That only leads to the question of “why do you have to log into servers if you aren’t playing a multiplayer portion of a game?” Good question.

And then after that wait is over, you have to wait even more for the game to go through it’s primary load sequence. On my PC, after having it installed on an SSD, that entire sequence takes one minute and forty seconds.

Odd for me to start off my review with a complaint about wait times, right? Well, first impressions are often the strongest, and this is Just Cause 3’s first impression.

Once you’re finally in the game, Just Cause 3 is a lot like Just Cause 2. That’s not a terrible thing. You play as Rico Rodriguez and zip and fly around a chain of islands using your infinite parachute, a retractable tether strapped to your wrist, a wing suit, and a whole lot of guns. It’s your job to basically blow up anything red. It’s an open world, so how you do it is up to you.

There is a really really weak story about a rebellion being partially led by your childhood buddy Mario (which of course, they couldn’t hold back from an “it’s me, Mario!” joke within the first 10 minutes).

That’s not me knocking the story, either. What I’m trying to say is, Just Cause 3 is mindless. Go here however you want, destroy, go there, destroy. The word “destroy” appears on screen pretty often as though you forgot. Oh! That’s what I do in this game? But I think sometimes all you need for a video game right? Just… mindless fun activities. Flying, jumping, blowing stuff up and in the meantime, make it as pretty as possible. I don’t always need the brooding backstory of some unidentifiable anti-hero.

Aside from the fragile story, the open world gameplay boils down to eliminating key infrastructure from a malevolent dictatorship called DRM. Har dee har har.

When you free cities or destroy military bases, you add more vehicles and weapons to your potential library of instantly available items. It’s an interesting idea, but I never really used the system of calling in for my free gear much. Most of my 27 hours with the game, I just kept going and played with whatever I could find. Because, 1. It’s not like grenades or rocket launchers are hard to come by here, and 2. why drive any car or fly most slow planes or jets when I can essentially fly.

Well maybe not fly, but glide a really really long time. You can cover infinite distance by simply opening your parachute, and then your wingsuit, and repeat the process. And thanks to the game’s extremely liberal physics system you can grapnel the ground and pull yourself toward it while using your wingsuit to cause tension and increase thrust and lift. It’s insanity, but fun insanity. You could do something similar in Just Cause 2 with the parachute, but with the wingsuit you move much, much faster. When you get good at the system, you can even use it to climb mountains. 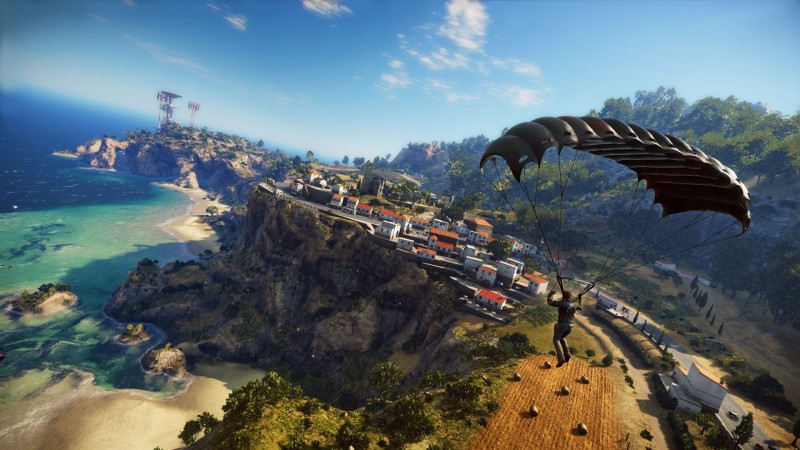 You can withstand a ridiculous amount of punishment before dying. Essentially Rico is a comic book super hero. It’s a game of Reverse Spider-man and the Adventures of the Exploding Red Buildings. You’re not swinging down. You’re swinging up. And instead of wearing a cool super suit, the main character sports enough denim to make Chuck Norris jealous. That part’s not a compliment. This new Rico looks like an idiot, and he sounds like everything sexually excites him, not in suave over-amorous kind of James Bond way, but in a “I have serious suspicions about my creepy neighbor” kind of way.

Aside from mindless destruction, there are also a few races and stunt challenges that, when completed skillfully, can unlock what the game calls “mods.” The mods change the way your weapons and equipment behaves. You can make your grenades explode the instant they touch something. You can add functionality to your flight suit by giving them air brakes. You can increase the strength of your tethers. None of this is mandatory, but it does help in making the game more customizable to your unique preferences.

The game world is gigantic. Absolutely enormous. There are islands that are heavily inhabited, and others without any life at all. White it’s neat to climb to the highest point in this little world once, beyond that, much of this space feels like… just dead space. It adds some nice aesthetics, but it mostly feels like wasted potential. There’s some wildlife. A deer or fish here and there, but most of the world here feels barren.

When you’ve wrapped up the game’s main storyline, there is a nice option to continue playing and retain all your unlocks and re-oppress the cities and bases alike through the map menu, so you can keep blowing stuff up… forever. That will keep people playing for while, but for me, once was enough. I might take a look at the game again if and when the cooperative feature comes into play.

But getting back to the DRM. The digital rights management. Not the game’s oppressive regime. It has, more than once, completely broken up the flow of my gameplay. I would be enjoying some bombastic activities like flying helicopters into radar dishes and jumping out at the last second. Hooking people up to helicopters while hanging upside down. Dashing from one jet to another and throwing their pilots out hundreds of feet above ground just to have everything stopped by trying to log into the game’s servers. There IS an offline mode, but the game doesn’t like to stay in offline mode. And it’s not even something you can set up in an option before fully launching the game. It is distracting and annoying and it kept me out of playing the game for several minutes at a time.

I played the game on PC and saw OK performance, but I’m apparently lucky. The developers publicly came forward and addressed several known issues and they’re promised to be working on a patch for the near future. So keep your eyes open for a change log.

It’s hard to recommend Just Cause 3 at full price. The weird DRM servers that are masked as competitive gameplay elements are a hindrance. I truly don’t care who has bested me in any of the game’s activities. But at the same time it IS a fun game. There’s no denying that. I don’t have to worry about names or places series of events. I just fly, or drive, or shoot, or swim, or glide and that feels good. But, like many people, my first experience with Just Cause 2 was after catching it on sale through Steam. I probably paid no more than $10 for it and it was worth every penny. Just Cause 3 doesn’t feel like a big enough change to justify that remaining $50. On sale, yeah, I’d say go for it. Maybe I’m being cheap, but $60 seems a little much for this one.