It seems I have a higher tolerance for horror than most people. I’ve been often criticized when saying certain games aren’t scary while others have been terrified.

Layers of Fear scared me. I think it’s a great horror title. It is NOT survival horror. If anything, I’d call it a haunted house simulator. You scoot from room to room in this Victorian-era mansion, embodying an artist tormented by his struggle for inspiration along with a few other things.

In the same vein as horror games from Frictional, you dig around through drawers and cabinets to find scraps of information like notes and photographs and newspaper clippings. Who you are, how you have treated the world and how the world treats you is front and center for the story as you delve deeper and deeper into the mind of this artist. And as you venture down the rabbit hole into madness, the house twists and perverts itself into your living nightmares. The only thing that can stop the madness is finding the six sources of inspiration and finishing your masterpiece.

There is no combat in Layers of Fear, and there is no death, but I would definitely say there is a failstate which feels worse than death in this game. 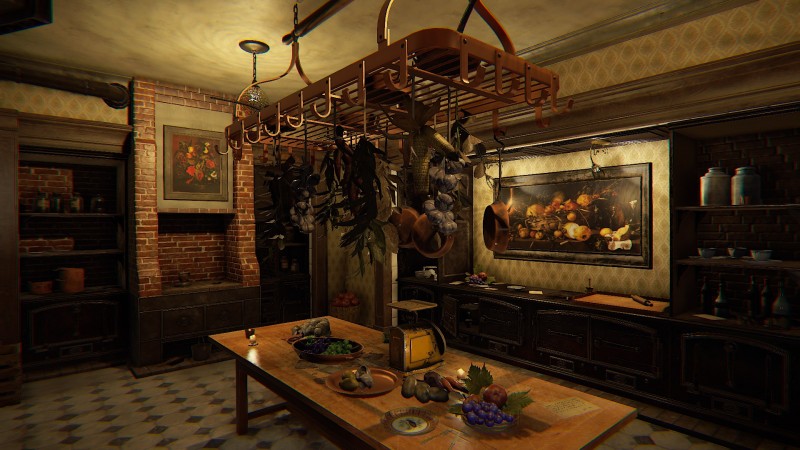 The textures and environments are stunning in Layers of Fear.

More often than not, players are given a simple choice: left or right. Most doors will slam shut behind you and lock themselves. At times, simply turning around in a circle will change the entire layout of your immediate surroundings.

But occasionally you’ll run into some light puzzles. A hidden safe in a wall. A locked chest. Or perhaps you’ll find clues or keys to unlock puzzles and doors you aren’t aware of. Progressing too far, or, running into some undesirable entities within the mansion, will artificially place you somewhere else in the house with no option of ever going back, short of replaying that particular level.

This is what I could consider to be the game’s failstate. To unlock everything, and to fully understand the entirety of Layers of Fear will likely require a few playthroughs.

Personally, I don’t want to play through Layers of Fear again. Not any time soon, anyway. And that is not a slight against the game. If anything, it’s a twisted sort of praise. And considering the game’s twisted nature, perhaps twisted praise is the best kind of praise I can give it.

And the game is made so well. There are clear inspirational roots in Frictional Games’ lineup and P.T., but Layers of Fear never feels like a ripoff, or cheaply made. The environments are just stunning. The textures are sharp. The usage of actual oil paintings and classic literature draws great parallels from their own symbolism to the game’s symbolism. It’s not just good horror, but it’s clever storytelling too!

One of the game’s greatest achievements is its level design and its usage of perspective and how that ties to the protagonist as an artist. Certainly there are doors to go through that will change up the environment, but Layers of Fear really shines when it constantly alters the environment simply by the player looking around. There are moments when you can spin in a circle and the world continually distorts around you. You seek this inspiration and fight off your fears by literally trying to find a new outlook. You alter the house around you and the house has an effect on you.

But from a more grounded point of view, one of my favorite things about Layers of Fear is how player perspective also controls when the game will trigger its spook traps. In almost every other scary game, I walk into a new area and hear frightening music or sounds… a cue that there be supernatural dealings a goin on, and I’ll go off looking for what is meant to scare me. By the time I figure out what it might have been, the creepy little girl is no longer looking at me through the window, or the monster will have closed the closet doors. But in Layers of Fear the spooky sounds trigger when you are DEFINITELY looking at the scary imagery.

Layers of Fear took me a little under four hours to wrap up. That’s definitely short. At full price, it’s $20. I think it’s worth it but I do think that price is high. I’d be much more comfortable if this was down around $15. Most horror fans will really love this one. It’s not quite a walking simulator, but it’s close. Layers of Fear’s failstate left me itching with a sense of incompletion that simply dying can never do. But, players who need more “game” in their horror might want to wait for a sale.

I ran into some performance issues with some frames chugging in the final stage, but no crashes. No clipping. Overall, it’s a pretty sturdy game that is easy on the eyes, when it is not showing you grotesqueries. I went into the game expecting a hot disjointed mess like Stairs, or just another cheaply made horror game to hopefully get some legs out of scared overreaction videos like Daylight. But Layers of Fear is the real deal, a high water mark (with a pricetag just a little bit too high) in sea of horror schlock.