In the time of an apocalypse your friends can be the only thing between death and survival.

Left 4 Dead, yes you are left for dead, takes place over four campaigns with five levels to each campaign and 16 survival maps as one of four Survivors. You play as the old war vet Bill, the biker Francis, the IT guy Louis, and Zoey the only woman. The four campaigns each have their own theme.

No Mercy has you rushing to get to a hospital named Mercy hospital, ironically, to be rescued by a news helicopter. Death Toll has you starting outside of town and slowly moving through a town to a boat house to be rescued by a charter boat. Death Toll has you running through the forested countryside with a few buildings, with the climax leading up to a holdout in a farm house waiting for the army to rescue you in a land vehicle. Dead Air makes you run through a city through an airport to then holdout in the airfield to fuel up a military plane and fly off to safety.

There are three options to play L4D. The first option is to play the campaign with friends or not and the special infected are computer players. Option two is to play online in a versus match where you there are two teams of four, each team takes turns playing as either the Special Infected or the Survivors. The last mode is survival mode where you try to last as long as possible. 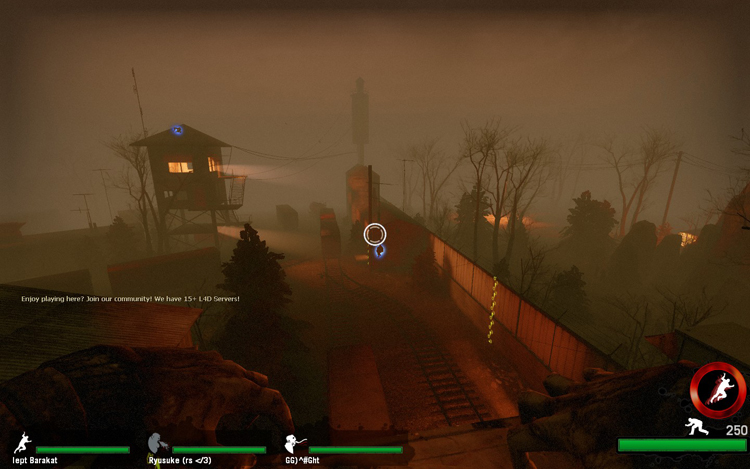 The campaign and versus modes are the same with a few changes. In the campaign, when a player dies, they can be resurrected from a closet, you can melee as much as you want, and you can only play as the Survivors. In versus mode, you play as both the Special Infected and the Survivors, and there is an anti-melee spam put in place to make it fair for the special infected.

The Special Infected consists of the Hunter, Smoker, Boomer, Tank, and the Witch. The Witch is an NPC who will incapacitate (incap) the first person to startle her. The Hunter can pounce from long distances or run up and slash the Survivors. The Smoker uses his tongue to grab one Survivor at a time; the smoker can make for good distractions by pulling Survivors back or off a ledge for lots of damage. The Boomer uses his bile that he projects out of his mouth to cover the Survivors and call in the Horde (calls in a bunch of zombies). The Last playable Special Infected is the Tank, his name says it all, he can take lots of damage and deal lots of damage with his punch that can hit multiple Survivors or he can pick up a rock and throw it.

Versus mode is the most played part of L4D and should be so, because it puts your team’s skills to the test. Please, if you haven’t played campaign yet, please play the campaign before playing versus online, it will save you from being kicked from a game for not knowing how to play. Always remember, if a Smoker or a Hunter is on a teammate melee to remove the infected player and save your friend, you will need every player. The anti-melee spam makes it so you can melee five times in a row before you have to wait two seconds for each melee to charge up to five melees, the anti-melee spam makes it fairer to the Special Infected players, and it makes the game more interesting. Also, corners are your friend in the Zombie apocalypse.

Survival mode is the newest expansion to L4D, adding 15 maps from certain sections throughout the four campaigns, and one new area called Last Stand. Not all of the levels in a campaign will be represented, but when a level is used, only one section of that level is used. The goal is to last as long as you can before you die which ends the round. You get medals for reaching a certain time marker. At 4:00 minutes you earn a bronze medal, at 7:00 minutes you earn a silver medal, and at 10:00 minutes you earn the gold medal. As time progresses the spawn times for the Special Infected, Common Infected, and Tanks will decrease making each attack harder and harder. There are also lulls (breaks) where no more infected spawn until a certain time when they start to spawn again. 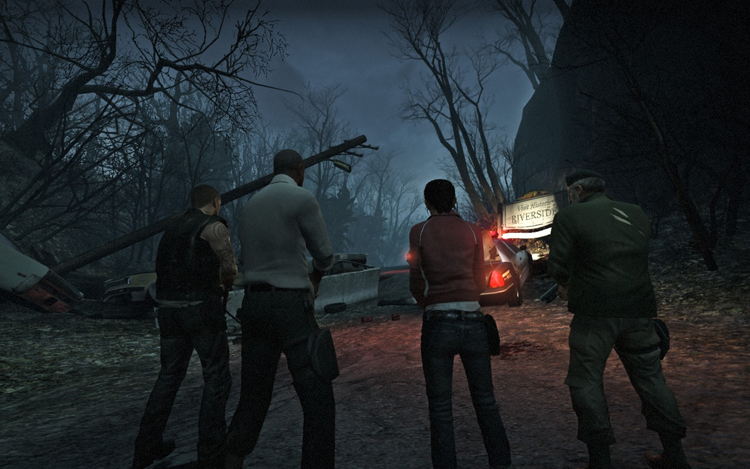 You might be asking, “How do I kill the Special Infected?” Well, you start out every round with a pistol (pistols have unlimited rounds) and a choice between an Uzi and a Pump Action Shotgun. Throughout the levels you can find a second pistol, Molotovs, pipe bombs, gas cans, propane tanks, oxygen tanks, minigun turrets in fixed positions, an Assault Rifle, an Auto Shotgun, and a Hunting Rifle. The fastest way to take down a tank is to light him on fire and fire away at him with the auto shotgun or if you can use propane tanks, the explosion from the propane tanks or oxygen tanks are powerful, try to avoid standing near explosive devices.

L4D is a great game to play with friends and even with random people. Since the game is made by Valve, there will be official content packs added to the game ever 3-6 months or so for free. Currently at the writing of this review the Source Development Kit (SDK) has not been released, but the SDK should be out soon and that will add a lot of content to the PC version of L4D.

If you haven’t guessed by now, I am strongly recommending that you buy L4D if you own a PC. If you have an Xbox360 and you liked Nazi Zombies, you will like L4D and should go out and buy the game. Also if you have a 360, and you are unsure about the game, you should give it a rent and see how you like this game. L4D is fun and addicting and you should give it a try, you will have a blast killing zombies and trying to achieve that achievement of killing 53,000 zombies. Have fun killing zombies and humans in the struggle of survival of the fittest.

About the Author: John Jinneman has been gaming for over 14 years and started like many of us playing Super Mario Bros. on the Nintendo Entertainment System. This is John’s first article for Elder-Geek.com.