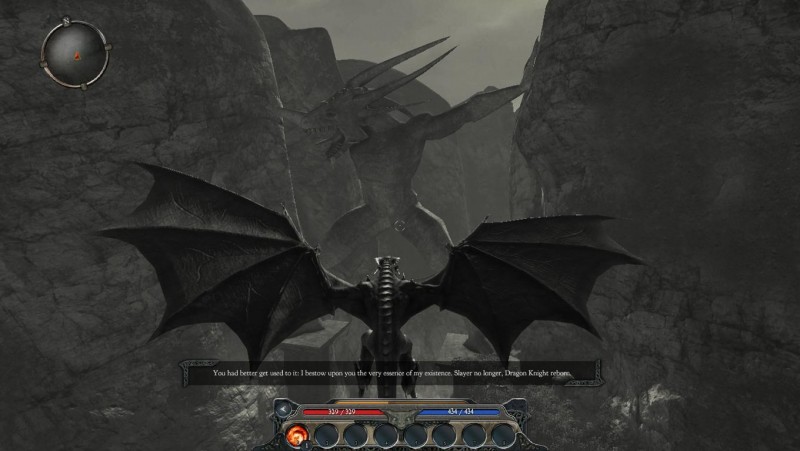 From Slayer to Dragon Knight: Irony?

There is nothing more badass than jumping into a horde of enemies and then suddenly transforming into a fire-breathing dragon spewing a blast of flames engulfing the helpless minions on the ground below. Divinity II: Ego Draconis is one of the first RPGs to hit the market in the new year bringing RPG gamers back into an imaginary world named Rivellon where dragons, magic, and mystical creatures dwell. Players take on the role of a Dragon Slayer, who belongs to an ancient order of warriors dedicated to cleansing the world of the half-human Dragon Knights, who were the ones who supposedly killed the Divine. You begin the game at the point where your initial training comes to a close and undergo the next stage of becoming a Slayer, which involves a process where you are imbued with the dragon memories which grant the Slayers their formidable powers including some dragon traits such as mindreading.

The story takes an early twist, however. As you set out to explore the region looking for your commander, your character encounters one of the mortally wounded Dragon Knights, who manages to psychologically make you convert to becoming one yourself. Once you have a taste of becoming a dragon, it is hard to go back to slaying them! From Slayer to Dragon Knight, you are forced to realize the actual threat to the world and set out to save it from a greater evil. 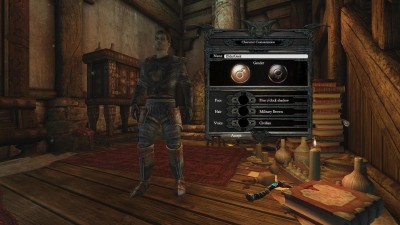 The character mechanics are simple enough compared to other extensive RPGs such as the most recent dragon-themed game, Dragon Age: Origins. There is only one race that you can be and the amount of customization of your character is limited. However, the subsequent quest more than makes up the amount of time you would be spending had the character customization been more extensive. Once you begin the game with your new character, you are given three class choices: Warrior, Ranger, and Mage. Naturally, depending on what class you end up choosing, you are given certain abilities that are able to be improved as you level up.

Each level-up and the occasional skill book that you find gives you extra skill points to be assigned, with an initial maximum of five applicable for each skill. These can be put anywhere, unrestricted by any class system. The result is you can build a well balanced hero. However, the effect of these skills are determined by your placement of the five stat points you receive for each level. Action skills, which include your class skills as well as the skills from classes that you did not choose, allow for diverse molding. The variety of progression options, which are split into categories of Priest, Mage, Warrior, Ranger, Dragon Slayer, and later Dragon Knight pretty extensive, but not too overwhelming. You will find that it becomes necessary to begin branching out as you will rapidly upgrade your primary class skills. In addition to upgrading through skill and stat points, there will be a large variety of unique items that provide additional boosts to your character. Every little change in stats makes a difference between success and defeat. 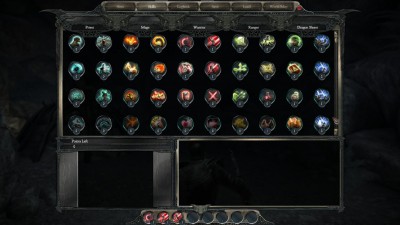 You can spread the wealth around and dabble in other classes. 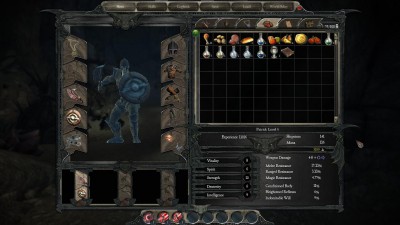 Choose wisely on how you upgrade your stats.

The combat in Divinity II is pretty active in that there are tons of enemies wherever you go. Regardless of your class, you will frequently find yourself fighting at close quarters as enemies tend to bum rush you leaving you with little breathing space to execute ranged and magic attacks. Although hack and slashing your way through the land seems awesome at first, it could get pretty redundant as you’ll most likely find yourself constantly doing the same moves. Despite the simple melee attacks, the magic and special skills look great and provide for some dramatic kills, especially when you begin shooting fireballs as your dragon form. Be prepared to quicksave quite a bit because the constant fighting will eventually consume you. The difficulty is hardly noticeable even on easy. Even though challenges are welcome, I don’t want to spend most of the game frustrated trying to move two feet just to get to a dungeon entrance. Another source of frustration is the targeting system. There are certain points when you want to ambush a group of unsuspecting goblins, but the problem is that they automatically detect you even if you are well hidden. Sometimes when you target one foe, you end up executing an attack on someone else or not executing the selected skill at all. Despite these setbacks, they most certainly could be remedied with a patch. 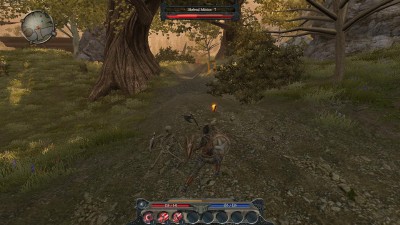 Another feature that one would expect when playing an epic RPG is the conversation element. As with many RPGs these days conversations offer a range of moral choices. In Divinity II, however, quest outcomes are decided more on actions rather than your wordsmith finesse. You could be a total ass and treat someone with vicious contempt and still end up getting what you want or need. In addition, there is a lack of reputation to be gained for your character as well as no real game-wide consequences for behavior. It’s something which could have deepened the experience considerably, and certainly given more pause to conversational decisions.

Players will also notice one of the more dominant features during conversations: the ability to mindread. This Slayer power comes at the cost of an XP debt and is usually directly related to the usefulness of the information obtained. Rewards for this useful power can range from stat and skill boosts to passwords, anecdotes or quest information, right down to completely useless musings on what the NPC had for lunch. It is definitely a fresh and interesting feature to have and makes for unique ways in playing the game. 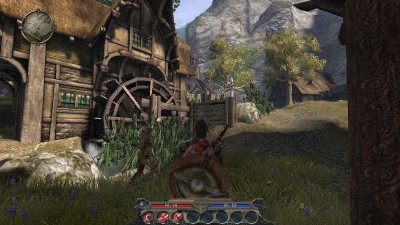 In addition to the main storyline quests, there are a great deal of side quests, which I highly recommend that you endeavor to do when you have the time because it allows you to train your character and prepare for the inevitably harder missions to come. It also gives you the chance to obtain new items, and rare armor and weapons, which is always a plus. As you travel throughout Rivellon, you will immediately notice the beautiful environment (depending on your specs, of course) as towns, caves, forests with rivers, and dungeons are well designed and greatly enhance the feel of the game.