You know how they say never judge based on appearances alone? Well in the case of Valkyria Chronicles you can disregard that advice because the bold and refreshing nature of the visuals carries over to the gameplay in every single way. The entire game oozes innovation. In a genre as well established as the RPG, that’s a pretty hard thing to do.

The year is EC 1935 in the continent of Europa. The Eastern Europan Imperial Alliance, otherwise known as ‘The Empire,’ has declared war on the Atlantic Federation. To facilitate their advance on the southwestern portion of the continent, the Empire invades the tiny neutral nation of Gallia—your home.

You play Welkin Gunther, a young university student returning home to find his country under siege. You are joined by your sister, Isara, and a passionate young girl named Alicia. Together you are all forced into the Gallian militia, tasked to defend your borders to the death.
The storyline, you’ve undoubtedly noticed, is based on World War II. Add a bit of futuristic technology and you have a rough idea of what Valkyria Chronicles is like—a sort of strange steam punk mid-1930’s. While the world is interesting enough, striking a balance between historical influence and poetics, the true beauty of Valkyria Chronicles lies in the incredibly innovative battle system. It’s not quite real-time combat, but it’s not quite turn-based, either. It’s not exactly strategic combat in the strictest mathematical sense, but your actions have a sort of structure to them. What it is….is new. 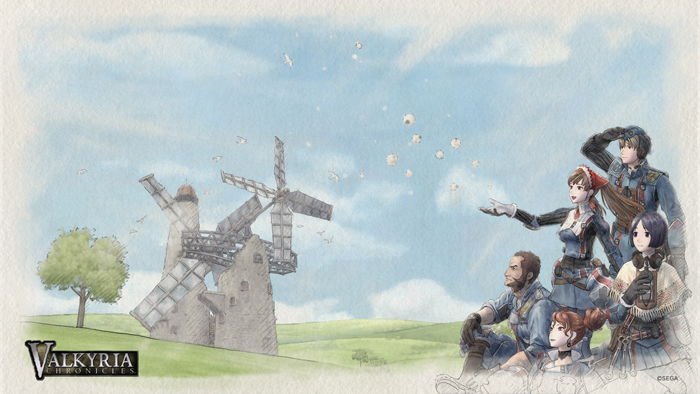 Shocking, I know. The genre has been around for two decades and it seems impossible to come up with a battle system that’s creative and original without seeming gimmicky. But SEGA has done it.

The combat begins with your party selection—as the leader of Squad 7, it’s your job to hand-pick from a large pool of soldiers a well rounded squad with members of each class. There are five classes; Scouts, Shocktroopers, Lancers, Engineers, and Snipers. Each fills a certain niche and it’s up to you to choose the right soldier for the job. 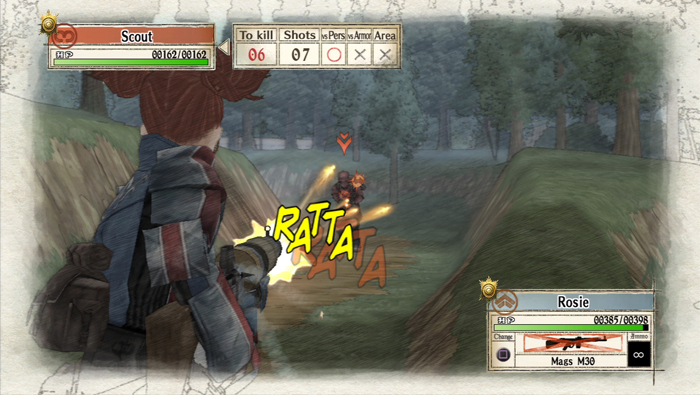 When the battles begin, you are allowed to place a certain number of soldiers and at no time may you have more than the initial number on the battlefield. Should one of your comrades fall, you may call reinforcements from a command post, but you may never exceed the initial limit.

The placing of your soldiers is of the utmost importance. Thanks to a dynamic synergy system, certain soldiers like certain other soldiers. There are a few prejudiced members of your squad who won’t fight alongside ‘Darcsens,’ and others who thrive in the company of the opposite sex. It’s your job as commander to take all of these factors into account and distribute your units accordingly.

In addition to that, each individual unit has certain traits that make him a better or worse fighter depending on his environment. Some fight better when surrounded by nature, others have pollen allergies which make them inefficient in tall grass. Some have matronly instincts that increase their abilities when close to wounded friends while others get a status boost when outnumbered.

It’s a bit complicated at first, micromanaging your squad, but you get the hang of it. Each soldier has his own personality, which makes losing them all the more painful. Yes—if a soldier under your command dies, then that’s it. That character is gone and you may visit his or her grave in the war cemetery. There are, of course, plot-vital characters that can’t die, but you tend to start grow attached to a certain batch of troops and when one falls in battle due to your mistakes, you feel the sadness, guilt, and regret.

Another interesting thing about the game is the leveling system. At the end of each battle, you are given experience and money. Rather than leveling up each character as an individual, which would result in an extremely skewed outcome with your ‘favorites’ being overpowered and your reserves being underpowered, you instead level up classes. This allows for favoritism without that nagging feeling that you’re letting your other party members suffer.

As for equipment, a visit to the Gallian Research & Development Labs will allow you to spend your cash on upgrades for weapons and armor. You’ll also have the opportunity to upgrade and customize your tank, the Edelweiss. 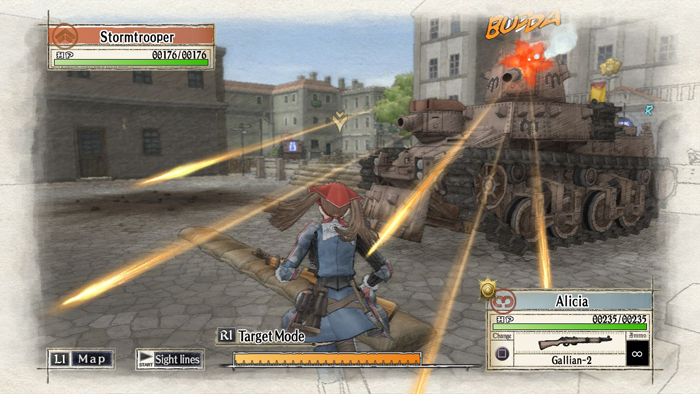 There’s one other feature that I thought was particularly helpful. Due to the episodic structure of the narrative, with each chapter divided into single cutscenes that can be replayed at any time, there’s less of a commitment required when playing this game. You can start playing one week and pick it up the next month, reviewing the past few cutscenes to get up to speed before continuing. It’s something that I really appreciate because too often I start playing an RPG and, due to lack of time, end up putting it aside until I’ve lost track of the storyline, forcing me to replay the beginning yet again.

If you like RPG’s and thinned your wallet considerably to purchase the PlayStation 3, you owe it to yourself to buy this game.  It’s not a rental because the ‘Skirmish’ options allow for a lot of replayability and the main campaign, depending on how many skirmishes you undertake, will take upwards of 30 hours. The captivating storyline, well translated dialogue, excellent voice acting, and, of course, the gameplay, make this one of the best titles on Sony’s machine. This one is perfect for the hardcore gamer–one who can appreciate influences from many different genres and one who is eager to test his mettle on another proverbial battlefield.