This game is the first huge step in the DS’ battle to distance itself from its ‘kiddy’ image and in that it succeeds on all fronts. Streamlining the GTA experience down to the bare necessities while still keeping the adult-oriented dialogue, plotlines, and objectives makes Chinatown Wars quite unique.

Those of us unfortunate to have played GTA Advance will look upon the newest handheld venture into Liberty City with skepticism. But where its predecessor failed, Chinatown Wars succeeds. It manages to distill the gameplay we’ve come to know and love down to its roots before rebuilding it to suit the platform.

You play Huang Lee, a spoiled Triad brat sent to Liberty City to deliver a ceremonial sword to his Uncle after the death of his father. Upon your arrival, you are ambushed, shot, and left for dead. The sword is stolen and you must begin your quest to restore your family honor and recover the artifact. 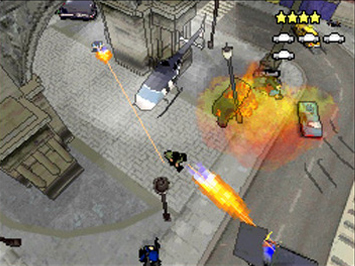 Along the way you’ll meet dozens of characters that fit right in the GTA universe and the typical formula plays out with you performing tasks and missions for various people as you progress through the storyline.

The gameplay is excellent. The driving feels smooth and responsive, though the motorcycles are a bit hard to handle. The targeting system works well enough and while it’s not perfect, I can’t think of any way to improve it. Included are gameplay improvements seen in recent entries such as swimming and climbing.

But the game also brings several new features to the table. The most prominent one is definitely the drug-trade mechanic. Anyone who has ever played the cult PC classic Dope Wars will feel right at home as you travel around the city, picking up tips and buying/selling all sorts of narcotics. The money you make from trafficking more than makes up for the lack of monetary reward for the missions. If you want to do well in the game, drug trading is something you’ll have to do—it’s not some ancillary feature. 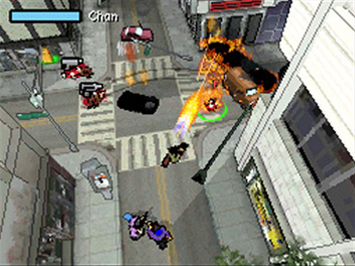 The way you escape the police has changed, as well. You can outrun them and stay out of sight for awhile, or you can take out your pursuers’ vehicles by any means necessary. It makes it seem much more realistic and it adds a whole new dynamic to being chased by the cops.

The game also makes use of the second screen, which serves as a map, radar, and inventory page. You can zoom in on the map and set markers, you can choose an option to have directional arrows appear on the roads on the gameplay screen (an invaluable feature if you’re unfamiliar with the layout of Liberty City).

Additionally, your PDA serves as your options panel, your email, your radio tuner, and even your gun shop—rather than having a few locations around Liberty City, you can now have guns delivered to your Safehouses. Or you can hijack Ammu-Nation supply trucks or raid hidden weapons caches around the city. 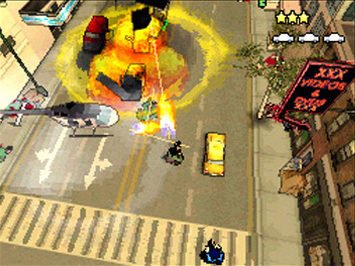 Another thing that Chinatown Wars does especially well is make creative use of the touch screen. Rather than having a slew of useless mini-games, you are prompted to use the touch screen at appropriate times. When stealing cars, you often have to manually hotwire it—something that’s incredibly nerve-wracking when you have a wanted level. If you want some Molotov cocktails, you stop by the gas station and fill up as many bottles as you can, trying not to spill too much.

The game is, of course, not in full 3D like the PSP entries in the series. It isn’t exactly top-down, either, like the earlier titles. Instead, the game employs a 3D isometric camera that rotates as needed with excellent accuracy and reliability. As a result, the player is always in view. The addition of a user-controlled camera allows for even greater freedom. And speaking of freedom—the Liberty City of Chinatown Wars is almost an exact replica of that of GTA IV.

For a DS game, Chinatown Wars looks great. There’s no licensed music and no voice acting, but that’s to be expected given the limitations of a single DS cartridge. However, cutscenes done in the typical GTA art style relay plot elements adequately and well written dialogue fleshes out the characters and compensates for the lack of voice talent.  As for music, you’re given a selection of stations that mimic certain genres of music and they serve their purpose. 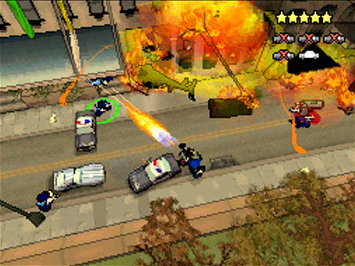 This game is a must-own for the more mature DS owners. On a platform with so few games targeted at an older audience, it’s rare that one is executed so superbly. And with the main storyline taking about 30 hours depending on how sandbox-happy you are, you’ll certainly get your money’s worth.