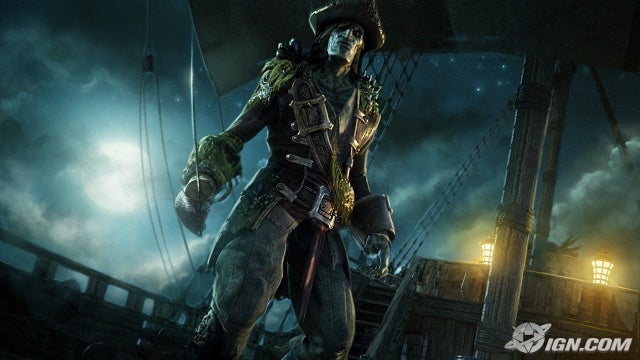 In an interview with IGN yesterday, details were revealed for a previously unknown game based on the Pirates of the Caribbean license. Speaking to IGN was director of the game Alex Peters, employed at Propaganda Studios. According to Peters, the game will be entirely open-world, and contain both land-based and ship-based content.

Previous games based on the popular movie franchise, developed by Bethesda Softworks (2003, 2006) and EuroCom (2007)  had received generally negative results. The game, titled  Pirates of the Caribbean: Armada of the Damned is being developed by Propaganda Studios, the same developer who created 2008’s Turok.

According to the game’s director, the game will be set before the events of the movie trilogy and will not be based off the characters found in the popular movies.  Also, the game will make use of the ‘gray area’ when it comes to morality for pirates, and give the player ample choice in how to approach situations and how to respond to NPC’s. As the game progresses, the appearance of both the playable character and that of his or her ship will be reflected by the choices made throughout the game.

The first official (rather rough looking) screenshot for the game.

The game is set for release on the PC, Playstation 3 and Xbox 360, but does not yet have a fixed release date. More information is likely to be revealed at the E3.