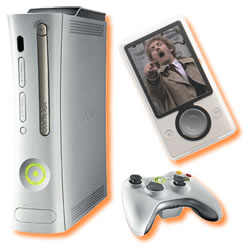 Microsoft today announced that the end-to-end entertainment service formerly tied exclusively to their Zune portable media player, will now be expanded and made available internationally on the Xbox Live service this autumn. Zune will bring its premium music-and-video capabilities to the console, available for the first time in Europe, and will bring along with an impressive catalog of television shows and films to the Xbox Live Marketplace. The service integration will presented for the first time at E3 next week. Costumers will now have the option to watch the Zune’s catalog of entertainment in many forms, either by streaming, or downloading for rent or to own. In addition to this announcement, Microsoft has announced the next generation of the device, the Zune HD.

“The Zune experience is growing beyond a music player in the U.S. Zune’s international expansion starts with video on Xbox LIVE; eventually we’ll offer the full digital entertainment experience spanning screens, devices, platforms and geographies,” said Chris Stephenson, General Manager of Consumer Marketing for the TV, Video and Music Business. “Delivering on Microsoft’s connected entertainment vision; this news marks a turning point for Zune as it brings cross-platform experiences and premium video content to living rooms around the world.”