It’s finally here.  The perfect Bomberman game.  The series has been on a long journey—from the original box art that looked conspicuously like a certain first party Nintendo title to the abhorrent Bomberman Act Zero, everything has culminated in Bomberman Ultra: the sum of all the best parts of the series, presented exactly how fans want it.

Following up on Bomberman Live and Bomberman Blast, updates to the franchise available, respectively, on Xbox Live and WiiWare, this title is available exclusively on the Playstation Network and if you enjoyed the core gameplay of the series, then this is a must-buy.

The game plays just like the original or any of the Super Nintendo entries in the franchise.  You’re in an arena with two types of blocks (always stylized to fit the stage’s theme); ones that blow up and ones that don’t.  Using your bombs, you blow away the obstacles in an attempt to get power-ups and annihilate your opponent.

Power-ups are definitely the most important thing in any Bomberman title and the classic ones are all here.  But new ones have been thrown into the mix to give things a bit more flavor.  Fortunately, when creating matches off or online, you can pick and choose which power-ups to have available and whether or not to have the new ‘power-downs,’ which pose a huge threat to those of us who have been programmed to pick up anything we find. 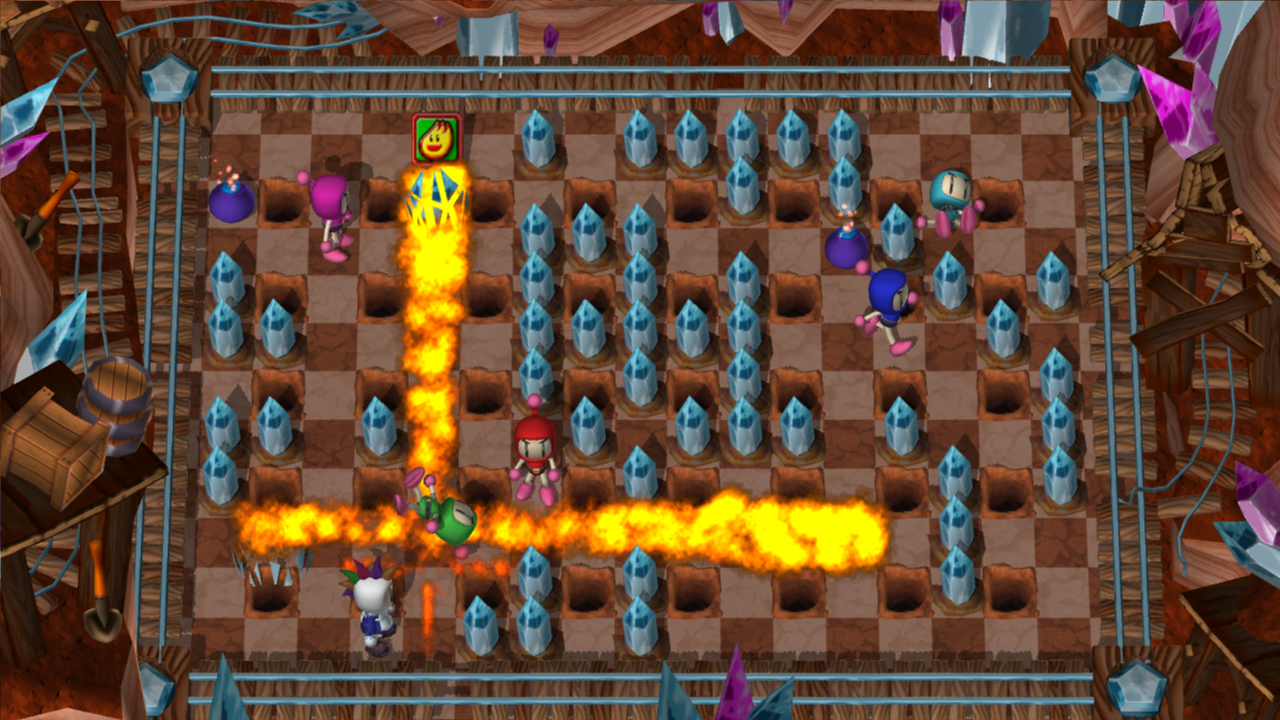 Other additions are the Gimmicks.  Hudson Soft has no delusions about these features—they are Gimmicks.  But, like everything, they are optional and they can make a match a lot more fun.  Some of them include arrows on the ground that allow you to kick your bombs even if you don’t have the bomb kick power-up while others manifest in the form of numbered platforms that increase and decrease your movement speed accordingly.

Players will also find a few new game modes including ‘Paint’ and ‘Zombie Paint.’  In both, the goal is not to kill your enemy but to paint the arena with your color by using your bombs.  The only difference between the two is that in Zombie Paint, you have infinite lives so even if you’ve painted 90% of the board halfway through, getting killed will leave the arena open to others, taking you out of the action for a few precious seconds while you respawn.  You also lose your power-ups.

Hudson Soft has also introduced a very fun ‘revenge’ feature.  Upon being killed, you’ll find yourself in a bomb launcher attached to rails along the sides of the arena.  You can fire one bomb every few seconds, shooting it further depending on how long you hold the button.  If you manage to exact revenge on the player who ended your life, you switch places with him and get a second chance.  However, since you can’t have any power-ups when you’re in ‘revenge mode,’ you can only fire one bomb at a time and it’s relatively weak.  But it fills its role of giving players something to do even after they’ve shuffled off the mortal coil. 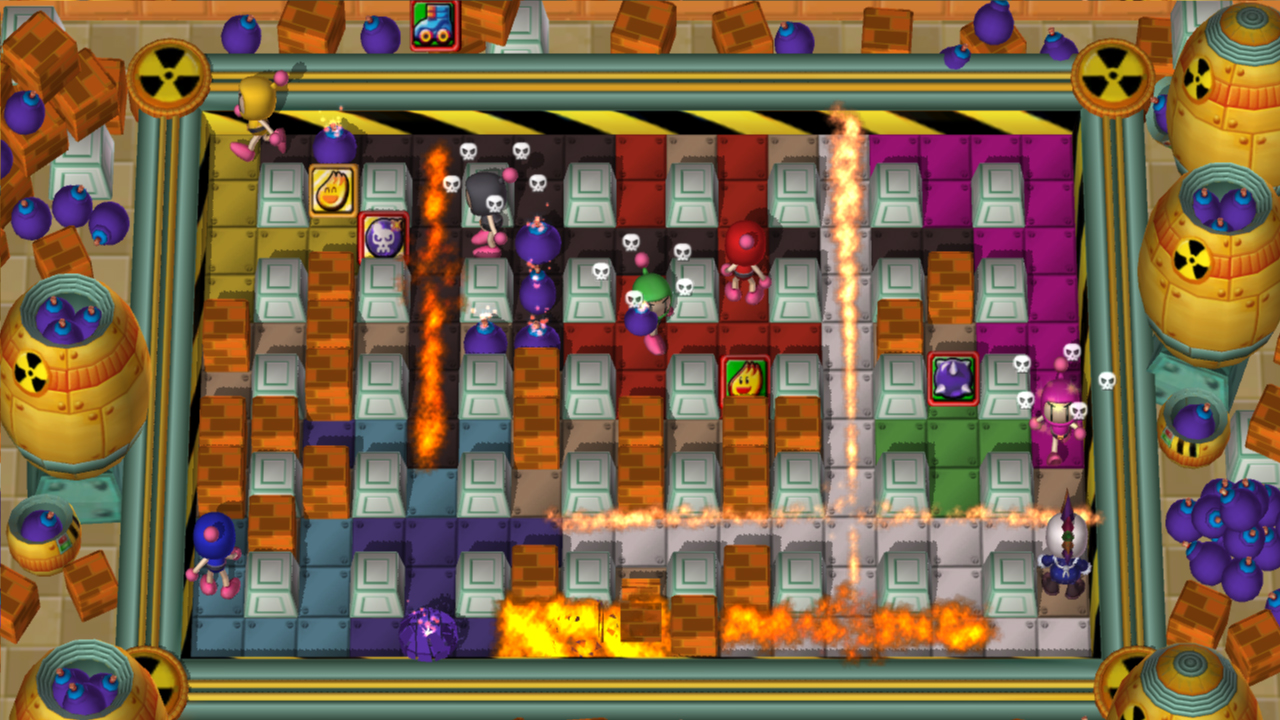 One more change is the new customization feature.  Taking a cue from LittleBigPlanet, you can now outfit your Bomberman in numerous costume pieces for your body, face, and head.  All of the costumes are unlockable from the outset and they offer over 150,000 unique combinations.  The only problem is that costumes are unlocked at random.  Whenever you pick up a ‘Costume Ball’ in an offline match over two minutes in length, you unlock another costume piece.  But since it’s all random, you never know how long you’ll have to play to unlock the coolest costume.

As for the costume offerings, there’s the standard array of racial and historical stereotypes (the ‘ghetto’ costume, a Centurion costume) but there are a few that stand out as being amazing.  Like a costume that has you dressed up as Johnny Depp as Hunter S. Thompson in Fear & Loathing in Las Vegas The components are called ‘Shark Hunting Hat, Fear & Loathing Shirt, and Bat Country Shades.’) .  There are also costumes that parody famous movie characters and historical personages.  (Bomb 2-D2, Charles Bombergh, Clint Bombwood, Neil Bombstrong, the Bomberman of Alcatraz, etc.]  Though I can’t see how they missed ‘Marilyn Bombroe.’)

The multiplayer is truly where the game shines.  You’ve got four-player local multiplayer (now without a massive multitap accessory!) and eight-player online multiplayer.  In both modes, everything is customizable.  There are over a dozen arenas to choose from and you can decide whether you want ‘Classic’ or ‘Gimmick’ gameplay (the latter of which employs the gimmicks I mentioned earlier) but it doesn’t stop there.  You can hand pick the power-ups/downs you want, choose to have disease pick-ups and decide how the disease is transmitted, and turn ‘Scavenger Mode’ and ‘Bomb Shelters’ on or off.  Scavenger mode allows you to pick up power-ups from a downed opponent and Bomb Shelters are…well…bomb shelters. 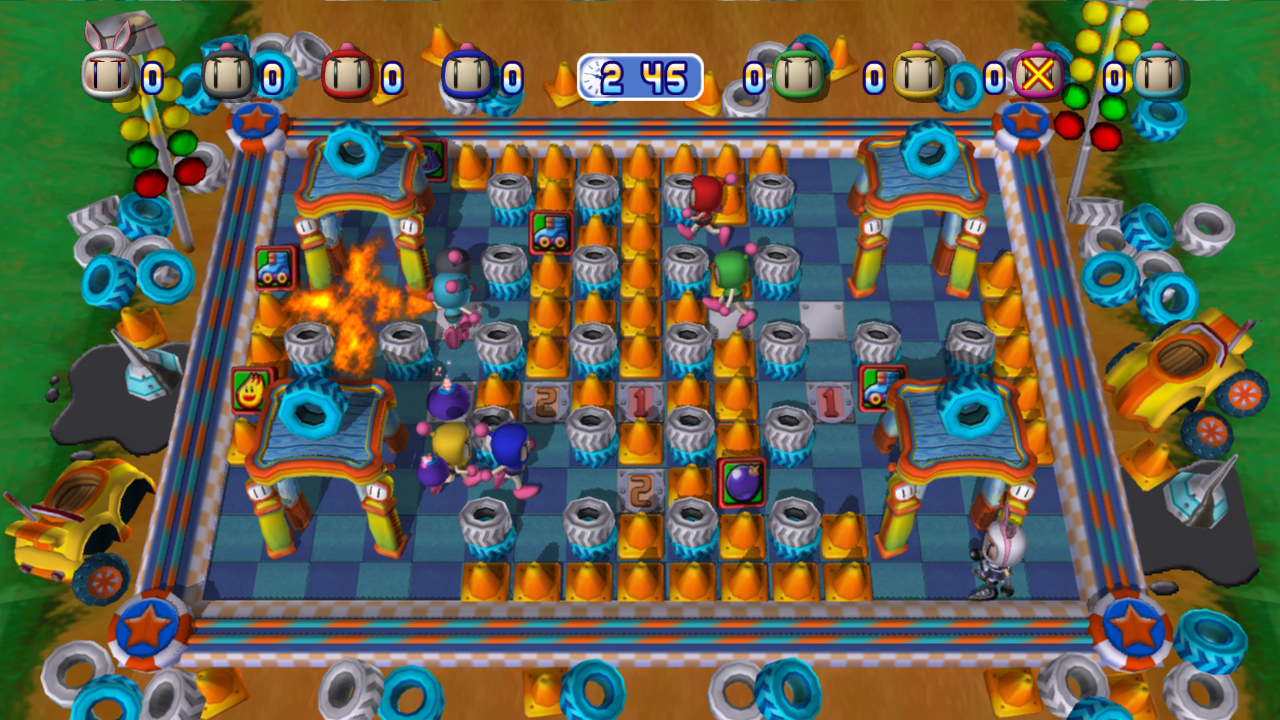 Aside from the random costume unlocking, the game is exactly what it should be.  The online multiplayer couldn’t be simpler, it’s still just as exciting to play as it was back in the day, and the fact that you can now enjoy it with seven other players makes it a blast.  Wow.  What a terrible pun.