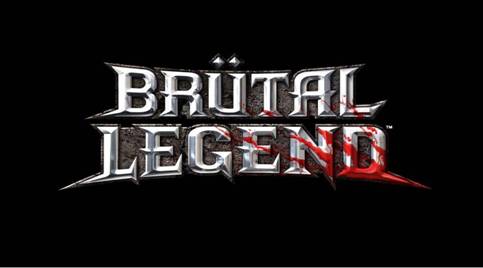 A title that had been anticipated for Tim Schafer’s name alone, I had unfortunately missed any interview opportunities with a member of the game’s development staff and can only discuss the demonstration levels on display.

To quickly summarize the game for those unaware: Brutal Legend is a game set in the mythical Nordic-inspired world often featured on Heavy Metal album covers, starring a rock band roadie named Eddie, who gets sucked into the land of bombastic enchantment after he mistakenly got some blood on his cursed belt buckle. Once there, he must unite several rebel groups to take on an evil threatening the entire world. Lead Designer Tim Schafer’s humor (molded from previous games like Psychonauts and Grim Fandango) is apparent in every pixel, and it’s hotly anticipated as a hack-and-slash action adventure title set to hit stores this Rocktober.

The demo takes the player across several gameplay options, starting off at the game’s earliest stage with Eddie required to get both an axe (meaning guitar) and an axe (meaning an axe) to fend off waves of red-robed enemies. After nabbing both weapons, I stage-dived into combat with the priestly foes and attempted a couple of combos. To the game’s credit, it was an early stage, with many combos said to be unlocked later on, but it still managed to have a button-mashing feel to it. You had your basic axe attack that could be chained together for a rabid slash combo, and a guitar (magic?) spell that cast lightning and, if held down, fireballs. I managed several times to get a decent combat flow going, but could have done with a couple fewer waves of easily vanquished enemies.

Without settling into too much of a boring cycle, I hacked my way through the minion class of monsters to introduce a new character. I would speak on the story at this point, had I been able to hear anything but sound effects over the roar of the E3 crowd. The snippets of reaction lines and facial expressions that I did catch felt right in line with the wit and sass expected from Schafer, even if the facial expressions and synching did feel a bit outdated in their twitchy animations. After the introduction of the new female sidekick, a more powerful enemy type appeared for the slaughter, and I obliged with about as much strategy as the minions before them, and again carved a righteous hole through their stomach. My gamer-pride inflated, only to fall flaccid with the normally useless PR commentator telling me I was on easy mode.

After the defeat of the second assault of enemies, I was charged with performing a guitar solo to unlock a plot point. The easiest way to describe this mechanic is a cross between Guitar Hero and the ocarina segments of Legend of Zelda: Ocarina of Time. Hitting appropriate notes on a side-scrolling rhythm meter for long enough to appease the game and let me progress. This time, my face-melting skills landed me Eddie’s car, a monster of an automobile with all of the standard metal trappings: 8-ball stick shift, skull and horns accessory motif, gigantic exhaust pipes that shoot fire…the works. It was up to Eddie then to guide the car and his female companion across a rapidly cracking bridge, with little groups of enemies gunning for his soul along the way.

To its credit, Brutal Legend controls much smoother than many tacked-on action game driving segments, with your usual shoulder button-controlled acceleration, braking and face-button ignition. The enemies along the way posed little threat, practically lining up to become tire-filling. With barely audible directions shouted from my female compatriot, I was able to navigate the crumbling bridge with little failure, and managed to push Eddie and company off the final ramp and onto the boss-battle arena stage.

The monster in this case was the kraken-esque acid-spitter often featured in trailers, with me driving about in Eddie’s car and waiting for it to attack, miss me, and lodge its tongues into the ground long enough for me to leap out the vehicle and hack one off. The whole process felt a bit stilted, getting out of the car each time felt like it took just a second too long, and the camera was a bit unforgiving in terms of letting me see only me and the breadth of the monster behind me, as opposed to seeing the monster behind me so I can gauge his readiness to attack. One, two, three tongues later and the beast was screaming in agony, Eddie having just enough time to work up a few Jack Black come ons to his new lady friend before the demo ended.

The playable version was a decent indicator of the final build coming out in a few months, which, by my observation, means Brutal Legend will be very much in line with Psychonauts, meaning the Tim Schafer story and jokes will be worth the price ten fold, but many gamers will be turned off by the comparatively outdated controls. While everything controls well, pulling off combos feels like you are fighting the game a bit too much, and the repetitive enemy waves can drain a lot of the “cool” factor gained by the fact that you are playing a guitar and summoning lightning. Does that mean I’m not buying it? Hell no man! It’s Tim Schafer!

Winner of the Elder Geek E3 Award for: Best Use of Jack Black
and
Funniest Game of the Show