The most uneasily anticipated game coming out for the PSP this year had a big show over at its Square Enix booth, but with the immense lines attached to each game playable there, I settled for returning to the Playstation area later in the week to find the single modest kiosk featuring the game and plugged in for a few Final-on-Fantasy brawls.

The selection screen itself was pretty basic and easy to use, with the logos of the characters’ specific game on a scroll-bar to the left, and a box on the right where a selected character’s avatar and stats would appear. The playable character list available for the demo was a bit lacking for my taste, with neither characters from Final Fantasy IX available to fiddle around with. Instead we had the protagonists from Fantasies I-VII, with Sephiroth being the sole antagonist available for fan-boy drowling-over. I went with Cecil from Final Fantasy IV and waited through several loading screens filled with combat tips (helpful) and screenshots (not so helpful).

Gameplay videos really hurt Dissidia, making the title seem much more difficult than it really is. Strong and Swift attacks are mapped to the square and circle buttons, respectively, with ‘x’ being the expected jump. Several stages have multiple levels and railings that could be interacted with the triangle button, causing your character to wall-run or slide down railings in appropriately cool Advent Children-style finesse. Attacks are split into two styles, one damaging the direct line points with another damaging your opponent’s guard. While complete life-point depletion is the only requirement for victory, hammering away at your opponent’s guard will open them up for more damage per attack, and cause their own attacks to carry less weight. 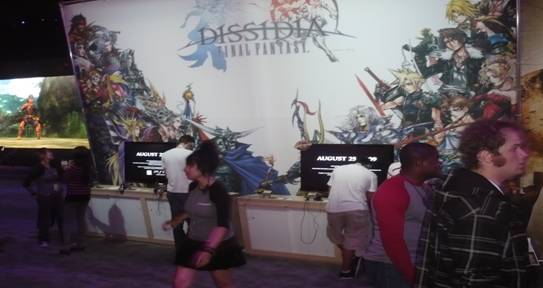 ‘X’ can also be used as a dodge key when being directly attacked in an air juggle, and if successfully implemented will open up a chance for you to throw out your own dodge-able air attack. The shoulder buttons strafe and roll your character defensively, and at some points during the battle (never figured out the rhyme or reason to it myself), your character can enter EX Mode, the game’s answer to the series’ famous Limit Breaks or Trance moves. In such mode, your characters are shot into what appears to be a color-changing version of Final Fantasy VII’s life-stream, where different modes of input are required for each character to (to paraphrase the sad sad Mr. Hirai) “…hit their weak points for massive damage.” You’ll immediately recognize these inputs if you have played the character’s corresponding game (Tidus has that sliding bar with the small yellow spot you have to hit a number of times, for example) which is a nice touch.

Even reading all this makes the game feel very complex and overly dramatic. In the middle of gameplay, however, its impressive how quickly these many controls begin to feel natural and come second nature. Couldn’t quite get the handle of EX mode through my four fights, but with a rental I’m sure I’d get it eventually. Environmental interaction is cute, but some stages force it by being extremely diverted and sparsely grounded, making it feel a bit like a chore. The multiple loading screens per fight is a bit of an annoyance as well, but the quick-to-memory controls and impressive magical effects implemented with each attack make this a pretty and amusing brawler that doesn’t require a lot of Final Fantasy knowledge or even enjoyment to have fun with.

Winner of the Elder Geek E3 Award for: Best Use of Particle Effects
and
Most Shameful (and Welcome) Fan Service