Beneath an opaque, wall-sized banner showing an over-exuberant model having too much fun with his Nintendo DS, lay a trio of unassuming kiosks boasting one of the most enjoyable and open-ended hand-held games of this generation, Scribblenauts. Unprofessional of me to pass judgment at this point in the development cycle, I know, but a simple fifteen minutes with the game draws such child-like glee from your pores that it feels like Christmas morning in a Rankin-Bass special. Imagine the uncontainable excitement of an hour of gameplay.

Oddly enough, the first game that came to mind when the game booted up its first demonstration level was an online, independent title named Crayon Physics, where the stage-ending star lay just out of reach of my character, the challenge being to cross that distance while utilizing the game’s realistic and deep physics engine. While Crayon demanded players draw solid platforms and objects to help cross the void, Scribblenauts is a game that has, arguably, the biggest off-screen inventory in history, which include a universe of equippable and usable itinerary that can be summoned with a couple types of the stylus.

The game is split between the upper and lower screen, the latter containing a keyboard for object-name input, the former containing the gameplay world. Both the background and your character have a simple, pixilated look that does not push any boundaries, even on the comparatively weak DS hardware. However, the game has a distinct charm, as if drawn by a child whose work you can actually put on the fridge without shame and embarrassment. Levels are incredibly sparse and open, intentionally, using only you and your obstacle with great gaps of background in between. When you spell an object into the world, it falls from the sky and can be instantly manipulated to solve your mission or to just have fun.

The first of my two missions was one of fairy-tale simplicity; I needed to get a star that was stuck in a tree. Immediately ignoring my gamer problem-solving instinct, I spent the next half hour attempting to find an object that the game developers did not program into existence…I failed. I did get a few giggles out of being denied a “PSP” and “Xbox 360” on this DS game, but copyright infringement aside, the designer’s lexicon is truly immense. Sparing the tedious details of each and every encounter, I was able to summon an a vast quantity of items into the world by simply typing their names correctly at the bottom screen, all becoming tangible and throw-able and, in some cases, usable as a weapon. 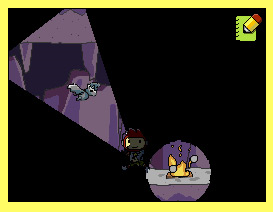 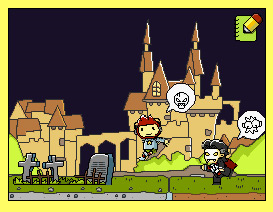 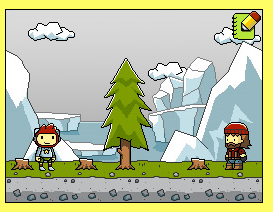 LittleBigPlanet players will immediately feel at home with the post-summoning screen, where the action pauses long enough for you to do any necessary positioning of your materials before tapping on the screen to have the objects fall into their realistic virtual weight. Doing so appropriately can also make different objects interact with each other. One of the developers had put a shotgun-toting Yahweh against a monstrous Cthulhu when I came back the next day.

My pizza cutter failing to cut down the star-hoarding tree, and the line of people behind me beginning to vocalize their impatience, I decided to actually play the game. Having seen many solutions to this puzzle before, I tried as I always do to be unique and thus superior to all that have come before me. Also, being a pyro-maniac of sorts, I decided to set the tree on fire with a flamethrower. The nasty device fell from the heavens at a flick of my stylus, was picked up, and quickly disintegrated the tree before me, leaving the star in my grasp. Collecting it ended the first stage and set me at the opposite end of a pier from a beached whale, which I, inevitably, had to rescue.

While the toted in-game physics made summoned objects bounce and act with realistic force, it was time to test its limits in practical application. I quickly typed “fulcrum” and “plank” in unison, and within seconds constructed a crude teeter-totter weight with the whale on the down-side. While a non-descript “boulder” was insufficient to launch the whale into the watery depths, a surprisingly compact “house” tipped the scales enough for the beast to awkwardly pitch off the pier and end the mission.

About once a year does a game arrive in which fiddling about with no discernable goal is equally, if not more fun, than the actual required mission structure. While LittleBigPlanet satiated the childish urge to fool around last year, gamers with a sense of open-ended amusement will need a DS if they want to enjoy this year’s creation. Trying to outsmart the game’s massive memory log is endlessly entertaining, and though the game could suffer from a stretched out mission structure, the prospect of having religious icons flailing against each other with medieval and modern weaponry is worth a rent alone. Charmingly bare visuals aside, few games impress this much with such little input. Unfortunately my twenty minutes of creativity was up and will have to wait until retail to see if Scribblenauts allows you to summon penises.

Winner of the Elder Geek E3 Award for: Best Way to Tell if You Know How to Spell and Best Handheld Game at the Show