Atlus could be one of the smartest companies of this generation. Why? Because of their investing in the last generation. The biggest developer / publisher still making / releasing exclusive titles for the Playstation 2 (that aren’t cheaper ports of next-gen titles,) Atlus has a major chunk of the largest install base in history practically to themselves. What could have been a lazy position of half-heartedly releasing the worst of their back catalog has instead been a final hurrah of excellent titles for the system that, for all of its stubbornness, has little time left.

Enter the latest in the Devil Summoner saga of Atlus’ prestigious Shin Megami Tensei library. Not a lot has changed since its prequel, and the quirky sensibilities of the very Japanese aesthetics are still very much in force, so can this game rise to success, or is Raidou Kuzunoha and his detective agency doomed to go down with the PS2 ship? 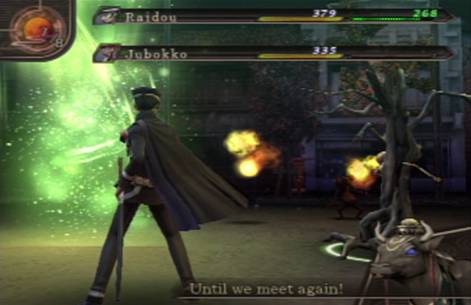 For the many that missed the original Devil Summoner – released state-side in October 2006 – you control the titular Raidou Kuzunoha (the 14th, mind you,) who rose through the ranks of the Devil Summoner family  to become a stalwart force in the war against the other-world in a re-imagined 1920s Japan. Like others in his particular line of work, Raidou has the ability to capture the physical essence of unwanted demons and confine them to tubes called ‘kuda,’ where they can then be called upon for battle or for use in Raidou’s more normal job front, an apprenticeship at a local detective agency. 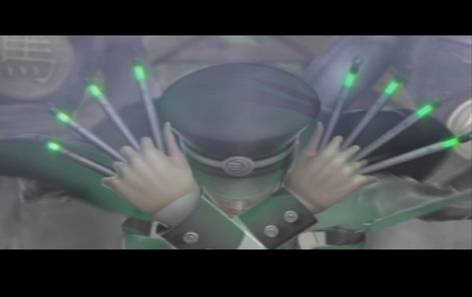 Things follow a familiar pattern in Devil Summoner 2, where yet another strange missing persons case in Tokyo acting as a proxy for something much larger, supernatural, and much more dangerous. This time around, the very end of the world hangs in the balance, as Raidou must once again gather his friends (which include his detective partner/mentor Narumi, his talking cat Gouto, and journalist Tae) and combat the forces of darkness. Instead of ancient prophecies falling into the evil hands of historical figures, the gods themselves are in on the action, causing chaos in Tokyo and disrupting the natural order.

The story is far from the usual paint-by-numbers RPG story, and its eccentricity can dip into some aspects of Japanese culture and idiosyncrasies that could be lost on even the most hardcore manga-fan. The plot looks to turn the bland dichotomy of good v. evil on its head, having you sympathize just as often with your enemy as your companions. It definitely works, and even when the narrative goes into melodramatic territory, there is always someone to relate to, and a plot point to keep interest up.

The best story mechanic this time around is the usually irrelevant character statistic, luck.
The gradual depletion of it over the game will affect your battle skills and the morale of those around you. The further you progress, the lower the general luck factor will sink, dragging down those around you into a deep despair that you must in turn keep Raidou from succumbing to. It’s an excellent method that keeps the player drawn into the world and those inhabiting it, and acts as a general reminder, and impetus, to keep fighting. The game is designed to be enjoyed without having played the original, but Devil Summoner 1 still carries a strong recommendation if you want the full experience this series has to offer.

Devil Summoner 2 has its moments of ridiculousness and points in which any Westerner will scratch their heads, but its characters are well-rounded, motives clear and believable, and a world which the player can feel a true connection to. You just might want to have a Japanese culture magazine handy.

The main gameplay in Devil Summoner 2 is broken up between exploration, combat, and subsequent demon collecting. Raidou and Narumi’s detective agency acts as the game’s hub, from which various cases can be taken on and information on various criminals and important plot points can be stored and poured over. Once a case or mission is selected, the player is launched into various locales across post-WWI Japan to traverse and battle through, occasionally meeting with NPCs and hitting upon important plot points. 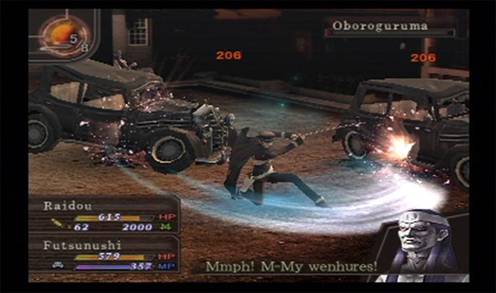 Like Kingdom Hearts and Star Ocean before it, the battles in Devil Summoner 2 unfold in real time. Atlus’ has improved what were rather loose controls in the first installment, adding more evasive maneuvers and demonic help options to create a much more balanced combat system. The player has access to the basic attack and defense options, Raidou carrying a gun and equally devastating sword for most melee combat, and the more specialized magical combat of demon summoning. The Devil Summoner sports a MAG bar, a shared mana reserve between him and the demons he has called into battle. Summoned demons have various elemental and basic attacks to call from, as well as the expected array of status ailment and healing spells common to the genre.

The game’s demon-hunting aspects play out as a more mature and story-driven form of Pokemon. Collectable demons can be swayed to join your party either through intelligent negotiation, or defeat in battle. If the demon you are hungering for a more physical negotiator, you option to capture it in one of the ‘kuda’ tubes at the end of a battle, storing them for later use. Elemental weaknesses are essential to netting the various baddies in the game, the spamming of which brings the creatures to their knees much faster than the hack-and-shoot approach. New to Devil Summoner 2 is the ability to allow your demons to aid in negotiation and non-aggressive demon acquisition, adding another reason to amass a varied menagerie. With nearly 200 possible demonic additions to your party, it’s not a quick task to undertake. Captured demons can also use their elemental powers outside of battle, wind creatures being able to teleport Raidou and the like.

Devil Summoner 2 strikes a good balance between solid real-time hack-and-slash and gotcha-catch-them-all collecting, without any of the elements feeling out of place or unpolished. It’s all been done before, and better, but the game combines the well-used elements into a refreshing mix. Tedium can quickly set in if you go for the level-grinding route, but the game isn’t too strict on enforcing that method. The battle controls are still not as tight as other action-RPGs, but it’s far from game-breaking. Devil Summoner 2 is a solid package, with something every gamer within its demographic can appreciate.

Technically speaking, Devil Summoner 2 is an extremely unimpressive game, even by the PS2 hey-day standards. Nearly every aspect of the visual presentation feels dated, bland textures and uninspired layout work drag the experience down significantly. The overall package draws attention not for any amount of blatant polish, but for an underlying effort put towards a dark and poetic style, all main and supporting characters given a unique feel and look that is immediately recognizable: half way between animated porcelain dolls and over-made-up Shakespearean performers. It won’t catch your eye on the street, but players that give it time with come away with an incredibly visceral and engrossing visual experience. 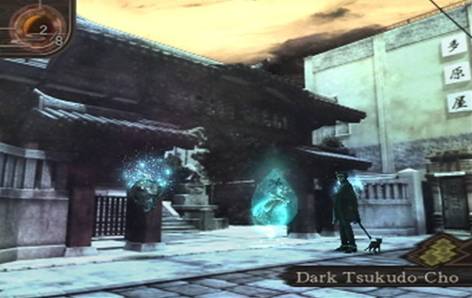 The main artistic draw to the game is Shoji Meguro’s orchestral score, which, while recycling many tracks from the original game, throws in a couple new pieces and mixes. The repeated tracks are still fitting and enjoyable, and the rough jazz of the new tracks is aggressively entertaining, easily getting into your head. The fact that Atlus reused most of the setlist, however, comes off as a sad, lazy cop-out. Sound effects and voice work are middle-of-the-road but more than functional, so the overall package comes off as a mixed bag. If this is your second devil summoning outing, it will definitely feel like a rushed product, although still retaining enough style and depth to remain worthwhile. If this is your first foray into Raidou Kuzunoha’s world, all that matters to you is that it looks, for better or worse, like a PS2 game. 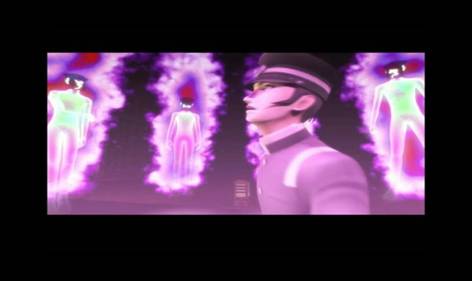 With both its gameplay and storyline requiring a decent amount of dedication, Shin Megami Tensei: Devil Summoner 2: Raidou Kuzunoha vs. King Abaddon is definitely a poor rental. If you can put forth the budget price, though, you’ll come away with a uniquely styled, strong blend of now classic gameplay, complete with a fascinating, if at times over-reaching, story. Those whose first instinct is level grinding may want to try before purchase, but for anyone else hungering for an engrossing 20-30 hour experience, you’d be remiss not to capture this belated beauty.