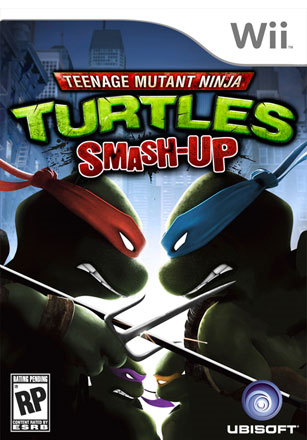 Thankfully able to avoid the four assumedly lonely men dressed up in Halloween-store Turtle costumes, I landed a quick session with the reptile-on-reptile Wii-brawler, TMNT: Smash Up in the waning E3 hours. As if the abbreviation of the famous “Teenage Mutant Ninja Turtles” moniker isn’t enough of an indication, the game takes its visual look and feel from the recent CG film based on the famous four subterranean brothers, pitting them in various locales in inexplicable combat.

The matches discussed featured me, a sweet Nintendo booth babe, and an unlucky passer-by all against each other and a 4th computer-controlled character. We played with the Wii Remote and Nunchuk, admittedly the worst scheme for fighting games on the system. Take then the complaints over the controls as temporary, until they can be compared against other possible compatible schemes. One brawl took place atop a rickety log-crafted stage in a South American jungle. Another took place on the rooftops and adjoined alley ways of the North American concrete jungle. Aside from the family of crime-fighting green dudes, the news journalist April O’Neill, the turtles’ rat sensei Splinter, and series’ nemesis Shredder were all playable and coming with their own move set. I selected the best of the turtles, Donatello, for both matches, and was eager to see how this Peter Laird-penned title would fare.

As a half-baked Super Smash Brothers Brawl clone, it played as expected, but it still disappointed. No cutscenes were shown for exposition, although the aforementioned inclusion of the original graphic novel writer should serve to spice up the relative tame dynamic the characters had in the 2007 movie. Taking what was shown though, the battle played out nearly exactly like a Super Smash match, each character magically appearing on different portions of the stage, with an opening timer clicking down as a narrator opens the battle with a bombastic “FIGHT!” 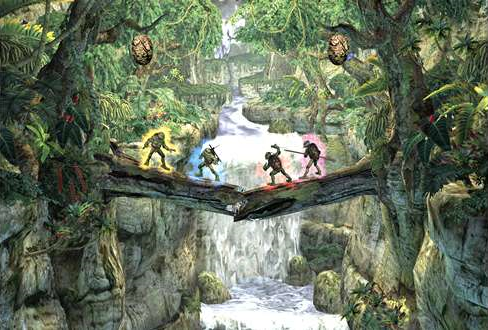 Immediately apparent is the lack of attack variety. With Donatello, all of the button implementations I entered seem to drum up different versions of the same basic moves: an upward/downward thrust of his pole weapon, a high/low kick, a rush attack, and a shoulder slam of sorts. These may be character-specific complaints, but each opponent was also spouting an equal number of obviously similar attack patterns and variety. While chaining them together did manage a couple of effective combos, none of them carried the satisfaction or challenge that the well balanced fighters of Nintendo’s first-party lineup had elsewhere. The matches quickly became repetitive. A slight edge the title managed over Brawl was, surprisingly, the camera. The characters and stages are situated well enough that the camera can remain a comfortable distance away and still keep all combatants within a noticeable and non-squint-inducing spectrum, making it much easier to track opponent movement and react accordingly. If two combatants are left, or all fighters are confined to a single portion of the stage, the camera will intuitively track in and out with enough smoothness and speed that the transition is barely recognizable.

Both the South American and the City stages featured degradable platforms, where enough hits to a chained log or sky-beam would force it to crumble and take anyone caught on top of it down as well. While adding a noticeable chunk of strategy to the gameplay, the amount of hits any of these platforms took made the strategy worthless, as just attempting a double-jump and attacking the player directly took about half as much time, and didn’t leave your fighter as open to counter-attacks.

Another touted feature of the game is aggressive environmental hazards. For example, the ground platform of the jungle stage had alligators occasionally stomp about and snatch up combatants in their jaws, killing them instantly. Again, a noteworthy attempt, but unlike other fighting games, the pattern in which environmental hazards pop up is far too erratic, especially for the younger demographic this game is intending, making each time you succumb much more annoying than it should be. 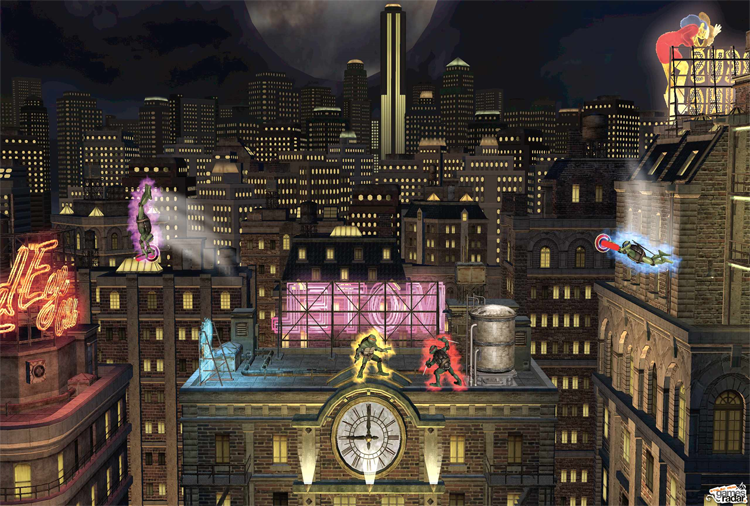 The game does maintain a steady frame rate though, without any noticeable dips or stutters interrupting either match. The lighting and environmental effects are detailed and fluid without attracting too much attention. Characters flop and fall with the appropriate-feeling weight. Their normal movements during combat do feel a bit cumbersome, especially when the characters most affected with slower movement aren’t given the benefit of more powerful attacks. But for a Wii product, Smash Up goes a bit beyond expectation to deliver a more than adequate looking product.

While the earliest screenshots let us know what we were getting, it’s still discouraging to see a prospectively powerful fighting franchise succumb to lackluster faults and cheap imitations. While TMNT Smash Up looks good and carries possible entertainment in the yet un-seen story, what was on display at E3 did little to encourage anything beyond insulting comparisons.

Winner of the Elder Geek E3 Award for: Best Way to Remember You Haven’t Played ‘Brawl’ in a While