There is a sentiment in game-making: never let Americans try what the Japanese do best. Many popular franchises have fallen by the wayside due to publishers porting development across the oceans. There is something about certain types of games that Japanese programmers and designers just seem to be more in tune with, and when Western developers get their hands on the same license, they tend to do one of two things; try to tread too close to the original mystique of the Japanese producers had and fail, or attempt to “re-define” the experience for their demographics, and fail. The Silent Hill franchise has been one of the more obvious victims of this dilemma, with its two most recent outings missing the series trademark smoldering intensity and psychologically-layered storylines by a football field-sized gap each time. Climax Studios hopes to break the trend (that they somewhat started with their PSP-bound Origins) with the Wiimote-centric Silent Hill: Shattered Memories. The good news is that the team has crafted a unique, engaging, and at times frightening experience. The bad news is: it isn’t a Silent Hill game. 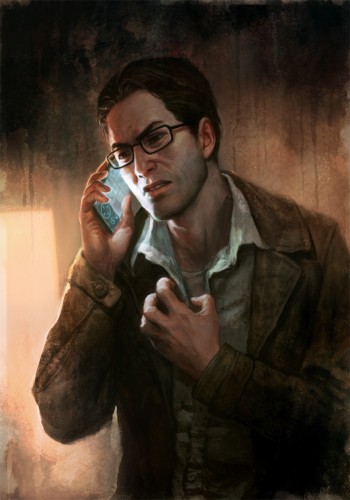 From a story standpoint Shattered Memories intends on re-envisioning the franchise’s first installment (the Elder-Geek review of which can be found here,) where Harry Mason suffers a car crash on the edge of the titular hamlet and loses his daughter Cheryl in the fog of the town’s streets. Many of the narrative’s plot points and characters are revisited throughout the playtime, including female cop Cybil. But beyond the occasional semblance flare-ups, Memories takes great liberty in filling story gaps and adding additional locations and characters not featured in the Playstation classic. Despite what many diehard fans of the series may tell you, this was a definite move in the right direction. Keeping away from the original’s overt melodrama and hokey script allows for a much more languid and natural flow to take place, aided by the game’s visual detail and depth. While many of the story’s lines can be traced back to an infinite number of film references, the believable dialogue between characters and exceptional voice acting goes far to convince players of what once was an almost histrionic plotline. 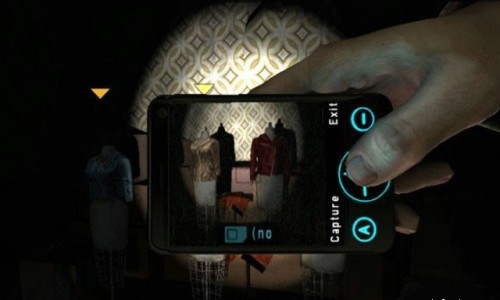 Harry's cell phone will have many uses throughout the game.

The main drawing point for the game’s console position is its dependence on many varied uses for the Wii-mote. Beyond the obvious flashlight control, players can use Harry’s all-important cell-phone (which acts as the closest thing to the game’s hud,) as well as over a dozen minute item interactions throughout the game, such as shaking and turning over a can to find a key by miming the real-life motions through the wii-mote. Sporting an almost Zack and Wiki-esque library of motions, Shattered Memories integrates them so well into the flow of gameplay, and mapped them to near 1:1 control (even without the Wii-Motion Plus add-on) that each opportunity to utilize the functionality is realistic enough to draw the player in further to the incredibly detailed world. Needless to say the PSP and PS2 version’s substitution of the analog sticks for these segments are pitiful in comparison, and while the latter merely lessens the experience for it, the former is near-broken in its execution. 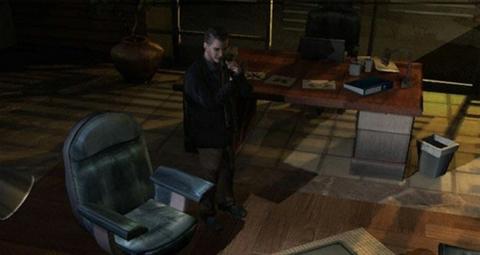 Not just confined within the bounds of Silent Hill itself, Shattered Memories splices therapy sessions within the larger experience, the segments acting as a post-mortem on the events that happened since the last session and as the occasional foreboding introduction to what will happen next. During these visits various mini-games will be presented to the player in first-person, guised as various real-life psychological tests. For example, to begin the game the player must check off boxes in a vague survey of various personality traits like social interaction and honesty. Far from the usual mini-game routine clogging the Wii’s software library, the decisions made in these segments effect aspects of the story taking place in Silent Hill, most of the time going unnoticed to the casual observer. Selecting answers that tend to characterize Harry as a more sexually repressed character will attach breast-like chests to some monsters and in turn make the female characters’ wardrobes slightly more open, for instance. Even small interactions in the Silent Hill segments will change the flow of gameplay, going into one of two unlocked buildings will offer a different pathway than its counterpart, and merely looking at strewn pictures of semi-naked women will unbutton Cybil’s police jacket in some cutscenes. It’s here that the game gains the most immense replay value on the Wii this year, with each subtle shift in gameplay adding up to several ways to play through each chapter and even each cutscene. 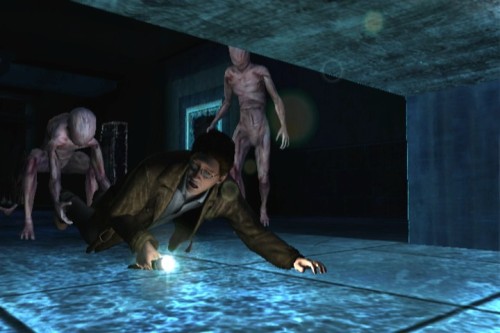 You can run, but you can't...really do anything else.

But what ties Shattered Memories had to its Silent Hill legacy are bluntly ripped away when the world begins to (literally) freeze over, indicating a gameplay shift from exploration to escape. With no weapons or means of defense in the entire game, when the levels shift it’s time to run. It’s in these icy stages that decrepit, burnt-looking monsters will jump out from cracks or appear behind opening doors to hunt down Harry. During these segments the player will have to run through a building or down the street on a pre-destined path marked by a highlighted blue outline (think of a more linear Runner Vision from Mirror’s Edge.) Almost feeling like an on-rails shooter, the segments fall all too often into trial-and-error, the monsters being far too fast to allow for more than a few missed directions or wrong turns. Harry can shake off monsters that catch up to him or light a flare to keep them temporarily at bay, but the non-combat limitations make these escapes by far the weakest point of the game. Worse still, their obvious separation from the town’s foggy atmosphere completely demolishes the foreboding atmosphere the franchise is known for, creating an almost adventure-game feeling of ease during exploratory segments. You may still dread confrontation in this Silent Hill, but it won’t be for any good reason. 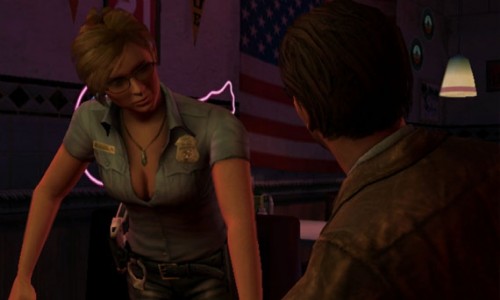 The characters animate more realistically than anything else on the Wii.

While Super Mario Galaxy may still hold the prettiest Wii game crown, Silent Hill: Shattered Memories is by far the most impressive realistic game on the system. Heads and tails above the competition, the game can easily be seen as working – with no graphical upgrades needed – on any current generation system. The world is cramped with intricately modeled props and debris that behave realistically when touched, and all written material in the game is rendered in real-time and completely readable without a separate menu. Having series regular Akira Yamaoka on board for the at times ambient, at times melodic soundtrack (sadly for the last time due to his leaving of Konami) yields the expected brilliant results. Most of the credit for the game’s visual splendor goes to Harry’s flashlight, which illuminates objects, faces, and even each falling piece of snow/ash with believable quality. Character facial animation and movement show off some of the best captures of the year, second only to the very best on the PS3’s library. Such detail in its presentation is the game’s biggest strength, and it goes a long way to recover from the hackneyed escape segments and give the experience a sense of immersive atmosphere. While pixilated edges and occasional texture hiccups arise (the ice that covers the town looks particularly bad,) Shattered Memories is simply one of the best looking Wii games in the console’s history. 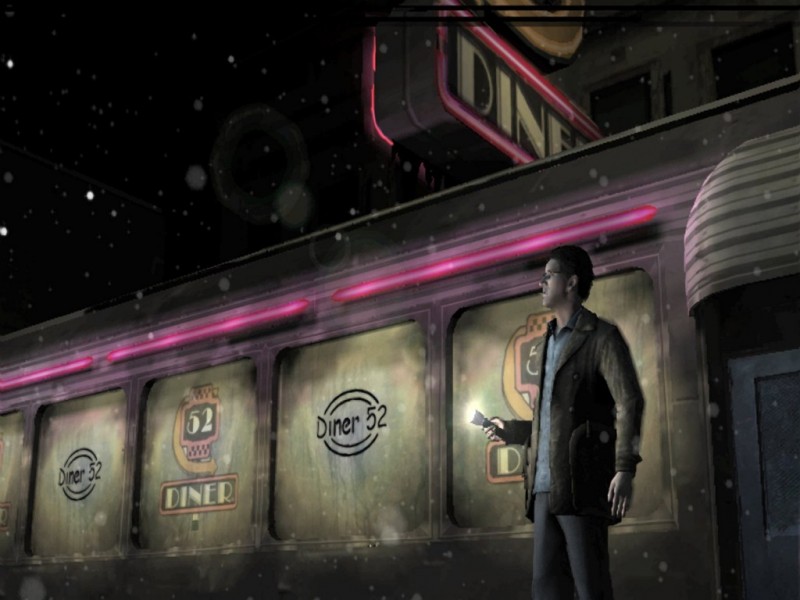 Shattered Memories is an experience that won't soon be forgotten.

Even though Silent Hill: Shattered Memories is connected to its franchise by name only, there is a superbly engrossing game beneath its lack of intensity and choppy enemy sequences. A gorgeous presentation and subtlety shifting gameplay will absorb players in for at least one playthrough, and actually mess with them psychologically at times thanks to some smart pacing choices. The Playstation 2 and PSP versions are shadows of the Wii’s setup, and are only recommended if a Wii is not owned or can be borrowed, as there has rarely been a game that turned the Wii-mote into such a well-programmed swiss army knife. It may not be the Silent Hill game fans have been waiting for, but it could be the blueprint for how the series can prosper in the current generation. It’s the most interesting reason to dust off your Wii this year, and its an experience that won’t soon be forgotten. 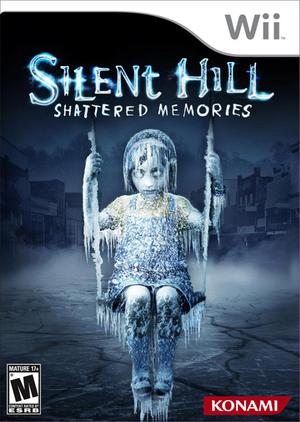