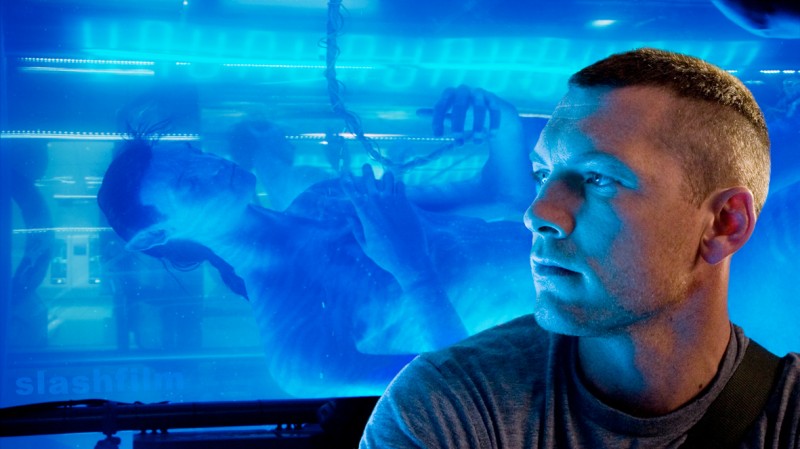 Jake Sully (Sam Worthington) next to his avatar body

With twelve years in the can and a budget just above the GDP of Columbia comes ‘Avatar.’ Beset on all sides by mountainous expectations and even grander artistic claims, this tale of digital doppelgangers and hostile imperialism has a lot to live up to. Does its 3D technology bring new scope to the world of film-making, or was this a vanity project grander than anything put on screen before?

The name of this MacGuffin game is Generic-tonium, an immensely profitable mineral resource that has brought the future of the human military to the tropically badass moon of Pandora. The rough and aggressive tendencies of the mech-suited armed forces have disrupted the natural harmony of the world and its most advanced inhabitants: the Na’vi, a race of 10-foot tall humanoid felines that just so happen to be perched atop the largest pool of Generic-tonium available. To bridge the diplomatic gap, the army has licensed out a team of scientists with their Avatar program, where selected participants can remotely control a grown version of a Na’vi body while in a state of partial cryo-stasis. 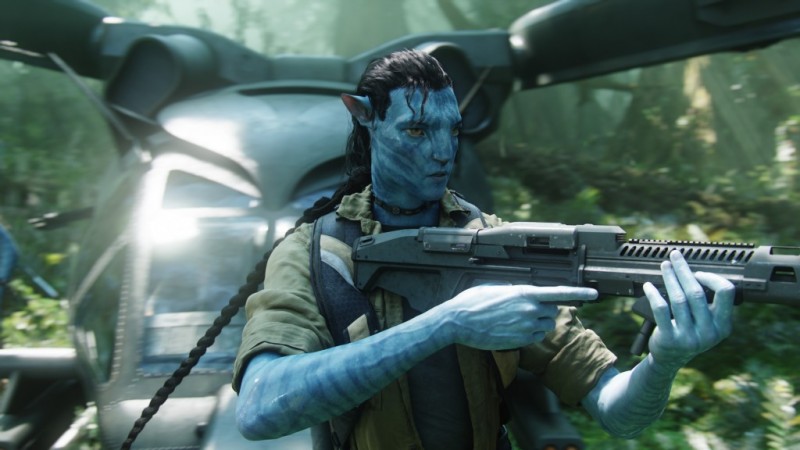 Avatar-Sully takes his first steps into the Pandoran jungle

Enter Jake Sully, a twin brother of an Avatar program participant, who takes up his brother’s tail in a deal to restore his recently bullet-ridden legs. During his sabbatical as a blue cat-person, he meets and falls in love with one of the Na’vi tribe’s most prominent females, Neytiri, their union causing Sully to shift motivations and defend the indigenous race’s land against the human invasion. Like a broken-in pair of shoes, the plot of ‘Avatar’ creases and folds in all the expected places, its predictable nature aided into a comfortable state by the film’s visuals and more intimate moments. Many viewers will despise the bluntly villainous characterization of the military and Sully’s eerie eagerness to abandon lifetime associations, but the simplistic dichotomy of good and evil set up in ‘Avatar’ allows for just enough believable motivation to string the script along to its next climactic fight scene. 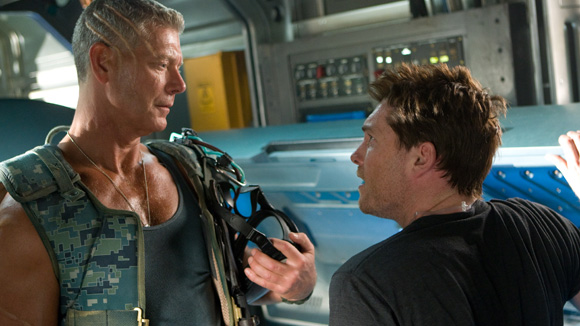 Most actors are keen to follow in the paint-by-numbers story set-up, Stephen Lang’s Colonel Quaritch being as clear-cut and rough-and-tumble as a liberal’s vision of a military bastard. Exceptions to the rule come from the female side of affairs: Sigourney Weaver’s Dr. Augustine exploring a more intricate emotional spectrum as the protected lead of the Avatar project, and Zoe Saldana’s Neytiri is an expert crafting of a creature both markedly alien and intimately human. Sam Worthington’s Jake Sully is a warm performance that manages to emote beyond the 6000-manhour CG makeover, despite his boyish naivety and stubborn rock-headedness seeming out of place with a Marine Corps of any time period. Worthington’s weakest side is the all-too-occasional voiceover his character is granted, its appearance flaring up in random occurrences, the whole device appearing to be a hasty band-aid to the holes in Cameron’s script. 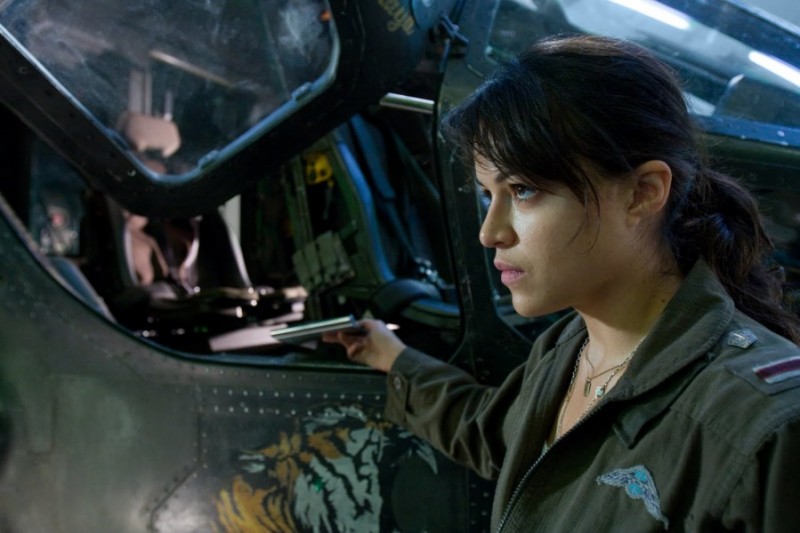 Michelle Rodriguez does her best with her woefully underdeveloped pilot character

If deeper fault is to be found in the plot progression, it is with its haphazard use of side characters. At one point Sully’s fellow Avatar-donning participant Norm Spellman (a charming Joel Moore) expresses some completely rational jealousy at the Na’vi’s acceptance of the much less-intelligent and informed Sully. Twenty minutes later an emotionally weak narration from Jake suddenly explains Spellman’s return to friendship without the slightest hint of exposition as how the emotional shift occurred. Army pilot Trudy (the always sexily badass Michelle Rodriguez) is also given a truncated arch throughout the film, to the point of her finishing the adventure on a completely pointless note; Rodriguez always seems poised on the edge of emotional complexity, before being pulled back by the leash the script has her attached to.

Even without the 3-D glasses, the heart that went into crafting Pandora is evident in nearly every frame. Despite different colorization and evolution, the flora, fauna, and creatures of ‘Avatar’ all respond and react with realistic intention and movement. The Na’vi appear especially plausible with a fully realized culture, complete with religion, social hierarchy, marriage tradition, and rite of passages. Their connection with the planet is explained through a somewhat creepy story device – the pony-tailed hair of the Na’vi sporting tentacle-like feelers that attach to (rape?) similar ones on Pandoran animals to form a bond – but as a whole, the world breaths with a palatable heartbeat that few worlds human or otherwise can claim. The sound design does an exceptional job of rooting both the human future and Pandoran present into believable audio cues, despite the bland orchestral score hitting emotional peaks with only routine, middling energy. 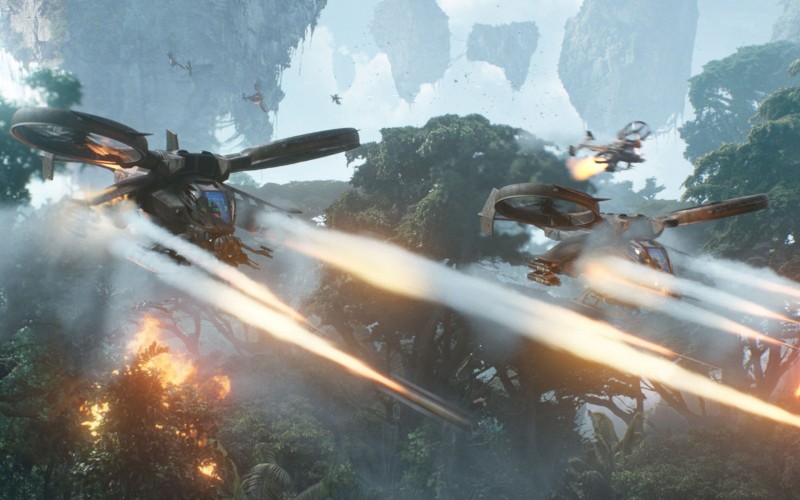 But it’s to the production stockbroker’s credit that the most visually marvelous moments of the film intersect with its best story portions. While sporting the adrenaline-arousing explosion-fests blockbusters have been weaned on for decades, it’s in the passive exploration of this alien moon that the technology behind ‘Avatar’ shines. Here we can finally see the first steps to what 3-dimensional technology should have been in its 70s origins: an expansion of the fore/background and rounding out of in-frame objects. This new depth-of-field girth allows for the lush environments and pseudo-creative wildlife (hey look, it’s a rhino with a hammerhead shark face!) to appear more natural on screen, as if filmed alongside the mo-capped actors. The Na’vi may be completely digital, but the expressiveness of the facial animation (save for Sigourney Weaver’s Avatar-face) and subtle body movements are simply astounding in their complexity and realism. While the epic battles between creature-mounted Na’vi and helicopter-bound soldiers may be what paid for the ticket price, it’s scenes like the adorable montages of Avatar-Sully’s Na’vi training with Neytiri that will be the film’s legacy. Not since ‘E.T.’ has it been this simple to associate with an unreal cast member(s.)

It’s unfortunate then that the design of ‘Avatar’ will take a back seat to the film’s eye-blistering set-pieces. In all of Cameron’s work there exists a layer of scene-craft that never fails to be criminally underestimated. The man knows how to set up a shot: framing all of Sully’s wake-up-to-being-Human scenes against lifeless computer screens humming with motorized purpose, progressively adding a subtle haze to the laboratory that contrasts dynamically with the brilliant atmosphere of Pandora. It’s in the design and cinematography that we find the sensitive components that bridges the audience’s identification of the present to this perceived future, like showing Colonel Quaritch fiddling with very-normal seatbelts as he powers up his 400-ton mech-suit. Cameron’s camera flows with equal expertise whether in full-CG or on a physical set, the former sporting more panning and tracking angles with the latter guided by a more a series of more basic static shots. It’s the hidden ingredient of ‘Avatar,’ and will unfortunately remain so in most viewers’ eyes. 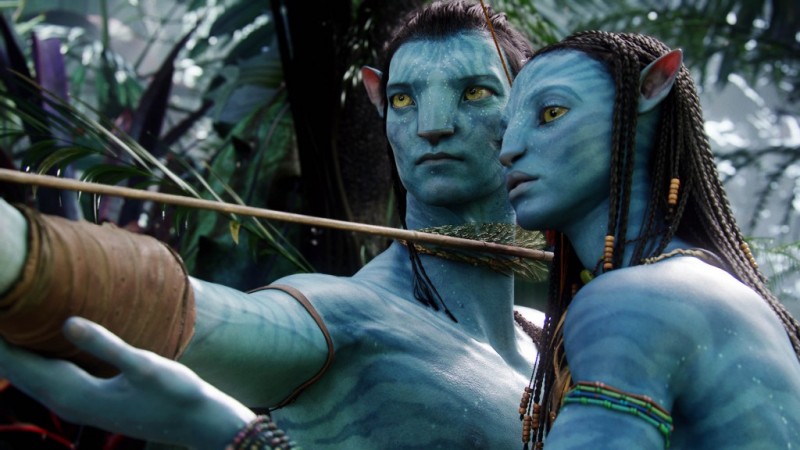 ‘Avatar’ is gorgeous escapism at its finest. Its scant story skivvies more of a flawed audience perception than an actual deterrent, the middle-moments of James Cameron’s return are rooted in a well-crafted world and exquisitely captured effects. The world of Pandora is both familiar in theory and wildly new in execution, thanks mostly to Cameron’s aggravatingly-unnoticed cinematographic expertise and a handful of performances from the female cast members. The 3-D is exceptional and finally relevant, and the sound design brings all amounts of extra-terrestrial creatures to believable life. The narration is too sporadic to be useful, and the side characters suffer some severe plot-blocking, but it all amounts to arrows shot at the hide of a helicopter. There’s a new universe on the sci-fi block, and it’s poised to dominate the scene for years to come.